a suspended state of the new 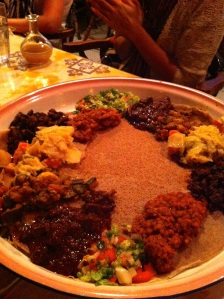 looking back, some day, all the rest of the days of my life, these seamless hours might seem a blur. but living them, waking up in a room where lace curtains blow, where the view out the window is a shingled roof i’ve not yet memorized, each and every day is in fact a living breathing experiment in the new.

the paths we cut through this enchanted city, wholly unexplored. each and every day we seem to discover a new one, turn a corner we’d not turned before. get lost for a minute. grow still, as we sink down to find our bearings.

for a girl who hums with the familiar, all this new, this suspended state of the new, is rather awakening. like a glistening rainstorm that pounds your every pore. shakes you from your long-held somnolence. shouts, wake up. pay attention. don’t get lost here.

so much newness tumbles across the tableau of a single week, it is hard to gather it all up in  my mind’s short-handled basket. just this week, there was the new school for the little fellow, the new long corridors that seemed to twist and turn on first ambulation, the new classroom, shiny, bright and filled with what might be.

there were new libraries for the big people, shadowy stacks in the bowels of widener library, where the librarian whispered, “you are now standing in one of the world’s greatest research libraries,” (and not a syllable here seems hyperbole), reading rooms the likes of which i’ve only seen in movies, say “love story,” that long-ago ali-mcgraw-gut-wrencher whose scenes sometimes unspool before my eyes as i walk this campus and think, oddly, “i’ve seen this frame before, though i’ve never walked these yards and paths.”

i am learning the vernacular of a place that calls a semester’s course, a “half-course.” i am learning that “to shop classes,” means to go and pile up your academic plate with a smorgasbord of flavors, of professors, of headline names, and stingily and voraciously grab a course to call your own. i am watching those around me make spread sheets of the seven, eight or 12 classes they intend to “shop.” i, though, pulled out a ruler, a felt-tipped pen and a sheet of printer paper, and i made myself a chock-a-block chart of my four academic courses plus writing seminars and master class.

even the simple act of dinnertime is hardly what it was back faraway home, where grammy’s 3-4-5 stew was a culinary highlight of many a week. the other night, for instance, a whole lot of us tumbled into cars and city buses and rode out to somerville, to a mecca i’d return to twice a week if i had spare change. it was ethiopian feasting, and we let our senegalese photojournalist do the ordering, seeing as his roots in western africa made him the one most familiar with the unfamiliar offerings.

three platters arrived, large baskets, draped with soft flat breads, and poetic mounds of chopped salad holding down the north and south poles thereon. the waitress, a lovely charcoal-eyed woman with a smile that caught my pale-gray eye, ferried to the platter bowls of curries (eggplant, and lamb, and spicy chicken), and lentils and potato-cabbage-carrot concoctions i wanted to scoop up with my fingers, they were so delicious. and in fact, that is precisely how we ate that night: thumbs and pincher fingers served as fork and spoon. that, and scoops of flat bread, held like a napkin in one hand, torn and used to envelop more deliciousness than i could ever muster from a fry pan.

and so it goes. new upon new upon new. an adventure from dawn till nearly midnight, when i collapse into bed, and sleep like i haven’t slept since i was maybe 9, and wore myself  out playing in the woods on a long summer’s day.

amid all the new, i step outside myself to keep watch on how i find my way. i am intrigued at how we humans grope for the familiar. how, like magnetic poles, we are pre-set to stitch french knots of the known into the white cloth of unknowns, of foreign, of i-am-paying-attention-to-uncharted-footstep.

we are species in search of mooring.

i stroll the aisles of a shoebox of a market, tucked amid 17th-century cobblestone lanes, and i am lulled by the sight of a pink lady apple, an apple whose taste i know from home. but in the next aisle, i stumble on a raisin-studded bread i’ve never seen before. and i buy it, and bite in, and am filled with brand-new deliciousness. in a single grocery, i am anchored and catapulted.

and so it goes: i find my bearings where i can, i breathe deeply, and then i turn a corner and explore nooks and crannies intended to shake me out of stupor.

some day this will not all be so intensely undiscovered. some day, there will be rhythms again. there will be shores of the known, against which the unknown tumbles, crashes.

but right now, i walk the cambridge streets at full attention.

yet the miracle might be this: even when i turn a wrong corner, i find familiar company in, say, the blue moon that last night drooled illumination on all my footsteps. it is, i imagine, the divine cupping me in holy cradle. it is the whisper of the planets, reminding me, no matter how tangled the hours and the days and the footpaths, i’ll not get lost, truly lost.

so right now, amid these early days in our year of full adventure, i am inhaling deeply, breathing in the electricity, the power surge, that comes with never knowing what’s around the bend.

today’s agenda: a morning’s excursion to the harvard business school, where i’m told the halls smell of money, a perfume that’s certainly unfamiliar to this old nose. after that, a swim in walden pond. yes, walden pond, for cryin’ out loud. who knew you could splash in thoreau’s holy waters? but here we go. crimson-spotted legs now fading to unfamiliar pink, i’ll not be too shy about sliding them deep into that pond. a baptism, indeed, indeed.

classes begin for all of us on tuesday. the sixth grader, at last, sinks into the classroom he has wondered about for months and months. but at least we now know the teacher’s name. and i will slide myself into the back of harvard classrooms, taking furious notes, plugging in my long-dormant brain cells.

and now a question: how do you seek out the new amid your world of the familiar, and in what ways does it sharpen your senses and your thinking?

p.s. last night,  for the pure joy of it, i wandered into the big white tent that was harvard divinity school’s 197th convocation. i don’t know that i’ve ever encountered so much godliness under one roof, and certainly the tent top seemed to billow heaven-ward. i was moved to tears during the trumpet voluntary, and during the new dean of the faculty’s remarks on “the fog of religious conflict.” he’s an esteemed scholar who grew up on the streets of belfast, during the long years of “the troubles,” and what he extracted from those bloody days, how he has catapulted tragedy into a worldview of peacemaking was, frankly, breathtaking. i will close with his closing challenge: “be actively engaged in peacemaking in all aspects of your lives.”

amen. amen to all that.

5 Comments to “a suspended state of the new”