boxing up the bookshelf

this is an early draft of a meandering i wrote in the fall of 2016, one that became an essay, Boyhood on a Shelf, that ran, blessedly, in the new york times book review on april 9, 2017. it’s escaped in draft form a couple times already (only for a flash of a moment before i nabbed it and lassoed it back here, where it’s been dawdling), and this time, i’m letting it go because the idea of curating a collection of timeless children’s books is one i believe in, and because i’d love to hear what titles you’d include in such a library.

the titles — the hobbit, tom sawyer, the cricket in times square, my father’s dragon, the tales of narnia, a boxed set, harry potter and the sorcerer’s stone, the phantom tollbooth — one by one, each sent a volt of varied wattage.

the american boy’s handy book, for instance, daniel beard’s 1882 instructional for boyhood, “a state of natural savagery,” with its directions on how to build a pine-branch house or a birch-bark canoe, with its instructions on fishing for fresh-water clams, constructing a miniature boomerang or a wooden water telescope, or simply extolling the novelties in soap bubbles, it began to wobble my knees. i remembered the day i’d first spied the centennial edition at a beloved bookshop and carried it home, intent on giving my boy the most old-fashioned life of adventure, and a sure guide to survival as well.

my father’s dragon, the mid-20th-century trilogy of dragon stories from ruth stiles gannett, it had me in tears. as soon as the pillowy pad of my fingertip rubbed against its worn-smooth spine, i was flung back in time, wedged bum-to-bum on the bedsheets, snug against my then-beginning-to-read firstborn in his four-poster bed. turning pages, taking turns turning the pages, his eager fingers pinching the page’s corner, my lazy hand patiently waiting. the bedtimes when words began to take form, when pen-and-ink illustrations were seared into memory, collective memory, his and mine, at once distinct and enmeshed. the bedtimes that colored so many dreams, storybook dreams.

i couldn’t bear to let them all go, so deeply ingrained they were with a life i had loved, a life passage now being tucked in a box, transported miles away, and slid onto a grown man’s bookshelf, alongside tomes on law and philosophy and literature, subjects he now trades in, now is schooled in, subjects that now plot his trajectory.

and as much as i ached to ease them off the shelf, i was heartened to know — deeply — that they mattered to him. that he wouldn’t be home, wouldn’t feel home, till his books — his whole lifetime of books — were tucked on the new shelves in the new place he calls home.

that’s what the books of a childhood, of a boyhood, do: they forever bind us. and, ever after, they take us back, separate and together. they return us to long-ago, to once upon a time.

of all the playthings of my children’s childhood, it’s the books where we shared the most time. trains, my firstborn played with often alone, me off in a corner, occasionally lending a guttural chug or a choo or a whistle, or, later, when he was old enough to imagine all by himself, i’d be down the stairs and around a few bends, rattling around in the kitchen.

but the books, the books were where we nestled, where we sank in deep together. the books are where our hearts did so very much of their stitching together.

and so, the pages of the books — the pictures, the covers, the crinkled dog-eared edges — those are the relics, sacred relics of the years when i was keeping my promise to open his heart, to infuse the beautiful, the gentle, the wise. and the books were my guideposts, my road marks.

the books of my little boys’ beginnings, they were the holy scripture that whispered the lessons i prayed they would learn: ferdinand, the gentle bull? be kind. be not afraid to march to your own music. harry potter? believe in magic. the tales of narnia? defend what is good. tom sawyer? roam and roam widely. and never mind if you tumble into a slight bit of mischief.

no wonder, of all the stacks of clothes, the contents of a desk drawer, and all the other shelves of books, the only one that made me wince, the only one i thought i wouldn’t be able to pack away, to let go, to watch glide out the door and into the glimmering downtown tower that now is home to my firstborn, the only one that stopped me in my tracks was the shelf of my firstborn’s boyhood.

not one to sulk for too too long — only after brushing away the tears i kept to myself — i hatched a plan: as one taketh away, so one receives. as i slapped the long serpentine wrap of packing tape across the top of the book box, i promised myself i’d build a new library, one built on the blueprints of children’s librarians who’ve culled lists of the best of the best. the new york public library’s 100 great children’s books. my little town’s own librarians’ roster of classic picture books, and classic novels, grades 2 through 5, and 5 through 8.

i’d make it my mission, my task of enchantment, to map the quaintest of used book shops. i’d scour the shelves for a particular roster of titles. and, one by one, i’d re-build a collection, a curated collection of children’s books that stand the test of time and, most of all, heart.

in the hours of my heart’s tugging, when the boy i love was moving away for good and likely forever, the one balm i knew to apply was the balm of the bookshelf, the balm of construction, of building, amid the act of dismantling, of packing up and moving away.

it’s not an assignment that comes with a deadline. it took years — and the accumulated wisdom of countless bibliophiles who, over those years, slipped titles into my hands with a knowing nod, or the question, “have you seen this one?” — to build that shelf in the first place.

and it will take years, and the deep joy of engagement, to build the one i’ll bequeath to both my boys, and whoever might be the next little readers to come toddling along.

what titles would you be sure to include if you were building the essential children’s bookshelf? 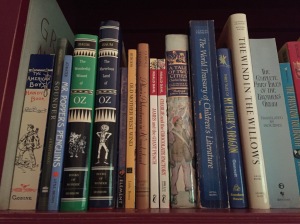 the trouble with sleep

if we were in the tv listings, it’s not clear whether we’d be pegged as tragedy or comedy. let’s call it the tragi-comedy that wouldn’t quit.

it started, as many prime time episodes often do, innocently enough. the antagonist (that would be me) duly bathed, and read and prayed with sir protagonist (that’s him up above, but that’s getting way ahead of the script).

there was the usual kiss on the head, the “sleep tight,” as sheets were pulled and tucked one last time, the “see you in the morning,” tossed over the shoulder as mama antagonist sauntered out of the room, hit the hall light and thought she’d have, oh, maybe an hour to herself.

she had barely rounded the kitchen corner, barely wrapped her hands on the popcorn she’d be popping, when the first plaintive wail came wending down the stairs.

something about a back rub.

antagonist, being mean, shot back a simple: “go to sleep.”

teetering between tenderness and needing to cork the noise, mean mama softens–nay, relents–and ascends for what at best might be termed a 15-second swish of palm to little back.

just enough time for little mastermind to toss his next attempt at barring sleep. this time something about being lonely. needing cheetah. mama rolls her eyes. in the dark, he must have missed that.

she retreats to office. he, apparently, set off to nighttime jungle, where, big hunter he, he procured the big cat of his desires. which is what you see above. the trophy moment, caught on film. marlin perkins couldn’t be more proud.

if memory serves me right (these nighttime dramas make me foggy-headed, they twist and go so long), there were these added bumps in the weary road to sleep: the cheetah, it seems, was not enough. soon all the friends were needed. which, then, precipitated the problem of needing sleeping room for entire mattress menagerie.

at quarter ’til eleven–egad, if i believed in caps, those last three words would have been big and raised–his animals apparently lined neatly in a row, stretched from one end of the bed to the other, young sir protagonist tiptoed in the dark to where i sat typing. he sidled up quite softly, whispered in my ear, so sweet he took my breath away: “i have a little problem. i have a pillow for all my friends, but now there’s no pillow for me.” dropping his whisper even lower, he offered his solution: “i’ll grab a little couch pillow.”

as he wandered out for pillow fetching, he turned to ask me this: “what does cardinal start with? what does st. louis cardinals start with?” the boy is learning letters, and apparently at that late hour, all barricades are lifted, and thoughts just flow like cars cruising late-night streets.

yes, yes, at last, the house was quiet. (but not before two music boxes crashed onto the ground at an hour i won’t disclose, promptly–i assure you–propelling me off my chair and up the stairs to see what the bleep was the matter. what in heaven’s name? was he cranking lullabyes for pillow-hogging critters? alas, i did not ask. i had firm tucking to attend to.)

yes, yes, with that crescendo, our little drama ends. the late night rambler, cat in arms, finally quelled his rambling soles deep beneath the covers.

i never did get mad. it was all too charming, a charm perhaps only a mother could love.

i can hear you shrieking. i might hear you dialing dcfs, the folks in illinois who protect little ones, god bless them deeply.

but before the sirens blare, before they cart me off, might we pause and ponder just why the dark abyss of sleep feels so deep and bottomless to a child who clings to light in any form? why some nights is the settling to bed so agitated an exercise that all are worn and wounded before it winds to its hushed-at-last conclusion?

in my house, both boys come by disdain for sleep, well, rather honestly. naturally, in fact. i would be one who, if she could, would round the clock with nary but a nap. i love early morning. i love late night. that leaves little room for dozing in the middle.

the trouble with sleep, as i see it, is you get so little done. i find every hour has its charms. deep down, i think, i hate to miss a minute of this blessed thing called life.

and so, my little children just might think the same. no wonder i was charmed by the litany of pleas that kept the cheetah hunter prowling deep into the dark of night.

and thank heaven for kindergarten in the afternoon. while he sleeps off his prowl, i get the morning to myself.

pssst….it’s not always so drawn out. this particular protracted bedtime was truly made for tv. sometimes these episodes simply shout to be recorded. and you can always change the channel. though, of course, i hope you’ll stay tuned. in fact, i know there are other bedtime dramas out there. any takers in the fine art of telling bedtime tales?