Category: ode to a food 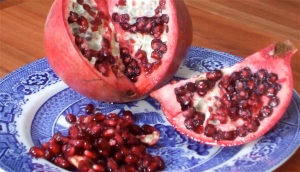 we interrupt our regular programming to bring you this flash from the fruit stand: the pomegranate is fleeting. it’s on its way out. it’s days they are waning. counting down, less than two weeks to go.

so while it’s here in our midst let us ponder the pomegranate, seeded wonder, fruit you must work to get into.

if ever there was a fruit that deserved to be pegged “the enchanted,” this would be it. the pomegranate. literally, “apple of many grains,” aka seeds.

oh, the seeds. 613, if you believe the torah. or, pretty close if you count. i know someone who counted. and lived to tell about it.

yes, it’s the fruit that i hold in my palms as if i am holding a treasure. and i am, really. have you ever peeled back the leathery, red purse-skin? popped out the shimmering gems? brushed back the blood bath of pomegranate splattering all over your counter, all over your chest, all over everywhere and beyond?

by the time you are done popping your pomegranate, you need a bath. and you look like you need a good defense attorney.

in the beginning, it was a fruit of persian persuasion. trekked to the himalayas. rested a spell in armenia. shriveled-up fruits, three-millennia-old, prove that last archeological morsel.

back to the bible, we are told the israelites, those wandering jews who dashed out of egypt with nothing but their unleavened bread, so missed the fruit, that ol’ moses himself had to assure them they would once again meet up with it in the promised land (deuteronomy 8:8).

and let us not overlook the legend of persephone, daughter of demeter, goddess of fruit and fertility. the pomegranate takes a star turn in this tale. seems hades snatched poor persephone into the underworld. demeter protesting her daughter’s potential demise, shut down all fruit bearing on the planet. persephone, pouting, vowed not to eat until she got out of hell. well, she let slip six pomegranate seeds between her lips, down her throat, into her belly. further punishing the punished, persephone paid dearly for swallowing those six seeds; she was forced to return to the underworld for six months out of every year. each time she went down, her mama shut off all fruits. thus, the seasons of summer and winter were born.

all thanks to the red leathery fruit with the seeds that prove too laborious to many.

ah, but to the dogged, the seeds are worth pursuing.

my own personal pomegranate intrigue started when i learned from a lubavitch woman, a supremely orthodox soul preparing her rosh hashanah feast for herself and her 13 children, that the pomegranate was prime, for it held in its belly one seed for every mitzvah, or each of the 613 commandments, in the torah.

since then i indulge every year, september through january. popping those blood-red seed pearls is a bit of a shock in the pre-dawn light. and yes, i have splatters on half my white shirts. but to sit down to a plate sprinkled with gems is to feel pulled back to ancient persia.

i heard a trick for seeding that saves the blood bath. dunk pomegranate in deep bowl of water. run thumb through thicket of seeds. they plunk out into the bath; so does the crimsony juice. yup, it’s clean all right, but i give it thumbs down: the seeds to me are lacking their deep ruby shine, their taste is too watered-down.

i’ll take my pomegranates, along with their original sin.

here are just two ways to use them, both simply sublime. both from my friend susan f., who cooks like a jazz singer. toss her a note, and she takes off, climbs the scales, scats all around. oh, and she too has trekked the himalayas, so she comes by the pomegranate naturally.

for a simple repast, she casts ruby red seeds atop a mound of thick creamy yogurt. preferably the whole-milk variety, the kind with the thick creamy crust you must dive through with your spoon to get to the vanilla-y middle.

i swear i had a beef stew with pomegranate at her fine dinner table. but she says she has not a recipe. she imagines one though. and it goes like this:

she imagines “one with your hunk of meat, trimmed of course, cut into perfect bite size cubes, brown meat in a skillet with a little olive oil, don’t cook all the way….then toss into dutch oven with chopped celery, those beautiful pearl onions, bay leave, thyme, dashes of cumin, red wine and pomegranate juice, cover and bake for awhile, after half done add the pomegranate seeds and chopped walnuts, serve with rice and sauteed green beans. ok?” she asks, wrapping it up.

behold the pomegranate, people. behold the fruit that makes it hard to get into. but is totally worth the price of admission.

please, please share your pomegranate secrets and passions…in just days we’ll have nothing but their blood-red stains, refusing to go. then we can talk about outsmarting the splatters, unless of course you have the cure for that this very day…