undulations of the everyday

and, zap!, like that we’re back to the real world. the everyday. cinderella sweeping the hearth after the ball. our sparkly slippers are somewhere left behind, though the sparkliest shoe i’ve ever slipped on was the mary jane i polished with a glob of vaseline back back when i was about to see my grandmama (she who would notice such things, who would remark on a gloss-less mary jane).

one kid pulled out of the station 12 days ago, is nestled back by his keyboard in connecticut, churning out words as a foreman in detroit once churned out carburetors and mufflers. only my kid’s business is complex legal puzzles, ones i stretch to comprehend. the other kid, the one still kid enough to let me make him one last batch of his favorite mac-n-cheese, he’s in countdown mode, leaving just the other side of this wallop of a storm hurling our way.

the tree, my sumptuously fat fraser fir of a tree, it’s missing from the corner it’s lit up these past three festive weeks. it’s stripped naked and currently residing on its prickly limbs, toppled by the winds that are hurling forth that storm. for now, it’s just outside the kitchen door, my way-station of sorts, a mid-point when i can’t quite bear to haul it shamelessly to the alley. 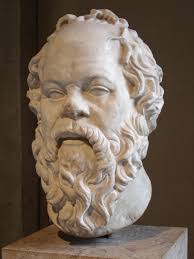 i’m back to my business of books: reading them, writing about them, maybe even writing one or two in the year (or years) to come. somehow i seem to have made it my business to read with a ferocity that teeters toward insatiable. one big thinker leads to another and another, as if i’m the freshman in college and my curriculum is as old as the ages. this week, somehow, it was socrates under whose trance i fell. i can’t stop thinking about the bug-eyed thinker whose devotion to big ideas, to the why behind it all, got him a big ol’ spoonful of hemlock, and it makes me wonder why it is we as a human race are so quick to expunge the ones who think outside the box, the ones who try in vain to correct the course of human decency and depth.

because it’s the new year, i tackled my wild herd of books unread. i lined them up in little piles, marked certain ones with a sticker of urgency. i galloped through a few of those: mary oliver, first up; thomas berry, next. david whyte’s essentials, a wee slip of a book proving what comes in smallest packages might well pack the biggest wallop. it’s a collection of his poems from a span of 35 years (collected by his wife, which adds a note of devotion that melts me), and each one comes with a whisper, whyte’s from-the-wings tale of how and why the poem came to be. whyte is a poet-philosopher with a degree in marine biology, making him exquisitely trained to look and look closely. this line from the flap jacket gets at my devotion to him and his work: “this collection…forms a testament to whyte’s most closely-held understanding — that life cannot be apportioned as one thing or another; rather it is best lived as the way between, made beautiful by darkness as well as light, at its essence both deeply solitary and profoundly communal.”

Start close in,
don’t take the second step
or the third,
start with the first
thing
close in,
the step
you don’t want to take.

Start with
the ground
you know,
the pale ground
beneath your feet,
your own
way to begin
the conversation.

Start with your own
question,
give up on other
people’s questions,
don’t let them
smother something
simple.

To hear
another’s voice,
follow
your own voice,
wait until
that voice

becomes an
intimate
private ear
that can
really listen
to another.

Start right now
take a small step
you can call your own
don’t follow
someone else’s
heroics, be humble
and focused,
start close in,
don’t mistake
that other
for your own.

Start close in,
don’t take
the second step
or the third,
start with the first
thing
close in,
the step
you don’t want to take.

whyte writes in the poem’s afterword that it was inspired by dante’s commedia, and “it reflects the difficult act we all experience, of trying to make a home in the world again when everything has been taken away; the necessity of stepping bravely again, into what looks like a dark wood, when the outer world as we know it has disappeared…”

david whyte, it seems, is a very fine way to enter into the undulations of the everyday, the ones that follow, one after another, after another…

bless you in this new chance to quietly, certainly, begin again. may your journey be intentional….

who will be your guideposts through this new and fresh terrain?