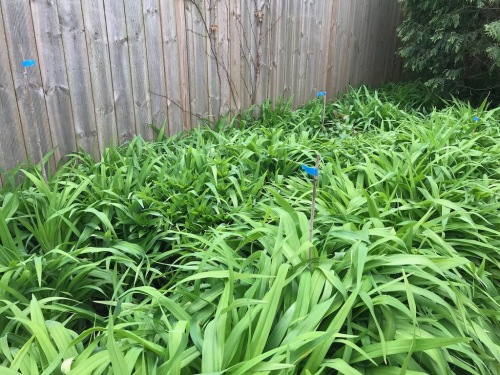 annals of pandemic, part xi…in which surreal spring turns to summer and we set out to build a farm…

you might begin to wonder if the dictionary at my fingertips is one in which the definitions come fast and loose. if, say, there’s hyperbole stitched in on occasion. or, is it simply the byproduct of one storybook imagination?

where, for instance, i start waxing on about a farm–so you start imagining endless loam, far as the eye can see, and perhaps a barn and silo, certainly a mooing cow with muzzle pressed against the pasture gate–and then you realize that what i mean, what i’m setting out to carve into the earth, is nothing more expansive, nor more exotic, than a plain old raised bed. a 4×8 plot of decayed leaf and loam (and for good measure a pile of old manure). a mound on which to sprout a vegetable or two. perhaps an herb, for good measure.

in other words, in the world inside my head, the one where my very own picture shows play all day long, what i see might not be exactly what’s before my eyes. (effusive and sometimes far-fetched imagination is requisite number 1 for anyone who dreams of a life of pen to page, i’d argue.)

fact is, for all my daydreaming about white picket fences and tomatoes so fresh from the vine they’re still sunshine-warmed as i unscrew them from the stem, this so-called plot for which i lift my spade and hoe, might well become little more than an exercise in rolling out a romping ground, a banquet hall, for all the critters who nightly prowl along the hardly bucolic back alley.

which brings us to calumet farm.

as is sometimes the case in a writerly family–in other words, a motley crew of folk who relish words with the enthusiasms others reserve for, say, wine or dollar bills–the tangled knot of daylily, weeds, and the occasional errant acorn-on-the-rise has already been named, though i’ve not yet hauled a single shovel to the plot. (that’s this morning’s project, putting blade to earth.) 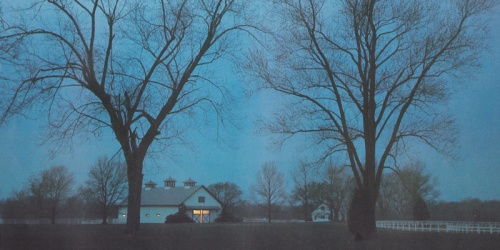 calumet farm, you see, is a magnificent kentucky horse farm, one my uncle danny used to run before he was killed on iwo jima in a brutal midnight raid near the close of world war II. it’s a farm where two triple crown winners–whirlaway and, later, citation–and, in all, eight kentucky derby winners ran the fields. it’s a farm where my very own papa spent his every boyhood summer, curled up reading near the barns, so the story goes. 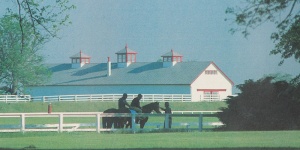 and my beloved bespectacled mate, the one i hoped would not mind my latest fixation, well, he latched right on–enthusiastically!–once we gave him naming rights. he’s downright tickled to have our very own calumet farm sprouting on the back acreage (even if he is insisting i hoe along the alley, where it won’t disturb his line of sight. p.s. what he’s otherwise looking at is beyond me, all i see is grass and birds nibbling at the feeder…but such are the compromises that make a lasting marriage). 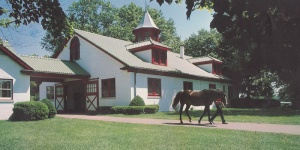 i believe i’ve heard him say he’ll be posting the calumet colors–famously “devil’s red” tracing the sharp edges of the pure-white barns and stables. (calumet was founded by the baking-powder folks, and to this day, that can is trademarked devil’s red.) if naming rights and colors are all i had to trade to get me a summer’s worth of fresh-plucked herbs, and one or two tomatoes, and all these hours of imagining, well that’s a deal i’ll make.

because these distractions of mine can sometimes take up more room in my brain than necessary, because i barely know my way through the tool shed, my faraway brother david, a master gardener, master carpenter, and all-round mensch, took on the role of patron saint of my plot. he’s spelled out in precise detail just the bolts and boards i need. even weighed in late last night on the contents of the 18 bags of loam and compost i’ll be mounding for the farm. when my biggest worry was whacking down the weeds, he scratched that with a simple, “google sheet mulch.” turns out those old moving boxes flattened in the garage will now be resurrected as the “floor” beneath my mounds. all i need do is slice away as much of what’s growing there, yank out roots that might have landed there over the years, and lay down sheets of cardboard. voila. instant start of compost.

once construction is done, and ben-gay amply applied to all my achy parts, i’ll begin the daydreams of what to plant. of course i picture some quaint english herbarium, as well as a bursting-with-a-vengeance vegetable plot, to boot. but truth be told, just one fistful of fresh-born dill or mint or basil, abundant and green and smelling of the earth, that’ll be enough to do me mighty proud.

there is something edifying about going beyond the confines of what you imagine you can do. and building me a farm, even a simple one by arithmetic measure, and doing so when up against an invisible plague that’s turned us upside down, it brings a sustenance you cannot buy at any grocery store.

maybe, too, it’s the turning in, the reliance on little more than our own muscles and our know-how. it’s staking a claim in this old planet, saying i can make my way here. maybe it’s emboldening in the age of pandemic to write your own survival guide. and, once again, to lean on the blessing and benevolence of this holy earth to carry us to safe-keeping.

best of all, my humble plot will always be the farm my brother david believed i could build. and his insistence, his quiet whisper, his certainty, is the bounty upon which all this will grow.

and now i’m dashing to the lumber yard, where a kind and gentle man named mike has all my boards and bolts ready to stash into the old red wagon, the wagon i will now think of as my very own farm truck.

what plots have you devised–amid this pandemic, or otherwise–to reach beyond your comfort zone, to show yourself the self-reliance at the heart of who you are, to prove to yourself you’re more than you imagine? 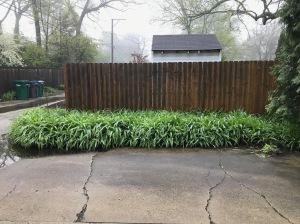