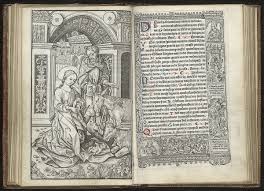 except for the centenarians among us, this is our first go-around with pandemics. and so, uncharted as it all is, little should surprise us. i stand somewhat surprised, though, that somehow — in the depths and folds of these blurry hours, where day upon day feels indistinct, where were it not for the winding of clocks on wednesdays, the old-lady shop on thursdays, the watering of plants on saturdays, i might never know what day is unfolding around me  — i seem to have tumbled into an ancient, ancient practice. one rooted in the quiet turning of pages of glorious books. one rooted in prayer, in the sanctification of time, the anointing of hours.

it must be the little old monk in me.

i am utterly transfixed by the notion of the liturgy of the hours, the divine office (opus dei — the work of God), lauds, vespers, compline. morning prayer now begins my every day. morning prayer with candle burning beside me, casting its flickering light on skin-thin pages that turn with a crinkle as i slide the ribbons from section to section: invitatory, psalm, antiphon, collect, confession, thanksgiving.

the lexicon is almost as old as time. the notion of fixed-hour prayer, paying keen attention to the seasons of the day — the shifting of light and shadow — is a practice shared by all the great religions: buddhism, hinduism, islam, judaism, christianity.

the early christians borrowed it, of course, from the jews, who were commanded to pray the holiest prayer, the sh’ma, upon rising and retiring, and who stitched 100 blessings into the arc of the day, lifting the most quotidian of acts — washing hands, hearing thunder, beholding the bloom of the almond tree — into the realm of the holy. the psalms, written by the most brilliant hebrew poets, were read by jews — including jesus and his earliest disciples –as “encounters with God, as stimulating and nourishing a spiritual mystery,” according to william storey, a liturgical historian.

by the fourth century, in the early roman empire, bishops instituted morning and evening prayer in the early cathedrals. in the sixth century, along came st. benedict who wrote down “the rule,” and with it the trellis of prayer that infused the monastery, calling the monks to arise in the darkness, to walk under the cloak of stars to the oratory where the night vigil was sung, and through the day, when the great bell was rung, to drop their work in mid-act — be it the stirring of soup, or the tending of bees — and encounter the angels in the sung prayer of the psalms. (i love that benedict refers to any chiming clock as a “portable monastery,” and instructs that “every chiming hour is a reminder we stand in God’s presence.” i will now consider myself to be “winding the monastery” every wednesday and sunday morning.)

all these centuries later, little old me picked up on the notion about six weeks ago. (no one ever pinned me precocious.)

what i know is this: tiptoeing down the stairs in the dark, hoisting my 2,974-page leather-bound tome, striking a match, kindling a wick, bowing my head, breathing in silence, it grounds me, and infuses my day. even my dreams, some nights.

reciting the words, inscribed millennia ago, whispered by generations before me, from all corners of this wobbling globe, beginning with a daily confession of sins, bends me into a posture of humility that seems so necessary — so countercultural — in this awful, awful age of much too much bombast. i’m enchanted. i’m sometimes disturbed (the god of biblical vengeance is not one i know). i’m always, always quieted. set straight for the day. beginning my day in the recitations launches me into the holy work st. paul instructed: pray ceaselessly. make the work of your day, the quiet of your day, make it all living breathing prayer.

i’m not alone in my preoccupation. rilke and ts eliot, hildegard of bingen and kathleen norris, certainly thomas merton, all were drawn to the undulations of stillness and prayer.

brother david steindl-rast, in his glorious little book, music of silence, writes that monastic prayer is a tradition “that regards each hour of the day and night as having its own distinct message for us.” he implores: “make everything we do prayer.” hour by hour, from night watch’s invitation to “trust in the darkness,” to laud’s morning question — “whom can i make a little happier” in this gift of a new-born day? — brother david draws us into the certain knowing that hour upon hour begs our attention, invites sharper focus on divine intention.

it’s all the sacred practice of paying attention. beholding the beauty, the blessing of each anointed minute and hour. in the same way i’m gobsmacked by the shifting of seasons across the year, i am rapt by the seasons of light and shadow in a day, the invitation to be immersed in each hour’s offering.

i turn to that brilliant radiant rabbi whom i revere, abraham joshua heschl, for one last illumination here, one to carry through this whole blessed day:

he who has realized that the sun and stars and soul do not ramble in a vacuum will keep his heart in readiness for the hour when the world is entranced.

for things are not mute:

the stillness is full of demands, awaiting a soul to breathe in the mystery that all things exhale in their craving for communion.

a few of the books i’ve been burrowing into, include these:

and, if you’d like to poke around online, and hear magnificent gregorian chant (a meditation for another day) try Brother David Steindl-Rast’s Angels of the Hour

how do you anoint the hours of your day?

25 Comments to “anointing the hours”