the underground and me: how my papa tried to save me 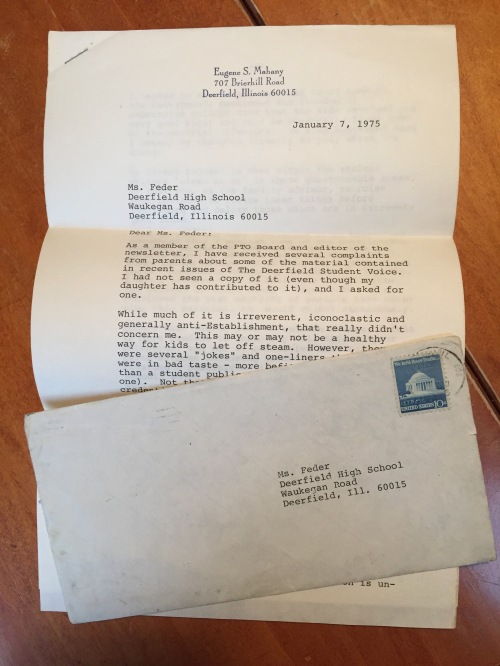 the first draft of history is what journalism’s been called. and so, today, i take a crack at one such draft; i write not knowing quite what epiphany will come, toiling more as an excavator, seeing if there is any shimmering shard buried in the layers of history, my history, a piece of which recently unfolded — in three crisply typed pages — and stirred up the long long ago. turns out, it’s a love story…

it’s not everyday the artifacts of your past tumble out of the cracks of history. but one of mine came in the mail week before last. it was a letter, dated january 7, 1975, written by my papa, mailed to a beloved high school english teacher, a teacher i remembered most vividly because she was the one who asked a prescient question the monday after homecoming of my senior year, a question that foreshadowed the arc — the heartbreaking arc — of that last year of high school.

what i’d remembered was that she was the teacher, the arch, very cool at the time, teacher who’d assigned kerouac and burroughs and zen and the art of motorcycle maintenance, works with their thumb on the pulse of the thrashing that was 1970s america. what i’d never forgotten was standing outside the library on the monday morning after i’d been crowned the homecoming queen, an unlikely event if ever there was because i was nothing like most homecoming queens. i was not beautiful, not even close. i wasn’t a cheerleader, or one of the pompom girls. all i was was kind. and i remembered the names of just about each and every someone in my 2,400-student high school. and all the janitors, too.

as i was standing there, this teacher we all loved and were afraid of, in equal measure, strode up to me, raised one eyebrow, and volleyed her question: “barb, have you read ‘the demise of the homecoming queen’?” a book apparently with a very bad ending.

consider me unsettled. i answered no, and marched on with my day, the query sufficiently stinging.

but that odd interaction has nothing to do with the letter i got week before last. it only underlines the impact of running into this teacher at synagogue a few weeks back, on rosh hashanah to be exact, when a woman whom i did not recognize, leaned into our pew and exclaimed, “barb!!!!” while my brain gears churned to figure out who in the world this was, she went on, and soon i realized it was ms. feder, the high school english teacher we all feared and loved.

as i climbed over the legs between me and the end of the pew, so i could leap into the aisle to hug her, she went on with a story she was bursting to tell me. (mind you, i’d seen her only one other time in 43 years, when i bumped into her on a train riding downtown and i was carrying a baby, so this encounter was swiftly sweeping me back in time and space and emotion.)

she’d been cleaning her basement, she recounted, barely pausing to breathe, and was rummaging through piles and years of stuff accumulated, when she unearthed the first-ever issue of mother jones magazine, and as she lifted it from cobwebs to give it a look, out from its spine tumbled a 10-cent-stamped envelope addressed plainly to “Ms. Feder, Deerfield High School.”

inside, was a three-page letter from my very own papa, meticulously typed by his secretary of many, many years. in it he explains in thoughtful measured tones that it had come to his attention that the underground newspaper, for which ms. feder was the faculty advisor and to which i was a contributor, had recently raised a few eyebrows. scatalogical jokes, perhaps. he didn’t exactly detail, except to mention that they might be “in bad taste — more befitting bathroom walls than a student publication (even an unofficial one).”

and then toward the end of said letter, my papa takes off his official hat — he’d been writing as a member of the PTO board and editor of its newsletter (of which i have zero, zip, nada recollection) — and mentions that, on a personal note, he has exacted from me a promise that my name would no longer appear on the masthead (my first foray into journalism outside the walls of our basement, where i typed up the neighborhood news complete with comics, was the underground newspaper of our not-so-radical white suburban high school). he went on to write that “I have told her [that would be me, his scribe of a daughter] that I feel that her material has been completely acceptable and in no way of questionable taste.” but — brace yourselves — “Frankly, I am embarrassed to see her (and my) name in even a loose juxtaposition with some of this material.” and he asked that my name be deleted from any future publication.

apparently, that’s when i went even further underground and assumed the pseudonym under which i wrote for the rest of the year, or at least until i was taken out of high school in may, and plunked in a downtown hospital, a skin-and-bones girl who’d whittled down to 85 or 90 pounds (i can’t remember the low point), in the vanguard of that scourge known as anorexia nervosa, a clinical coupling of words that grates at my soul (and my psyche) to this day.

some decades ago, perhaps at a high school reunion, one of my fellow underground rabble-rousers had recounted this incident to me, told me the story of how my papa had forbidden me from writing any longer for the Student Voice, as our anti-establishment rag was called. i remembered not a wisp of it, couldn’t imagine my laser-focused-ad-man of a father paying one bit of attention to my underground toils. i considered it apocryphal, a story someone had conjured up over the years when i became — thanks to my early and strange diagnosis — grist for the small-town rumor mill.

thus, word of this letter’s actual artifactual existence intrigued me completely. to say nothing of the fact that i have astonishingly few (read, almost none) letters or personal writings from my dad who wrote two monthly magazine columns for the ad biz. and the finding of even a page — let alone three — was a find of supreme proportion.

i ran to the mailbox day after day. when two weeks had passed, but no letter had arrived, i began to search for ms. feder. i found what appeared to be a phone number, called, left a message. she called back. she’d made a photocopy, she explained, then put the letter aside. she’d forgotten, but she promised to send.

the day it fell from the pile of mail, i took a deep breath and pulled the three still-stapled pages from the 44-year-old envelope, mailed originally from my papa’s downtown office.

right away, i heard his long-silenced voice, oozing up from the spaces between the typed alphabet letters. i heard his tender protectiveness. his measured level-headedness. in fact, he began by defending our faux-radical shenanigans: “While much of it is irreverent, iconoclastic and generally anti-Establishment, that really didn’t concern me,” he wrote. and then, when i got to the part about my promise to erase my name, i got teary. when i got to the part where he wrote that frankly he was embarrassed, i winced.

this is not the memory of my papa i’ve kept tucked closest to my heart. the scenes that have played, over and over and over, are the ones where i’m in the hospital — a psych ward is where they put me, if you must know, and if i’m completely honest — and it’s lunchtime, and my lunch tray has just been delivered, and the door to my room nudges open, and in walks my papa, face beaming, brooks brothers suit crisp as ever, even after his long walk down michigan avenue, from his high-rise office tower to my hospital. he is clutching a white paper bag, one he’s been handed in the women’s auxiliary cafe just off the hospital lobby, where every day they sold sandwiches and every day for that month he bought one. he sat beside me, pulled a straight metal chair right to the edge of my bed, sometimes taking my hand. he unwrapped from wax paper his choice of the day — chicken or tuna salad on white bread, almost always on white bread. he chewed while i tried to. he never missed a day. not once in the month — the terrible, awful, loneliest month — i was there.

but now i have another story to tell. the day my papa made me give up my name, and go deeper underground.

i cherish them both. my papa was paying attention, such close attention. and i was blessed to be in his sights.

was there someone in your life who paid close attention to you, closer perhaps than you realized at the time? and what was the difference it made?

p.s. perhaps the sweetest part of the letter was that i could show it to my beloved blair, who read it the night it arrived as he rode home on the el (i’d taken a picture of each page and sent along to my mom, my four brothers, and blair and will and teddy, wanting everyone to share in this closest encounter of the typed-and-stapled kind). blair’s texts came in two parts: “Loving the letter. Have read first two pages. So, so wise and precise…eager to see conclusion….” and next: “Wow! Loved it. What a good parent. 3 pages of controlled passion. He loved you so much, Fred. I’m thoroughly impressed.”