not your mother’s pot roast 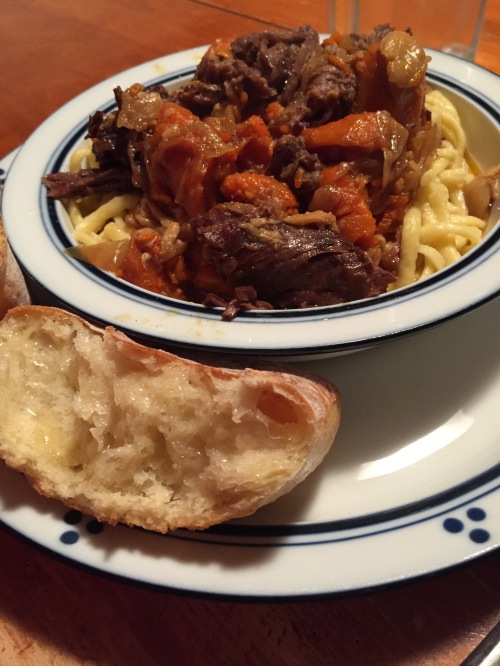 back when i was peeking into the kitchen, the room where my mother ruled, what happened to pot roast happened once every couple weeks. and, seeing as my papa was an ad man in the mad men days of american advertising, a three-piece-suited man who came home on the train with a brief case sometimes spilling with mystery boxes, boxes marked X, boxes we were meant to try, i came to count myself on the front line of the post-industrial-space-age kitchen revolution. which means i was among the first to suspiciously nibble hamburger helper, bundt cake in a box, and — our favorite — space food sticks, those tootsie-roll-like batons sheathed in crinkly silvery paper; “breakfast in a bite.”

is it any wonder my culinary quirks got cross-wired?

back to the pot roast. as best i recall, pot roast meant my mama was ripping open packets of dehydrated onion soup (thank you, NASA), spinning off the lids of cans, exercising her dumping skills. (i’d like to imagine that when no one was looking, she poured in a glop of old red wine, but that was likely the kitchen down the street, where my best friend’s mama was likely to pour a little red wine into, well, her first mug of coffee.) the whole pot-roast caboodle was entombed in aluminum foil, and set in the oven till the 6:30 train pulled into the station, my pa motored home, and we all sat down together to hear the highlights of the day downtown where the ad men re-wrote the national narrative, in 60-second pitches with the catchiest tunes.

another thing about the pot roast: i’m pretty sure we never called it pot roast. i think it had a name that ended in “steak.” when you were feeding five kids, and trying to stick to your weekly grocery budget (those were the days when my ma prided herself on a week’s worth of groceries for seven, paid for with $100 bill — and change to tuck back in her pocket, change that became her “funny money,” money to spend as she darn well pleased), you named whatever you could a name that ended in “steak.”

which is how i came to not really know what in the world a pot roast was. all i knew was that it sounded like something donna reed or dick van dyke’s laura petrie would make.

which is all an even longer-winded way to say i was mighty intrigued when i spied a food52 instructional guide for something called “pot roast with 40 cloves of garlic.” if you ever want to grab my attention, toss in any sort of big number. i’ve always liked playing with numbers, and 40 cloves of garlic had me, truth be told, at 10.

as i count down the dinner hours with my sweet senior in high school, i seem to have slid into an ulterior plan of feeding him in ways he’ll never forget. ways that might seep in as he stands in yet another cafeteria line with a dishwasher-splattered cracked plastic tray, awaiting a ladle of whatever swims in the hot metal bins. (it’s sneaky, i know, but we mothers must out-think our offspring, especially when they grow to be big enough that they don’t like to be smothered with our hugs and our kisses and the little red hearts we used to scribble onto their lunch bags.)

which is where we arrive, at last, and once again, at the pot roast. something about “pot roast” seemed to ping that place in my brain that’s on the prowl for unforgettables. a boy who sits down to dinner on a thursday night, or — back up the clock — a boy who walks into a house where 40 cloves of garlic have been infusing the kitchen, front hall, heck, making their way down the whole dang walk, all backed up with notes of grass-fed beef, and chunks of carrot, onion, and vegetable broth (with a splash of red wine, because i learned watching my best friend’s mama….), well that is a boy who might remember his mama — or at least her pot-roasty roast once in a while.

so i set out on my mission. secured me three pounds of grass-fed beast, peeled garlic till my fingers called for time-out, chopped and seared, and cranked up the oven.

because i never want to keep these little miracles to myself, i am herewith sharing my secrets. this comes from my friends at food52, those geniuses of community recipe gathering, where so many cooks have their fingers in the pot, you’re assured that whatever makes it onto the site is vetted up, down, and sideways. and usually delicious.

pot roast with 40 cloves of garlic

so there you go. have at it. i can gleefully report that for a minute there last night dinner was silent. silent in that way that the taste of what’s at the end of the fork is so unusually good, the taste buds take over and the vocal cords go mum.

and that’s the story of pot roast. and how i added one notch to the score board, the one marked, “reasons to come home from college. or at least miss my roast-searing mama.”

what’s your secret sure-fire hit to lure those you love back home to your kitchen?

14 Comments to “not your mother’s pot roast”