we will not be numb…

but i know that i woke up — 1,300 miles away from the nightmare — on the morning after, and the one after that, and couldn’t help but try to slip into the faintest, chillingest of outlines: imagined that in that first blur of an instant, when you haven’t yet pulled yourself out from the depths of nighttime’s disorientation, you might have the barest instance of not yet being shrouded, and then, before even a blink, you would be sucked down into it, into that raw remembering: oh my god, it happened. she’s gone. he’s gone. and you would realize that the nightmare you couldn’t imagine was the one that was yours now. and you couldn’t go back. you could not, for the life of you, not ever again, go back to the moment in time where you weren’t racked, gutted beyond imagination, gasping for air.

or maybe you don’t even sleep. maybe, not even for an instant, do you slip out of consciousness into the anchor of sleep, of distance, that shore you can never again reach, the one where you aren’t skinned alive, the one where you breathe in and out without your chest hurting, the breathing’s so hard.

maybe you pray harder than you’ve ever prayed — to trade places, so you’d be the one who’s dead, and the someone you love is the one who goes on.

maybe you can never ever pray another prayer. maybe the line goes dead. and you spend the rest of your life a hollow shell.

it’s all mostly impossible to imagine beyond the faintest of outlines. empathy can only carry us so far.

but i’ve found the most bizarre glimmer of hope here. it rises up out of the horrors of scenes caught on kids’ phones. i’ve watched video clips in the last day that i will never ever forget. if you’re brave, if you’re willing, here’s one, a montage from the new york times. it’s not the rawest one i’ve seen, but it’s awful beyond words.

so where’s the glimmer? the glimmer is in the documentation, it’s in this nightmare playing out in real time in front of kids who are digital natives, who instinctively pick up their phones and record, so for the first time, maybe, for a very long stretch of minutes, we — the faraway witnesses — we are drawn into the classrooms, we are watching the hands that are quaking in fear, we are hearing the whimpers, the wails. the children are witness, and thus so are we.

it’s a wholly different thing to be immersed in the minutes of blood bath in a high school classroom, to see the ragdoll-limp legs of a teen, and to see the red ring around her spread bigger and bigger. it’s impossible watching practically. it’s wholly different than watching the noiseless scenes from a helicopter looking down from above; even the frames of kids marching out of the school, hands up, stumbling in fear, those are sanitized, stripped of layers of horror, compared to the scenes that played out in real time inside the classrooms, the closets, the hallways.

they are the ones who insist that we listen. 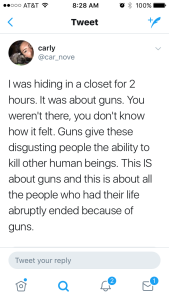 maybe this will be the time that breaks the cycle of national amnesia. maybe this time we can all make a promise: we will not be numb. we will not forget the hell to which too many have entered.

maybe the voices of kids who prayed for their lives, maybe they won’t be quelled. maybe we’ll listen. and, lest we start to go numb, we can play back the scenes they caught on their phones, and not let those deaths be in vain.

may the memory of those 17 souls ever be a blessing. and the 26 in sandy hook. and the 49 at the pulse night club. and the 26 in the church in sutherland springs…..