those words, spoken above the din of a crowded downtown aerie, with the city lights twinkling outside, with the clatter of forks against plates, stopped me. startled me. gave me a deep gulp of hope, the deepest in a very long time.

the man who spoke those words knows a thing or two about hearts — not least because he’s an intensive care doctor. not least because he works in hospitals in aleppo, in bomb-rubbled syria. in aleppo where bombs rain down in triplicate, a tactic intended to kill the rescuers as certainly as those in the midst of being pulled from the ruin.

just minutes before, the man who spoke those words — a gentle man with deep brown eyes that bore deeply into me as we spoke, inches away from a table spilling with pigs-in-a-blanket and shrimp and asparagus in long green shafts — had been telling stories to the crowd about being in an underground hospital in aleppo last summer — before it was too dangerous, before death was too certain to stay. he’d been telling stories of a mother of four, who’d been hit by a barrel bomb (a makeshift bomb filled with shrapnel, and chlorine gas), a mother who’d lost her unborn child and two of the three (ages 9, 7 and 5) who’d been huddled beside her.

i listened, rapt, as he told the stories, as he pulled the memories in real-time from inside the vault of tragedies now locked in his mind.

i’d listened a few minutes earlier as another syrian, a therapist who’d come to this country eight years ago, talked about the first months when a family is here in america. how everything — from the alphabet, to bus tickets — is practically indecipherable. how each morning, you awake in something of a daze, in that instant before you remember you’re far far from home. lost in a foreign landscape.

and, here’s the part i remember most, she said that the smallest kindness, the invitation to dinner, the gentle word at the checkout counter, the guiding hand at the bus stop, is never to be forgotten. you will never forget the face of the someone who was kind to you — never, ever.

i wasn’t taking notes; i was listening, so i can’t remember exactly how many syrian families are now living in chicago, forced here by war and unthinkable horrors. i want to say it’s 140. i do know the number is slowing to a trickle, and soon stopping (because of the so-called muslim ban that effectively puts up the “not welcome here” sign). i do know that each of those families, some clustered on chicago’s north side, some in suburbs to the west, have lived through hell, and traveled through hell to get here.

the syrian families who’ve been here longer, since the 1960s and 1970s some of them, when an earlier wave of mostly doctors and engineers packed up their families and moved here, they’re leading the network, the syrian community network.

they’re asking for the simplest list of supplies: rice in 10-pound bags; chickpeas in 28-ounce cans; sugar in four-pound sacks; flour, five pounds; oil in 48-ounce bottles; tomato sauce in cans of 28 ounces; and tea bags, too (no size or amount specified). they’re asking that the foodstuffs be dropped at one of two pantries — saturday, tuesday, and thursday, in glendale heights; saturday, monday and wednesday, on devon avenue on chicago’s north side.**

and they made the nifty card up above, with a whole menu of ways to help: from donating a CTA bus pass, to hosting a dinner. there’s word that someone is organizing an effort — 100 dinners in 100 days — to emphatically urge hospitality, to gather good souls, strangers soon to be friends, at the dinner table. to spend the day cooking, and serving up platters of very fine food. food to fill the belly, but more so the heart.

i’m awaiting word on the dinners. i want my house filled with the sounds of conversation, starting out slow and in delicate tones, and then rising, rising across the arc of a night, into the combustive discourse of joy. of gentleness. of one hand reaching for a water pitcher, or a platter of coriander-spiced lentils, bumping into another. and in that instant of hand bumping up against hand, i want eyes to look up, to look shyly, and then melt in the confidence of newfound friendship.

those are the miracles that unfold at the platter-filled table. those are the joys of a jumble of chairs squeezed round the plank of a dining table. it’s the arc from uncertain handshake at the start of the night, to hug that won’t let go as the guests finally walk out under the starlit dome.

those are the words the doctor spoke to me. those are the words of which he was certain. and his certainty reminded me what i’ve always believed: one little heart, one undeterred heart, it can be more than plenty to begin to change the course of history.

one dollop of love at a time. it’s the only place to begin.

how might you use your heart today to begin to change the world?

sending much love to my friend A who organized the gathering of syrian friends at her sky-high abode, and who opened the door to infinite hospitality.

** if you’re interested in dropping off groceries at the food pantry, leave a comment below, and i can email you the precise address.

and in case you’re inclined to help make a home for a syrian family, here’s the list of what’s needed. 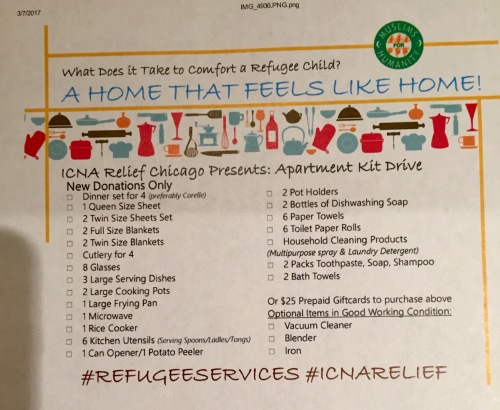 18 Comments to ““anyone with a heart can change the world.””