for the children: an inaugural prayer and a promise

my heart is heavy today, and when it’s at its most leaden i try mightily to lift it through prayer.

my prayer at the dawn of this day is for the children.

i think in particular of a deep-eyed girl of seven who lives in faraway maine, a little girl who holed herself in her chandelier-lit bedroom on monday, listening all day to the speeches of martin luther king, jr., a little girl who asks questions about how to use her voice — to speak out when she hears a girl teasing her friend on the playground, to speak up for what she believes, without fear that she’ll wind up unloved and pushed aside in the process.

she’s a little girl who is finding her way through the tangled landscape of fairness and justice, who is looking to the grownups around her to find the tools she’ll make her own, the tools that just might allow her to leave this world a little bit more whole — and more healed — than when she arrived.

“she’s struggling with this fear of not being loved if we use our voice and it’s not the same as everyone else’s, if all the voices don’t ring the same,” says her mama, a very wise soul with a very wise voice. “she understands that we can’t give someone else our voice, and we can’t borrow the voice of someone else. so, for her, martin luther king day was all about the power of using our voice for what we believe in, about the conflict of speaking up or keeping quiet even when you know something is wrong.”

my prayer is for that little girl. my prayer is for all the children, the ones waking up, perhaps, on a wobbly cot, under a thin blanket, squeezed tight against the mama who protects them from unthinkable things in the night. i am thinking, too, of the children who wake up not far from me, in bedrooms where walls are covered in papers and paints that cost more per square foot or per gallon than some of us could ever fathom.

i pray for them all.

because children don’t get a say in where they are born, and in whose arms they find themselves cradled. they don’t choose who soothes them; they ask only to be soothed, and fed, and kept warm and kept dry. they beg to be loved.

if they’re blessed, they’re anointed with all of those things. if there are eyes to gaze back at them, a voice to whisper — or sing — to them, if there are arms to scoop them up when they cry, well, then they’ve already won the baby lottery.

children are pure at birth, and not yet thick-skinned. they’re nearly translucent, in matters of heart and soul anyway. their job early on is to pay close attention, the attention of saints and prophets. they’re keeping watch in hopes of figuring out just who it is they want to be, and how they might best find their own circuitous way through the wilds.

i pray for them this newborn morning because i want theirs to be a world where goodness and kindness and gentleness seep in, seep to their core, bathe them through and through in truth and justice and love in purest tincture.

i want the grownups around them, and even the ones far away, to commit, day after day, to trying to show them these few fine things: tenderness, honesty, strength of courage, and moral resolve. i want them enveloped in the very strands at the core of every sacred text ever inscribed. 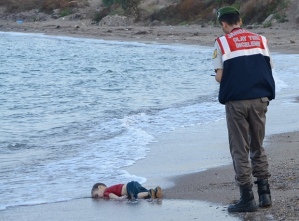 Aylan Kurdi, 3, a Syrian refugee who drowned fleeing his war-torn homeland, and washed ashore in Turkey. Photo by Nilufer Demir

i want children to be able to tune into the world beyond their front door and not hear vitriol, not see ugliness. i want them to listen to sharp and curious minds engaged in debate and dialogue, free from jagged edge, free from acid-tinged tone. i pray to God they don’t some day aimlessly change the channel and stumble on images of war-pummeled children, images of children covered in dust and rubble and blood from their wounds; children dumped — or washed ashore — lifeless.

i want them to hear the booming voice of hope, of words that lift the human spirit and set it soaring. i want them to feel wrapped in a message that tingles their spine, because even a child — especially a child — knows beautiful when she or he hears it.

i want each child to know full well that he or she can dream wildly, can be the very someone they choose and work to be. i don’t want them to know the sound of a door slamming in their face, or the screech of a siren carrying them — or someone they dearly love — far, far away. i don’t want a single child to be scared to death, to be breathless with fear. i don’t want hands and arms ripped away from them. i don’t want a child left alone in a classroom or closet or train car, left cowering in a corner.

i want for these children the america that i believe in — one that looks much like the world as God first imagined it: skin in a thousand shades of brown and black and cream. i want a melting pot where everyone gets a fair and solid chance. i want books — gloriously written tomes — to be as close as the nearest library. i want teachers to fill classrooms where learning is rich and intellects are lit on fire. i want leaders with backbone, with the courage to stand up and say, “that’s not right, that’s a lie, that’s unfair, or unjust, or just plain hateful.”

i want a sky that’s uncluttered with smog and poisonous fumes. i want a child to be able to poke his or her head out the window at night and count the stars, connect the dots of heaven’s light, name the constellations. i want the rivers and streams to gurgle and babble and rush and roar. i want children to know the sound of a leaf crunching underfoot, or even a wee little creature scampering by — close enough, perhaps, to muster a fright, an innocent fright, the fright of the woods.

i want children to sit down to a table where there’s food from the earth, wholesome food, unsullied food. food to make the child whole, and strong, and able.

i want children to be strong of body and sinew and bone, yet i know that can’t always be. and for those who are not — not strong, and not able, for children who are sick, or born with terrible burdens, i want them to be able to find a doctor or nurse or healthcare worker who can get to the bottom of the mystery, the quandary, the illness, and work toward a cure. or at least erase the suffering, as much as is humanly possible. i’ll beg God to step in to take care of all the rest, and to ease the worries too — of mama and papa and child, and anyone else who lies awake fretting every dreaded what-if.

i want them to know: when i’ve run out of answers, when i cannot quell the trembles, or chase away the darkness, there is a God who’s always in reach.

i want their prayers to be answered, and mine to be heard.

and i promise, with all my heart on this day, to do all i can to make certain the world i imagine, the world that i want, is the one i work hard to come true. i’ll do my part. starting right now. as the sun rises, again.

18 Comments to “for the children: an inaugural prayer and a promise”