the eloquence of silence 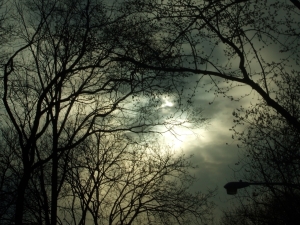 the sky is gray. as it should be. as my mama long ago told me it would be. had to be. this was the day that jesus hung on the cross. this was the day they call good friday, though i never have, never will, understand that. it’s a friday i nestle into, to be sure. it’s a friday when i will carve out a hollow of silence. i will wrap myself in silence and gray, gray sky.

it’s my practice, because we don’t usually shake off the ways of our earliest days, to contemplate deep and hard these hours when the one who healed the sick, threw out the tax collectors, the one who preached “love your neighbor as yourself,” the one who wept in the garden of gethsemane, he was stripped, and crowned with thorns. he carried the cross of his own dying along the dusty road to golgotha. he fell down. three times. and then, when he came to the place where he was to die, his arms and legs were nailed to limbs of tree, to wooden timbers, and he slowly breathed his last. and before he dropped his head, he called out: “father, forgive them, for they know not what they’re doing.”

and if no other story of the christian narrative compels you, this might be one to contemplate deep and hard all life long.

i never get to the bottom of it. but every year, come this gray, gray friday, i try. i sink deep into what might have been coursing through a holy man on his way to die. i contemplate how it might be to live a life of trying to right the ways of a world that’s side-stepped what matters, that’s lost sight of how to love, of what it means to make peace with enemies, to embrace the cast-aside, the forgotten, the scorned. and then, at the end of that short life, to be condemned to die. to carry the weight of that cross knowing it’s the instrument of your own death.

and all of that i contemplate in silence. it’s one rule from long ago that i try mightily to abide by. my mama made us all be silent. not a word from noon to three, the hours when jesus hung on that cross, the hour when he died. long ago, for all those gray gray fridays, i tiptoed to my bedroom, my one sanctuary in a house of brothers. i sat on my bed, stared out the window at the sky. turned the pages of some evocative telling of those final hours. and waited for the sky to darken, maybe rumble, maybe cleave, at the stroke of three, the hour when jesus died.

and so it is here and now, the silence that will infuse the afternoon, when i will retreat to my room, stare out the window, turn the page of some evocative retelling of this gray gray friday. though i don’t, and haven’t, set that rule in my house, have not made my boys abide (though i do offer it as suggestion, nearly every year). i follow all alone the rule of silence.

there is such eloquence in silence, particularly amid this noisy, cacophonous world. there is wisdom in allowing thoughts to flow, to follow their course deep down to where the inklings come. or the knowing. it’s as if the rivulets of thawing spring find their way to rushing creek, where the bubbling up begins.

it’s rare and it’s a gift, this setting aside an afternoon for silence. for holy thought. for deepening.

and this gray gray friday, there is much to contemplate. to breathe deep and fill my soul.

the wonder of this particular good friday is that as i pull away from the afternoon’s silence, i will turn to passover’s story of exodus. and there i will be gathered at a table and that story will be told and retold. two compelling narratives in one day at our house. so it is, the blessing of being both. last night, at the mass of the last supper, i listened as one reading told the escape-from-egypt story, and the next told how jesus sat down to the seder, the passover feast, the one that we’ll sit down to tonight and tomorrow night. the intermingling of narratives, the points of intersection, they’re not missed by me. and it’s all part, i think, of what makes the good friday story even more compelling. the contemplation of the depths from which it flowed.

this morning i thought i was going to burrow deep on the subject of silence, but, as so often happens, the sentences took me elsewhere. took me this time into jesus and the hours of this deepening afternoon. i don’t often write overtly about the tenets of my religion, or tell its stories here, but indeed they resonate and deeply draw my attention.

minutes after writing the words above, i sat down with my most beloved haggadah (the book that holds the story of the exodus, and outlines the prescriptions for the seder, the passover retelling and feasting); it’s the new american haggadah, edited by jonathan safran foer, published in 2012, and it’s brilliant. i read these words:

“we are not merely telling a story here. we are being called to a radical act of empathy.”

oh, i wish i’d read those words before i started writing this morning. they grabbed me by the throat, and hold me in their grasp. we are being called to a radical act of empathy. jewish or christian, the stories of this holy blessed weekend are calling us to radical acts of empathy. and therein lies the miracle. that we have the capacity to enter.

contemplate the radical act of empathy in how, in our lives, we are called to feel from inside those beyond ourselves.

and my original first question of the morning:

do you, amid your busy days, ever declare interludes of silence, to follow the rivulets of thawing spring to the rushing creek where bubbling comes?

21 Comments to “the eloquence of silence”