tracks to my heart 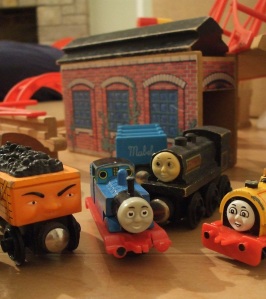 the email slipped in with no more than the ubiquitous ping. it came from my faraway brother, the one with a boy of his own now, a fine little lad rounding the bend toward two.

the email couldn’t have been clearer:

“Hey Babs, we are thinking of getting a train set for milo. I recall you guys had a great Thomas Train set up. If you still have it, would you be open to our borrowing it for couple years?  We would pay all packing and shipping both ways. Saves us buying new.  I totally understand you might not want to let it go. Just wondering.”

in an instant, the snapshots came tumbling: my own firstborn’s second birthday, a summer’s day so hot and sticky he wore just a onesie as we tiptoed down the stairs to see what the birthday fairy had tucked in the living room corner. my heart nearly burst as i handed him the very first box i’d ever gone out and bought for him. it was a box so heavy the little guy couldn’t lift it. he needed his papa and me. inside: an oval of track, wooden track; one ivy-wrapped train station; and a little blue engine named thomas, thomas the tank engine, a train who’d ascend to a starring role in the celluloid loops of one boyhood.

for years and years, the consummate posture in our house was a boy perched in a crouch, his fine little fingers curled over the spine of a train as he moved it this way and that, spinning tale after tale, spewing noise after guttural noise (for that’s what trains do when they speed or they crash). one by one, we collected engines and track and bridges and tunnels. we collected stories, and friendships there on the floor where the tracks morphed from circle to oval to intricate geometries that looped and ducked and rose and forked. back in the day, the little TV by the kitchen table played over and over the tales of the trains of the island of sodor, all told in the lilting tongue of one ringo starr, who to these children was simply mr. conductor, while to his parents he was the rockstar drummer, now curiously cast as trainman. (ringo gave way to george carlin — or maybe it went the other way, carlin to starr — either way, a bizarre bit of telegenics, one that endears both gents forever.)

our sweet boy loved trains more than anything. for years, we rode them cross country, falling asleep to the sway of the bunks as we rolled through the heartland, the hudson river valley, or the rise of the rockies. we drove to where we could watch the lumbering locomotives, switching back and forth on the side tracks in the yard where they were hosed down and polished. we climbed aboard on sundays and rode up and down the “el” line, or around “the loop,” chicago’s train set for grownups.

more than once, our little trainman plopped his head to the pillow and drifted to dreamland clutching one of his engines. he rarely left home without his striped engineer’s cap. and when he was four, and we drove to a farm to fetch a striped six-week-old kitten, our little trainman inserted “choo-choo” as the mewling’s middle name.

one christmas, the very same brother who now wonders if we might send our train set his way stayed up the whole night, sawing and pounding vast planes and chunks of wood, a train table with sawdust-sprinkled landscape, one that stood on four stout legs, and rose to the precise height of one little boy’s waist, for maximum stretch of his train-steering arms. that blessed brother’s all-night labor made for a christmas awakening never to be exceeded.

and then one day, the train table was collecting dust. the trains hadn’t moved one inch in the yard. they were tumbled all in a pile. and, in time, tossed in a bin and tucked at the back of the toy shelf.

for years now, they’ve cowered in the dark. too treasured to be relegated to the attic. too forgotten to see the light of the murky playroom downstairs.

but still that bin holds so many sparks of a boyhood, i can nearly hear its whispers. maybe more than anyone in the house, i’m the one still clutching the tracks and the sweet-faced engines.

but around here we believe in hand-me-downs. and not only because it stretches a dollar. because a hand-me-down is history. is layers of story. of love. is animated even its stillness.

and so, this morning, i will sift through the train bin. i will pluck out thomas, the blue one, and james, who is red. edward, i recall, is the kind engine (and thus, always, my favorite). and toby is a troublemaker. how could you not love the cast of your firstborn’s childhood? how could you not treasure the trains that, often, came to dinner? made lumps in the bed clothes? filled little-boy pockets? spouted faucets of tears if left behind, ever?

that little train man is far from home now, 1000 miles away from the train table that is no longer. he’s all grown, and he told me just last week, with a thrill in his voice, that the window of his senior-year dorm room looks out on a train track that runs through the woods of his leafy new england college.

and just a bit farther north and east, in the little town of south portland, maine, there is a little boy who doesn’t yet go to sleep dreaming of trains. but he will. oh, he will.

as soon as i slap the shipping tape onto the cardboard box that waits in the basement. soon as the nice mailman scoops up the parcel and plops it onto a faraway stoop. soon as sweet milo crouches down in that way that boys do, and curls his fingers just so, round the spine of the train. and, full steam ahead, chugs through a childhood.

bless the tracks and the trains, and the boys who so love them….

what are the treasures from your childhood? or the childhood of someone you love? do you recall bequeathing that treasure to the next keeper of treasure?

17 Comments to “tracks to my heart”