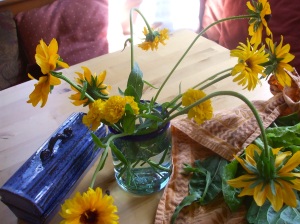 dispatch from cambridge (in which the chair up and flaps its wings, plopping down in the land of ZIP code 02139)…

fists full, i climbed the back stairs up to the third-floor aerie where all week i’ve been playing house, and while everyone else was out, was away, i added a signature note to the canvas that is our new dwelling.

i knew i was home, really home, when i stuck those thirsty stems into a cobalt-rimmed water glass, plunked the whole lot onto the pine table in the breakfast nook (where blue jays and sparrows come to the feeders there in the windows), stood back  and soaked it all in.

thus has this week unfolded, this first week, this long exhausting week of stuffing the poor old cat into the carrier, watching the taxi pull up to the curb, giving my mama a kiss as she and a gaggle of neighbors (at least one in a house coat) stood at the sidewalk of the house i love, and bowed on bended knee as we pulled away — the little one, the fat scaredy cat, and me.

the trip through airport security was smooth as i might have hoped, save for the news that they were pulling me and the cat (loose in my arms) aside for a paw swipe (mine, not his) to make sure no scant trace of explosive dust was anywhere upon me.

all this as i watched my laptop tumble down the TSA conveyor belt as the suddenly-left-alone 11-year-old tried to grab for the laptop, his backpack, my backpack, the empty cat carrier and whatever else was due to crash to the ground soon as the belt did its dumping. (like i said, this was about as smooth a stumble through security as i might have hoped for….)

then came the plane.

all was swell enough till the part where the plane comes out of the sky, and typically, as we all learned long ago, the descent is an expected — and necessary — part of any flight plan.

up till then, our fat old cat had more or less snoozed in his chic black bag, the one squished under the seat in front of me, the one that made the lady at the end of our row, the lady with the hearts-and-flowers tattoo peeking out from her undies, roll her eyes, while muttering impure thoughts, each and every one of those unkindnesses darted straight at our sorry trinity.

but then, not long after the pilot announced it was seatbelt time and we were headed down, that old cat let out a howl that, long as i’ve known him, means he needs an airbag and he needs it quick.

for the next half hour, my past life as a little-kid nurse came rushing back to me.

the 11-year-old beside me kept shrieking that something was wrong with the cat, the cat was going to pass out, “he can’t breathe, he can’t breathe,” were the words precisely. and i, pretending to be an ocean of calm, prayed mightily, and prepared myself for cat CPR.

to spare you the gory details, i’ll cut to the quick: no CPR ever was needed, but by the time we landed, let’s just say i was covered in decoration i’d not worn when i boarded the plane.

once we’d rustled up our bags (which oddly had come in on another flight, making for a few heart-stopping moments as we all imagined our life’s belongings swirled down some airport drain), we hopped into the little black car and let our driver (that would be the fellow who snared this faraway fellowship in the first place) steer us home.

wisely, he’d picked a route that zipped us right past fenway park at 55 mph, a sight that the kid in the backseat, a kid who considers wrigley field a holy mecca, couldn’t help but up and notice.

then came the exit sign: “cambridge,” was all it said, with an arrow pointing up and to the right. but the deep-down knowledge that that’s where home now was, and this was indeed a road marker in the story of our life, well, it made my heart thump just a little bit harder.

the architecture critic with his hands more or less on the wheel made like he always does whenever he drives: he’s pointing here, there and every which way except for the road, pointing at some built treasure whose whole story we all need to know. (it’s why i feared for my life when, back in chicago, they were building that god-awful soldier field, and he’d be so busy glaring and cussing as we sped past, i was certain the end of our story would come in a fiery crash with the headline: “architecture critic & whole entire family smashed to smithereens on lake shore drive in a final fury of fast-lane drive-by criticism.”

but back to the story of how we made it to home, here on franklin street, and what happened next: i’ll spare you details again, but let’s just say i walked into a lovely place, a perfect place, a place whose windows hadn’t been opened in weeks. it was hot. and, lest you forget, i had in my arms a queazy cat who’d barely escaped in-flight CPR.

i did what any newly-arrived immigrant might do: i dashed into the bathroom, and slammed the door. i had a trembling cat on my hands, a cat who wasted no time slithering beneath the footed tub and cowering in a corner.

i cleaned us all off, and dove into what i’ve come to recognize as my default mode — i made like a 9-year-old version of my little girl self and, just as back in the days when a whole glorious summer could be spent rearranging logs into tables and chairs and whole rooms in the woods, or turning a shoebox into a cozy cottage, i started to play house.

for the next three days i unpacked, i puttered. i pulled blue cobalt bowls from the shelves, and tucked them around the kitchen counters. i made a list or two or three of things we need from the nearest home-supply store. i dusted up cat hair. i talked myself through the first load of laundry in a cobalt-blue front-load washer that looks like it could double as the mars rover (i had visions of “i love lucy” soapy disaster, fearing i’d hit the wrong knob, just as lucy and ethel did back in the black-and-white days, and rivers of suds would cascade into the apartment just below ours).

i’m rather a firm believer in the notion that if we’re all going to spread our wings — and that’s why we’re here in the first place — we need one solid nest from which to fly each morning, and to which we return as the night sky fills with stars.

and so, my job no. 1 here on franklin street, was to turn this place into a home that feels like it’s ours. i’d tucked plenty of tokens from our faraway house into boxes and the back of the car (despite a chorus of eye rolls and protestations).

i knew, because i believe in these things, that the little guy just might need his vuvuzela, that long-necked noisemaker that punctuates soccer games around the globe. i knew his favorite fleece blanket might come in handy, draped at the end of his brand-new bunk bed. and i knew that a pantry filled with birthday peanut butter, and his old jar of honey, just might start the day with a not-to-be-underestimated sense of the familiar.

and so it’s gone here in our first week in cambridge. first things first, i know deep down. take the time to make it home. and who knows just how far and high those flights from the nest will carry you.

unfortunately, the other thing i seem to have packed in my suitcase was a nasty on-again-off-again fever, so some of my sticking close to home has been due to the achy bones that often accompany said elevated temps. i did make it out to harvard yard, and was blown away by the history and stateliness. truth is, i felt my knees wobble just a little as i passed through the brick-and-iron gate, kept wondering when a whistle would blow, when they’d check my passport and send me packing, saying i didn’t really belong. but i’m told by dear friends who did lug their college texts under these leafy arbors, that that’s not so uncommon a feeling here, it’s just that plenty of folks won’t let on to such wobbles.

so began week one. and tell me this: do you too find you must feather your nest before the real work of the heart can begin?