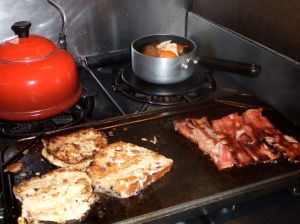 i wish you could hear the sounds here. yes, yes, the bacon is sizzling, and so’s the french toast. but the sound that truly makes my heart sing is the sound of sweet tedd in rapturous love with his uncle.

michael, you see, is one of the four. four uncles, each so beloved. there’s uncle airplane, uncle piano, uncle computer and uncle everything. and now all four are spread all over the country; maine, california, the mountains of north arizona, and, soon, toledo.

when an uncle comes home, there is reason for joy.

michael happens to be emphatically so.

michael is the brother just younger than me; we came every odd year, the first four of our brood. then, years later, an even one, mind you, came the caboose, came the sweet angel bri.

ever since we were little, michael and i have been particularly close. we used to lay on the extra twin bed in each other’s room, and talk the bedtime away. in the way back of the wood-paneled ford station wagon, we swapped stories and secrets, looked out the window, spun tales of all that we saw.

two christmases ago, michael was nursing his wife through her final excruciating days. she died before january ended, leaving my kid brother, at 45, broken-hearted and widowed.

last christmas, to change things, he came to see us the day after christmas, once his church job was finished, the songs put away.

after spending hours of each day on the phone all that long year, nursing him through his unbearable grief, finally having him here in the kitchen was the embrace i’d been waiting for, aching for, each time we hung up.

you see, michael is brilliantly funny, brilliantly quick. and brilliantly shining with love. to know him is, i’m not kidding, to utterly love him, and love him we do. he has been sunshine as long as i’ve known him, and i’ve known him as long as he’s been. one minute he’s playing the charlie brown theme song, the next he’s juggling oranges. he makes a game of dunking chips into salsa. and tedd, at his side, laughs and laughs ’til it hurts.

so this morning, once again, beats christmas in my book. it’s breakfast for michael, and michael for breakfast. if cooking for someone you love is a giant embrace, then the feast i just made was a boa constrictor.

it’s one thing to love someone on a long-distance phone call. it’s a whole other thing to fry up the bacon, slice the cranberry-studded, almond-paste-swirled holiday bread. heck, we poured cream in the mix of the eggs and the milk, the dunking sweet soup that turns bread to french toast.

the coffee was spiked with dashes of cinnamon. the pomegranate seeded and sprinkled on clementines.

and then we all sat, we held hands and we prayed.

it gets no more delicious than michael for breakfast.