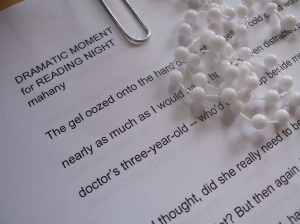 dispatch from 02139 (in which we all circle round, and fellows and co-vivantes engage in a nieman rite of spring, one that prompts us to pull from our pockets one choice passage — scribed this year, and picked just for tonight — that, one-by-one, we will read to the gathered masses. it is a nieman literary tradition, and it has one of us shaking in her reading clogs….thus the rosary beads above…)

long ago, in the leafy shade of my writing room back home, i remember sitting at my old pine table typing a promise to all the beloved “chairs.” i promised to bring you along on this year of thinking sumptuously, and i’ve tried mightily to do that.

sometimes, of course, these dispatches have been placeless, as they’ve captured musings i might have mused wherever i was in the world — a mama’s musings, a mama’s heartaches, moments not tied to any ZIP code. sometimes they’ve been particular to the curious case of going back to college when you’re pewter-haired.

i’ve carried you on a field trip to a poet’s farm in new hampshire, and let you peek in at the volumes piled high on my desk. i’ve tiptoed into the monastery, with you right on my shoulder, and i’ve brought you here to the kitchen when i got to stir a cauldron of chili for a boatful of hungry rowers.

this perfect april’s afternoon — with the just-warming breeze whooshing through the screen door, and the merry finches nibbling from the kitchen-window feeder — i am about to bring you along with me to a big moment on the nieman calendar: reading night.

the framework is this: each fellow and co-vivante (a.k.a. the tagalongs who traipse beside their duly-plucked fellows) is encouraged to sign up to step before the crowd and read one written work they’ve created during their time here in niemanland. twenty-one of the pool of 40 (that would be the 24 fellows plus this year’s 16 co-vivantes) have been slotted to read; i am one.

now, you might not know this about me but i turn to wobbles when called upon to stand up and read aloud. perhaps it dates back to some moment in, say, fourth grade, when i was daydreaming out the window, and sister leonora mary called on me to read, but i had no clue where we were, so the giggles around me rose to a roar, and there erupted a flurry of pointing fingers as deskmates right and left tried to foist me back on track — before sister leonora mary’s rubber-tipped stick thwopped me on the knuckles.

and, while i adore my fellow fellows and each and every co-vivante, this is no crowd for shrinking violets. we’ve got editors from the new york times, a pulitzer winner or two, the founder of the daily beast, a writer from the international herald tribune who regales us with her tales of traipsing in and out of tents of taliban poobahs, where she scores globe-gripping stories. and on and on and, oh my goodness, on.

this exercise in verbal undressing — that’s sure as heck how it’ll feel to me, one of a mere three co-vivantes who’ve signed up to read along — commences at seven bells, just as the sun sets in the western massachusetts sky, and that glorious full moon rises to spill its milky glow on all the cobbled lanes.

the piece i’m reading is one i wrote for a class that might have changed my writing life, the longform narrative writing class, in which i discovered once and for all just how darned hard it is to cobble one majestic sentence, let alone one 10,000-word deeply-reported tale.

this particular assignment was one in which we had to narrate a dramatic moment in our life, and exercise the sublime art of dialing back the descriptives so the power of the moment pulsed through, unweighted by a chain of over-wrought modifiers. it’s all about the verb, we learned and learned again.

“verbs give energy, if we use them with energy.”

you’ll see when you read my humble exercise (just below), why it might feel a bit like i’m standing naked before my writerly fellows.

but, in the spirit of clearing my lumpy throat and trying to shake off the shakes, i offer you the trial run of the hastily-titled, “fading.” (it had no title; heck, it was just assignment #9, but the nieman curator insisted i title it, and the first word that popped in my head was “fading,” so fading it is….)

(the beauty of unspooling it here is you can’t see my wobbly knees, and my fingers aren’t yet ratcheted up into their hummingbird tremble)

The gel oozed onto the hard dome of my belly in cold coiled worms. I flinched but not nearly as much as I would have, had I not been distracted by the three-year-old — my doctor’s three-year-old — who’d climbed up beside me to get a better look.

Really, I thought, did she really need to be clambering around like this was some sort of a hospital tot lot? But then again, I reminded myself, it was a Sunday afternoon, and my doctor, already on call, had told me, just 45 minutes before, “Meet me in Labor and Delivery. Let’s see what’s going on in there.”

Click, someone flicked off the lights. The screen blinked, fuzzy at first, like a black-and-white TV, back in the ‘60s, when the thunderbolts in shades of gray squiggled across the screen before settling into, say, the opening credits of “Twilight Zone,” and my dad whispered, “Shh!”

No one whispered a thing in the murky underworld of the ultrasound room. The screen turned white and nobody — not the doctor, not my husband, not the three-year-old — moved. Least of all, me.

I blinked once, twice, then again. Hoping each time that if I squeezed my lids hard enough maybe the black whorl in the middle would come into focus. The black whorl with the fingers like seaweed, swishing open and closed.

This time, there was no song. There was no seaweed. Just an empty black hole. And the white, all around, didn’t move.

My husband, the father of that baby, withered onto me, his curls mopping my cheeks.

And then — maybe to make sure I’d been scraped of all hope, maybe because to a doctor it was just a curious thing — my doctor pointed to the blurred edge of the baby’s outline, at the crown of the head, down at the toes, where the white wasn’t so crisp anymore. Where the white was pocked with gray.

“See right there,” she said, pointing, “Baby died a few days ago. It’s starting to fade.”

That’s why, for the last couple mornings, the coffee didn’t make me wretch quite so much. That’s why, since Tuesday, I’d been holding my breath every time I walked in the bathroom, afraid to pull down my pants, for the streaks, then the splotches, of blood.

I’d been through this before. But never so late in the game. We were past the first trimester. I’d circled the date — September 22 — on the calendar. Drawn a red heart, actually.

But now I just lay there. Absorbing. Staring at the white part that glowed. I memorized the curve of the head, noticed the nose, how much it looked like the baby’s big brother. I tried not to look at the part of my baby that was already fading.

They sent me home, told me to wait. The baby didn’t wait long. Alone in the night, wailing some primal howl, I cupped my hands and caught my rosy-pink stringbean of a baby, that’s how tiny she was, to save her from swirling into the bowl of the toilet.

(this is a not-so-common thursday eve posting, as i’ll be trekking to frederick law olmsted’s stomping ground tomorrow early morn, when i tagalong yet again, this time on a field trip with sweet blair’s “history of landscape architecture” class.)

and, yes, we are all re-catching our breath after the horrors of last week. spring unfolds here in slow time, thanks to chill winds that hover near, and keep the blooms unfurled in suspended animation.

lastly, the rosary beads up above will be in my pocket whilst i read. a sure cure for the shakes, i’ve found over the years.

do you get wobbly when you do certain acts in public? if so, what brings on the wobblies, and what, pray tell, are your tried-and-true cures???