the trouble with sleep 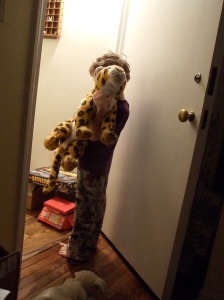 if we were in the tv listings, it’s not clear whether we’d be pegged as tragedy or comedy. let’s call it the tragi-comedy that wouldn’t quit.

it started, as many prime time episodes often do, innocently enough. the antagonist (that would be me) duly bathed, and read and prayed with sir protagonist (that’s him up above, but that’s getting way ahead of the script).

there was the usual kiss on the head, the “sleep tight,” as sheets were pulled and tucked one last time, the “see you in the morning,” tossed over the shoulder as mama antagonist sauntered out of the room, hit the hall light and thought she’d have, oh, maybe an hour to herself.

she had barely rounded the kitchen corner, barely wrapped her hands on the popcorn she’d be popping, when the first plaintive wail came wending down the stairs.

something about a back rub.

antagonist, being mean, shot back a simple: “go to sleep.”

teetering between tenderness and needing to cork the noise, mean mama softens–nay, relents–and ascends for what at best might be termed a 15-second swish of palm to little back.

just enough time for little mastermind to toss his next attempt at barring sleep. this time something about being lonely. needing cheetah. mama rolls her eyes. in the dark, he must have missed that.

she retreats to office. he, apparently, set off to nighttime jungle, where, big hunter he, he procured the big cat of his desires. which is what you see above. the trophy moment, caught on film. marlin perkins couldn’t be more proud.

if memory serves me right (these nighttime dramas make me foggy-headed, they twist and go so long), there were these added bumps in the weary road to sleep: the cheetah, it seems, was not enough. soon all the friends were needed. which, then, precipitated the problem of needing sleeping room for entire mattress menagerie.

at quarter ’til eleven–egad, if i believed in caps, those last three words would have been big and raised–his animals apparently lined neatly in a row, stretched from one end of the bed to the other, young sir protagonist tiptoed in the dark to where i sat typing. he sidled up quite softly, whispered in my ear, so sweet he took my breath away: “i have a little problem. i have a pillow for all my friends, but now there’s no pillow for me.” dropping his whisper even lower, he offered his solution: “i’ll grab a little couch pillow.”

as he wandered out for pillow fetching, he turned to ask me this: “what does cardinal start with? what does st. louis cardinals start with?” the boy is learning letters, and apparently at that late hour, all barricades are lifted, and thoughts just flow like cars cruising late-night streets.

yes, yes, at last, the house was quiet. (but not before two music boxes crashed onto the ground at an hour i won’t disclose, promptly–i assure you–propelling me off my chair and up the stairs to see what the bleep was the matter. what in heaven’s name? was he cranking lullabyes for pillow-hogging critters? alas, i did not ask. i had firm tucking to attend to.)

yes, yes, with that crescendo, our little drama ends. the late night rambler, cat in arms, finally quelled his rambling soles deep beneath the covers.

i never did get mad. it was all too charming, a charm perhaps only a mother could love.

i can hear you shrieking. i might hear you dialing dcfs, the folks in illinois who protect little ones, god bless them deeply.

but before the sirens blare, before they cart me off, might we pause and ponder just why the dark abyss of sleep feels so deep and bottomless to a child who clings to light in any form? why some nights is the settling to bed so agitated an exercise that all are worn and wounded before it winds to its hushed-at-last conclusion?

in my house, both boys come by disdain for sleep, well, rather honestly. naturally, in fact. i would be one who, if she could, would round the clock with nary but a nap. i love early morning. i love late night. that leaves little room for dozing in the middle.

the trouble with sleep, as i see it, is you get so little done. i find every hour has its charms. deep down, i think, i hate to miss a minute of this blessed thing called life.

and so, my little children just might think the same. no wonder i was charmed by the litany of pleas that kept the cheetah hunter prowling deep into the dark of night.

and thank heaven for kindergarten in the afternoon. while he sleeps off his prowl, i get the morning to myself.

pssst….it’s not always so drawn out. this particular protracted bedtime was truly made for tv. sometimes these episodes simply shout to be recorded. and you can always change the channel. though, of course, i hope you’ll stay tuned. in fact, i know there are other bedtime dramas out there. any takers in the fine art of telling bedtime tales?

4 Comments to “the trouble with sleep”