making room for the hallowed 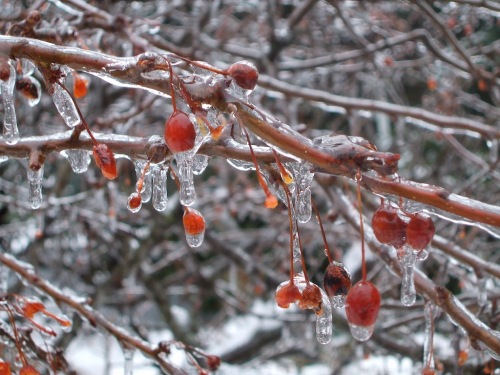 i know, because the calendar says so, that christmas is coming, christmas is truly upon us. christmas in my heart of hearts is that one whispered pause when i feel the whole world — the stars in the heavens, the murmur from the woods, even the hustle in the marketplace — swell up with the pulse of new birth. i imagine the whole world on its knees, holding its breath, bowed down to welcome the babe birthed in a tangle of straw in the dinge of a barn where sheep and cows and a goat, maybe even a brood of clucking hens, keep up their animal chorus. that’s the christmas i reach for, the one i make room for. the one where the quiet is soaked through with holy, the one where one flickering wick shatters the darkness of night.

only, up till this minute it’s been anything but calm and bright around here.

one kid is home with the freshman-year “crud,” a concoction of germs that has him wheezing and coughing and looking up symptoms of mono on the internet. he’s been writing papers all week, so we’ve mostly been making like we’re one big study hall, with lights on till the wee, wee hours, and fridges raided at two or three in the morning. the other kid is barreling toward his last law school exam of the semester, but he took a detour in an emergency room, and scared the living daylights out of me. (he’s fine; i’m the one still shaking off the “rattles.”) and then, because why not, i decided to have a double-dose (that’s back-to-back, as in two wretched days in a row) doctorly peek at the insides (aka not one but two colonoscopies) last week, and after night no. 2, when they made me drink four liters of drain-o, i thought i might die on the cold bathroom floor. meanwhile the so-called man of the house is trying to save a great american newspaper.

all of which is to say: we need a little christmas. and hanukkah too.

so, today it begins, today i begin to make room for the hallowed to come. i’m off to the butcher in a wee little bit to rustle up my six pounds of hanukkah beast. i’ll crank the oven and fill this old house with the incense that cannot be beat: clove and bayleaf and peppercorn, a splash of red wine, a jar or three of chili sauce, then hours and hours in a 325 oven. next up (soon as the soon-to-be lawyer steps off the plane midday tomorrow), it’s off to the tree yard, where we’ll stroll and peruse and put our critical architectural eye to good use; chances are we’ll snag the same old fraser fir we always seem to snag (one too fat and too tall, and more or less to everyone’s liking).

and then, soon, will come one of the holiest moments of the whole long year: i will be alone in my kitchen on christmas morn, and except for the hiss of the simmering spices on the stove and the old schoolhouse clock incessantly counting the minutes and hours, it will be so quiet i’ll hear the rustle of wings and the squawk of the jay out the window. it’ll be inky dark outside, the first crack of light infusing the eastern sky. a star or three might still be twinkling. and here comes the best part: i’ll know that one flight up the stairs and around the bed, two beds will be filled with the boys who will forever be my heart’s reasons for being.

i’ll remember that it all boils down to the simplest of blessings: as we rub the sleep from our eyes, see first thing the bed-wrinkled faces of the ones we so love, as we block out the noise of the world, inhale the long years of loving that brought us to this holy moment, all else will melt away. we will be wrapped in the true miracle of christmas, the love that’s guided us all along the way. the love learned well by paying attention. the love that began, once upon the ages ago, when a wee blessed babe let out a cry for all the earth, and the whole world listened.

i’ll remember: for christmas to come, i need to make room. need to clear out the noise, wrap my sweet soul in those few fine things that are everything: a love that won’t die, a light that can’t be extinguished, and a belief in the undying hope that peace might be just around the next bend, somehow always in reach.

and here’s a christmas-y gift for all of you, a poem from mary karr’s descending theology, that draws me deeply into that holiest first night:

She bore no more than other women bore,
but in her belly’s globe that desert night the earth’s
full burden swayed.
Maybe she held it in her clasped hands as expecting women often do
or monks in prayer. Maybe at the womb’s first clutch
she briefly felt that star shine

as a blade point, but uttered no curses.
Then in the stable she writhed and heard
beasts stomp in their stalls,
their tails sweeping side to side
and between contractions, her skin flinched
with the thousand animal itches that plague
a standing beast’s sleep.

But in the muted womb-world with its glutinous liquid,
the child knew nothing
of its own fire. (No one ever does, though our names
are said to be writ down before
we come to be.) He came out a sticky grub, flailing
the load of his own limbs

and was bound in cloth, his cheek brushed
with fingertip touch
so his lolling head lurched, and the sloppy mouth
found that first fullness — her milk
spilled along his throat, while his pure being
flooded her. (Each

feeds the other.) Then he was
left in the grain bin. Some animal muzzle
against his swaddling perhaps breathed him warm
till sleep came pouring that first draught
of death, the one he’d wake from
(as we all do) screaming. 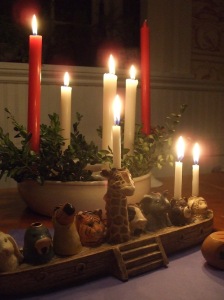 merry blessed Christmas, and happy hanukkah too. may your brisket be mouth-watering and your Christmas dawn be filled with overwhelming peace. xoxox