the cartography of discovery, one page at a time 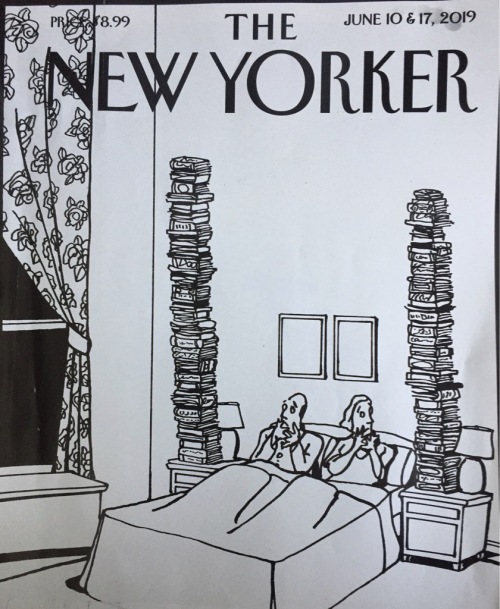 i am finding my way, or trying anyway, one page at a time.

the stacks of books are growing at a precipitous, and possibly murderous, rate. it’s not quite as death-defying as the bibliophiles who cowered on the cover of middle june’s new yorker, the brilliant bruce eric kaplan’s “bedtime stories,” which made me laugh out loud (in sorry self-recognition). but it’s growing at a rate that might make ol’ jack and his beanstalk shudder.

certainly propelled by the question of the season — what will you do with your one wild and precious life? — i climb the stairs of this old house, this increasingly arthritic house (the old wood slabs and my old bones now creaking in something akin to unison). i am, more often than not, carrying a small armload of books. i carry them, logs to the pyre, to see what i might kindle from the depths of their pages. 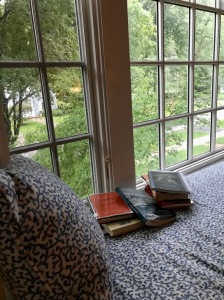 my destination is the nook by the window that’s become my signature perch. my aerie. the crow’s nest for those not tossing on the seas, but merely tossing in the undulations of her own uncharted life.

i am, i suppose, reading my way toward some more certain path. and, more often than not, i find myself inside poetry. i find poems the surest way toward clarity. it’s the way a poem illuminates the barest wisps of the everyday, the quotidian. imbues those moments with the volumes of understanding, or wisdom, i’ve always sensed. poetry puts dimension, puts shadow, light, and a spectrum of color, to the otherwise unnoticed.

and therein i find what i call sacred. the holiness of the every blessed moment. if only we stop to mine the depths, the strata, the igneous rock bed beneath the flimsy shale.

this week, as i squirm inside the borderless plateau that is my newfound station, as i arch this way and that, wondering where my path is hiding, i stumbled onto this most perfect poem, one that almost seemed to be a polaroid of the moment in which i find myself: the work of my lifetime, mothering, now coming to a turn.

but what i love the most about this poem, “things you didn’t put on your résumé,” by the brilliant minnesota poet laureate, joyce sutphen, is that it holds the everyday up to the light. shines incandescence on the otherwise invisible. she says it more pulsingly and achingly than i’ve ever managed to capture it (though i wrote three books trying…..)

so from my corner nook in my window seat, looking out into the linden boughs and the serviceberry where the sparrows romp, here’s the perfect poem for this moment when i am looking back at all that’s been, missing it terribly, and wondering where oh where will i next find the closest thing to holiness in my everyday? 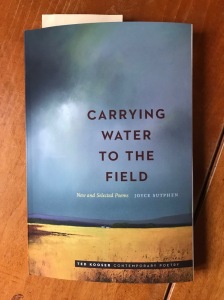 Things You Didn’t Put on Your Résumé
by Joyce Sutphen

How often you got up in the middle of the night
when one of your children had a bad dream,

and sometimes you woke because you thought
you heard a cry but they were all sleeping,

so you stood in the moonlight just listening
to their breathing, and you didn’t mention

the toothbrush ten times on each tooth while
you sang the words to songs from Annie, and

Violin Method and that you can do the voices
of Pooh and Piglet especially well, though

up your way of reading it from Glynnis Johns,
and it is, now that you think of it, rather impressive

before they went to bed and on the way out to
Yellowstone, which is another thing you don’t put

on the résumé: how you took them to the ocean
and the mountains and brought them safely home.

“Things You Didn’t Put on Your Résumé” from Carrying Water to the Field: New and Selected Poems by Joyce Sutphen, University of Nebraska Press.

simply: what are the things you don’t put on your résumé?

9 Comments to “the cartography of discovery, one page at a time”