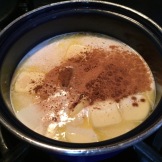 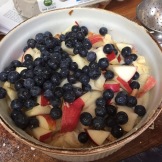 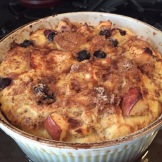 i was watching butter melt into a bath of milk and sugar and cinnamon when it dawned on me: there is something about this summer that there’s never been before. and it’s not just that the kid i love so much is leaving in less than 60 days, though that’s the thing that’s somehow at the root of it all.

watching butter pool across milk, apparently, is a stirring prompt for early-morning philosophizing, for checking one’s soul, and seizing a revelation or two. what i realized, as i whipped up blueberry bread pudding on a wednesday, no less, whipped it up simply because the kid i love loves bread pudding, loves it best in summer when the season’s rotund little berries the color of night are tossed in with abandon, is that somehow this summer’s defining watch word is easy, as in stripped of all the junk — my junk — that usually gets in the way.

easy as in not worrying. not worrying about the clock, or deadlines, or whether he’s home at the stroke of midnight or half an hour later. easy as in surrendering to the whims of the day, plopping onto the couch, finding his hand at the end of my fingers, wrapping mine around his, and then simply sitting there for enough innings to figure out who’s playing who, and who might be ahead, all the while weaving in the sorts of questions and curiosities that come in the lulls of lazy baseball.

i am, for this one short sweet summer, devoting my days and my nights to simply, softly, loving my kid. savoring every single thing about him. i am relishing as if there’s no tomorrow, because in some ways there isn’t. there really isn’t. except for the way tomorrow affords us the joy — the possibility — of trying all over again. each day another chance to love in the ways we hope and dream and know we can love.

makes me think i sure wish i’d known to be this sort of mother at the other end of this equation, when i was just starting out, a quarter-century-plus ago. i remember how, back in the daze of a newborn living, breathing, squalling, hungry-like-clockwork baby, i armed myself with charts — breastfeeding charts and safety pins moved from bra strap to bra strap, my highly-evolved method for tracking which breast for how long, at what intervals — seeking solace in sharp-angled grids and penciled-in numbers. i steeled myself against the uncertainties and vicissitudes of toddlerhood by worrying about whether we were five minutes late to dump ourselves into the station wagon for the short drive to nursery school — as if someone at the schoolhouse door was doling out demerits — for the mothers who failed to make it on time. the soundtrack of my life was worry upon worry upon worry. no wonder firstborns wind up so crazily cross-wired.

i wish, some time before this very last summer of my very last kid (i know there are only two, and the way i phrase it it sounds like there’ve been a good half dozen), in these countdown weeks before he hauls off to college, i wish i’d realized how lovely it is to be, well, carefree. or as close as i’ll ever come, anyway. (someone once told me i was calm like a swan and after thinking, oh, honey, you sure don’t know me, i shot back, “yea, smooth on the surface, but paddling like heck underneath.”)

truth is, the credit for this newfound way of lazy-being goes to the kid himself. he’s intent on one thing this summer: savoring each and every hour of each and every day. savoring it even when he’s flipping burgers and shaking the baskets of fries for long hours at the short-order grill where he picks up a paycheck. savoring the nights with his toes buried in sand, the moon overhead, and the blankets around him filled with his gaggle of friends. savoring the long drives and deep conversations, the kinds best unspooled from behind the wheel, when two or three pile into the old sedan and clock miles up and down the leafy winding road that hugs the shoreline here in chicago. plopping himself on the bench where i sit at the kitchen table, stretching out his long-and-getting-longer legs, and idly clicking his phone while shooting me the occasional question. his mantra: gotta make the most of this. gotta love this summer.

and so i take my cues from the master. delighted to be tutored in the fine points of taking it slow. in savoring. in tossing aside the occasional heart-jabbing worry.

i am finding the succulence of summer. the succulence of mothering at its juiciest essence. i am letting the soft breeze blow across my bare toes. tossing out the to-do lists and time clocks. and making bread pudding on any old wednesday.

i am learning to summer — to mother — on the very last page of the chapter that ends just before one of us shoves off to college. if only i’d known all along.

how did you learn to savor — be it a season, or simply an hour? or is it something you’re still trying to learn? who have been your most unforgettable teachers, and what are the lessons they’ve taught?

p.s. because i didn’t want it to get lost in the shuffle, i posted yesterday (a rare thursday post) my latest chicago tribune review of a book for the soul, in this case, the glorious christine valters paintner’s dreaming of stones: poems, a glorious volume of which i wrote (in part): “Paintner is fluent in the lush language of earth and sky as well as the otherworldly, the mysterious beyond. Born and raised in New York City, she is old-soul Celtic, through and through. Her poems rise out of the monastic practice of dwelling in silence, and hers, often, is a churchless god. A god who can’t — and won’t — be confined. A god who belongs to any and all.”