when roots are called for, the big red pot comes through

i’m in-between and somewhat out-of-sorts. i’m not certain we could riffle through a diagnostic manual and find it written just that way, the malady. and maybe it’s not a malady, just simply stating fact. maybe it’s merely the lull in human undulation, the dip between the rises.

and, truth is, it’s not so bad — the in-between part, anyway. the in-between part is liberation, defined. a long line of assignments is behind me, and i’m in the fertile ground where new ideas begin to rumble in the distance. for months now, i’ve been applying fingers to keyboard day after day after day. so this week, without so much as a whistle being blown, i seem to have declared it deep-breathing time. i found myself roaming anywhere except the keyboard. i found myself clipping shriveled vines in the garden, plucking last-gasp bouquets and tucking them — one last time — in the old milk pitchers that duly serve to hold their pirouettes. i found myself reaching for the big red pot. and all the roots — the parsnip, carrot, turnip — that are ours with one swift tug on their leafy tops.

i seemed to be swirling in whole body immersions. in tactile acts that drew me close to earth, and thus infused with heaven’s fumes.

i needed rootedness this week. and my big red pot came through. it’s there, thick-walled and heavy enough to shatter toes. to yank it from the cupboard is no small feat, one that usually calls for rearrangement of the entire teetering tower of lids and bottoms. but once planted atop my old crotchety cookstove — the one whose burners must take turns deciding who will burn today, and who will sit it out — the rearrangement is all worth it. that pot all but begs to put me back together. it sits wide-mouthed and waiting. all it asks is that i get to work: peel away the earth-stained skins of all those roots, chop them into chunks, toss with abandon. all whirled in olive-oil glisten. all softened, surrendered, through minutes on the flame.

i made a root stew this week because i needed roots. i simmered it all day, with a pinch of this, a cup of that. it was alchemy, all right. the sort that heals me every time. i set out to root the ones i love, the ones whose week wearies them. but all day long it was me who inhaled the essence of autumn, of doors closed, and furnace rumbling once again. 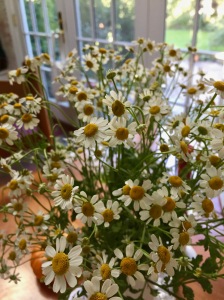 as long as i was ambling down the road to roots, i clipped a fat fistful of chamomile, the very essence of becalmed. i set the table, put out fork and knife and napkin. i awaited the return of those i love, the ones who’d shuffle down the walk long after dusk, and into night. there is something sacred about keeping watch for comings home.

there is something sacred about immersing yourself in the offerings of earth: in roots and fat fistfuls of bloom.

sometimes the shortest route to blessing is setting out to bless the ones we love. along the way, we find the sacred tapping us in our translucent parts, the ones where our heartbeat all but shows.

the susurrations of the sacred catch me every time.

and may they catch you, too. how do you carve your path to groundedness, what’s your certain route to simple daily blessing?

p.s. my out-of-sorts-ness is simply being ground down day after day by the national vitriol. it’s a toxic drip, and it’s rubbed me raw. it reminds me of being a kid keeping watch on the schoolyard bully, tempted to plant my hands firmly on my hipbones and let rip a mighty spew! (stay tuned….)

14 Comments to “when roots are called for, the big red pot comes through”