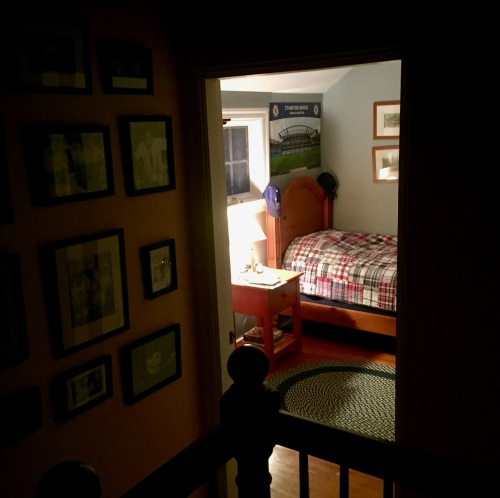 it didn’t take long to hit us. once the sun went down, and the stars turned on. once two, not three, places were set at the old kitchen table. once we climbed the stairs and rounded the corner, spied the empty room.

empty, as in the boy who sleeps there was gone for a few days. empty, as in he made the bed before he whirled off to the airport (a sure sign of something unusual astir).

i heard both of us groan, the deep-down guttural sound you make when something feels strange. as we stood side-by-side brushing our teeth, i saw the look on both of our faces in the bathroom mirror: haunted.

we were both glancing into the not-too-distant, just-around-the-bend, two years-and-four-months from now. when the kid, God willing, will be off in college. the sweet boy who every night bounds into our room, in the dark, no matter the hour, whenever he’s finally calling it quits before sleep, and, every blessed night, he plops a kiss on my head, throws his gangly arms around whatever part of my sheets and limbs he can find, there in the dark.

how in the world will we manage, without his sweet animations 24-7? what in the world do you do with a house that’s missing its most precious cargo?

we’ve been at this, the other grownup and i, at this experiment in parenting, for nearly 24 years. had one babe then another fully occupying every inch of this house and our hearts. and last night, for the very first time, we both felt the hollowness up around the bend.

i didn’t quite know when i married the man i love just how much this fathering would melt him, would deepen him, would make him take so seriously the care and instruction of fine men in the making. i should have known — the man i love had perhaps the dearest father known to humankind, a man whose attentions on his children were deep and pure and unfailing.

one of the first clues that the man i married might take on uncharted dimensions was the night, weeks shy of our first labor and delivery, when he rolled my direction and announced to anyone listening: you’re not going to recognize me; i’ll be turning to mush (or something very much along those lines. i was not taking notes in the dark).

and so it’s been. the man practically goes weak in the knees for his boys. and ever since the little one came along, eight years after the first, a good four years after we were told that no more babes would ever come tumbling from the heavens, well, he’s kept his eyes on that prize like nobody’s business.

sometimes, in the thick of growing kids, when every few minutes you’re running this way or that, worrying about fevers and flus, tryouts and tests, you almost forget that some day the chapter will close. those kids’ll up and move out. pack their bags, wave goodbye, and launch their own sweet lives.

it’s not that we’re clueless, and it’s not for lack of evidence — all around us, seeing as we’re on the, um, older end of the parenting scale, folks we know and love are singing the empty nest song. we’ve been told — by reliable sources — that these people we birthed will perhaps marry, have kids of their own, turn us into grandmama and grandpapa. and having sent one off to college, and soon off to law school, we’re somewhat versed in long-distance parenting.

it’s just that — oh, my — it hit us like 10 tons of bricks last night that we could soon be dwelling in a house that’s 10 sizes too big. a house that’ll feel like an old pair of jeans, slid down around our ankles, because they don’t fit anymore. we might need walkie-talkies to holler from one room to the next, since our intermediary messengers will no longer be here to relay the word (as in, “mom says there’s smoke coming out of the oven!”).

thank God we get these limited-edition previews, those signs from the heavens that life is about to change, and change rather dramatically. it sank in with a thud last night, and now that wisp of what’s-to-come might begin to lurch around deep down inside, where we do all our growing, our getting ready for the transformation that’s peeking over the horizon.

he’ll be home sunday night, that sweet kid now romping through cambridge, mass., 02138, his home away from home, the global village where he’s certain he left a chunk of his heart. by then, perhaps, i’ll gather a stash of brochures from the college just down the lane — the one that might break me in slowly to this notion of deep empty nesting.

in the story of your life how did you find a way to adjust to the day-to-day absence of someone you loved? or is it an ache that still hurts?

two housekeepings: i’d thought i might write a blessing today for that soon-to-be-birthed work of my heart, Motherprayer: Lessons in Loving, but instead i was walloped by that empty bedroom above — and felt the need to try to capture the moment in words. i’ll likely send out a special blessing on tuesday, the official publication date of the book with the lovely nest on the cover. and an update on bravery: i found out this week that mustering courage, doing the thing that wobbles your knees, sometimes makes your wildest dream come true. details to come in the very near future.

9 Comments to “the empty room: gulp.”