this is who we are

truth is, more days than not i feel like i’m climbing a hill with boots filled with concrete. but then, every rare once in a while, a whiff of hope swizzles by. don’t know about you, but i’m reaching out and grabbing as if my life — all of our lives — depends on it.

last night a friend i love — a friend with a tender heart and fierce magnificent defiance — sent along a link to the sign up above, “hate has no home here.” i’m planting those words — in all those languages and alphabets — squarely in my front yard.

that short declarative sentence captures everything. it gets to the gist of the matter — for me, anyway. it’s the bullying, the hateful tone, and the words and the rulings that pit one against another. that’s what’s draining me, scaring me, making me think i might have a stroke.

and, day after day, that’s the epicenter of most of it. i don’t want to live in a country where everyone’s eyeing everyone — are you one of us? we wonder. stopped at a stop sign, tapping our toes in the checkout line. it permeates each and every hour of the day. it’s seeped into the interstitia of all of our minutes. it’s why i stay away from the public square of the new millennia: facebook. i don’t want to marinate my days in the vitriol — from either side of the equation — because harsh words — from any side — serve only to wedge, to divide, to move us farther and farther from the peaceable place where we climb on each other’s shoulders and reach for the heavens.

i was blindsided by the gloating that came along with the win. i hadn’t imagined. i admit that i hadn’t imagined the win in the first place, and shortly after discovered that, for too many, the win gave license to let rip with whatever had been bottled inside. it all came gushing out. and that’s why — months later — i’m still struggling to find my footing.

there’s a house not far from mine where life-size effigies of the former president and first lady were perched on a bench beside the president elect. the former president was dressed in a shiny orange pimp suit. the former first lady, dressed as a whore. it took weeks and weeks for parts of it to finally be taken down (for far too many sickening days, the tableau included a black-faced effigy tied with a noose, dangling from a tree. and ugly yard signs, too). the house is stately, sits on a hill, on a main street that slices this town. i’d have to drive out of my way to avoid it, so i did. i still do. because i couldn’t stand the sight of it. it made me sick every time. i understand that theirs is the right to say whatever they choose; but i wish with all my heart they didn’t find it amusing — maybe delightful — to mock with such vengeance, to jeer, to broadcast what feels to me like plain old hate.

i’m raising my flag and fighting back in the only ways i know: quietly, without folderol and noise.

the other night, driving home through the dark, i was sitting in the back seat when i noticed a car stopped in what seemed like the heart of an intersection, about a block away. i saw the driver get out, and that’s when i noticed something lumpy and dark in front of the car, lying in the road. i didn’t wait for my brain to make sense; i opened the door and i ran. as i got there, i saw that the lump on the ground was a man, just starting to move. he was already bloodied, his face beginning to leak from his nose and his eyes and his forehead. as he strained to lift his head from the ground, the blood poured without pause. the man’s blood spattered me. i cradled him, tried to keep him still. i asked the man his name, praying he’d be able, and he told me. his name was howard. he lived nearby. he had no family, he said. he had no idea what had happened. and that’s when i looked up at the car stopped just inches away, the car whose windshield was shattered as if a boulder had fallen smack onto it.

with all my heart, i tried to keep howard conscious, to keep him from slipping into a place where we’d not get him back. by the time i was asking him to count backwards from 10, my firstborn had leapt too to his side. he helped hold howard still. we both prayed as fiercely as we’d ever prayed. it wasn’t long till a doctor, from out of the blue, ran over too. pulled out his phone, turned on the flashlight, and began to assess the crack that fissured howard’s head.

the one thing i knew most certainly as we all huddled there together, in the dark, in the cold, one man’s blood pouring and pouring: we were all there for each other. life and death is what lay before us, and we were all pulling for life. because we had to. because no matter what’s going on in the world around us, in the end, we are each other’s only hope. and the decency at the heart of every human still breathing is what we’re exercising here. i know that for those few extraordinarily long minutes, it felt to me like we were shouldering all the hope, all the goodness, this world has to muster. we were strangers suddenly entwined in saving one life. and we harbored him with prayer and with love. because isn’t that what all of us hope will be there for us — should there ever be a night that’s dark and cold, a night when our breath is labored, and we’re slipping away?

and in the end, that’s all i know. and it’s the one thing i will not surrender. i will muster every grain of defiance in my heart and my soul, and i will not let hate or hateful words win.

because who we are is all these tiny moments where love wins out, where we rise up out of our comfortable lives, take the reins of what feels right, and do what needs to be done: we march, we make phone calls, we live and breathe kindness as if it’s political protest. these times are begging us to be our best selves. and all around, i see people i love doing just that. they send me yard signs. they raise money for refugee families. they invite those families in for dinner. they listen to their stories. they find love, front and center. and that’s the way we win. that’s what God’s asking. i’m certain.

what are the moments of love that inspire and embolden you of late?

as for my friend howard, he is out of ICU, and i hope and pray he’ll be heading home soon. i’ve been keeping watch all week. because howard will forever be in my heart and my prayers.

as for the sign above, i’m having a few made today. here’s the link, if you too want to print out a poster, a yard sign, a button to pin to your coat (bless them, they’re free for downloading). the magnificent sign was designed right here in chicago by an artist named steven luce. i don’t know him, but i thank him with all of my heart. 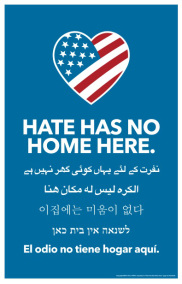