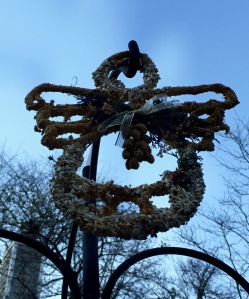 and so i found myself enchanted when i tumbled upon a legend i’d not heard before. it popped from the pages of strega nona’s gift, a storybook my faraway forever best friend mailed me this week.

as i learned while turning the pages, the month of december is one filled with feasts, all of which insist on stirrings in the kitchen. it begins with st. nick (dec. 6), flows to santa lucia (dec. 13), then it’s Christmas eve’s feast of the seven fishes (dec. 24), followed swiftly by the midnight feast of Christmas (dec. 25), and new year’s eve’s feast of san silvestro (dec. 31) when red underwear, for unknown reasons, is required (note to self: go shopping).

it seems those italians do not stop: they roll the feasting straight into january, which is where this story picks up. according to strega nona, my new guide to january feasting, the eve of epifiana — that’s epiphany, from the greek, “to appear” — once again finds everyone cooking. but this time it’s for the beasts and birds, the wee scamperers and the lumbering furry fellows. 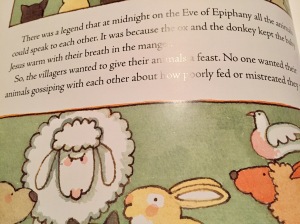 “there was a legend that at midnight on the eve of epiphany all the animals could speak to each other. it was because the ox and the donkey kept the baby Jesus warm with their breath in the manger.

“so the villagers wanted to give their animals a feast…”

and that’s all the prompt i needed. (although if you read along, you find the motivation is merely to squelch the chance of midnight gossip among the animals, lest they peg you as a stingy old cheapskate who feeds them not. which i’d say squeezes some of the charm out of the equation.)

for years now, my annual feast for the birds is a ritual of the longest night, the winter solstice. i make suet cakes, string cranberries, heap a mound of seed into the feeders. as darkness blankets the hours, i make certain my flocks are fed, and fed amply.

so now i’ve another excuse. and in honor of the ox and the donkey who bowed down, who warmed the newborn babe with their breath (as exquisite a furnace as i’ve ever imagined), i baked more cakes, melted more suet, stirred in plump raisins and nuts and seeds. i tossed with abandon last night, the eve of today’s epiphany. i filled the old bird bath that now serves as my trough. scattered cakes and crumbs near the french doors, so i could peek at the merriment come morning.

and sure enough. not long after dawn, as i wandered out to refill the terra cotta saucer that serves as my birds’ winter bath, there before me was one big fat mama raccoon, holding a cake in both of her nimble long-fingered fists.

she glanced up but didn’t flinch. she seemed not to mind that i was trespassing quite near to her breakfast. nor that i was offering a warm drink besides. (alas, she didn’t mutter a single word, nothing close to a thanks for the chow; so much for the midnight whispers. although she might insist i’d missed the chatter by a good six hours.)

and now i’ve a new excuse for spoiling my herds and my flocks (i like to think of them in masses, as it makes me feel like the shepherd i long to be). there is something deeply comforting in imagining that i’m the guardian of my critters, in hoping they can depend on me to keep their bellies full.

it’s a simple notion indeed. but it charms me to no end, and satisfies the tug to be God’s caretaker of all creatures, great and small and in between. in a world that sometimes leaves me gasping for breath, making a feast for my wild things is balm. especially on a morning when it’s 15 below. and the ‘coon at my door comes knocking.

what are the feasts that prompt you to stir in the kitchen? and is epiphany, the feast of the three kings, or wise fellows, among the ones that stir you?

sometimes it’s called little christmas, and for me it’s a quiet pause, the last inhale of merriment, before we return to so-called “ordinary time.” may your epiphany be filled with quiet and wonder, and a bright star in your night sky.

one last legend, in short form: the italians also celebrate epiphany with the story of befana, a soot-splattered old woman, sometimes called “the christmas witch.” in the version i love best, a few days before baby Jesus was born, the wise men stopped to ask befana for directions to the manger where Mary and Joseph and the newborn babe would be found. she hadn’t a clue, but offered the travelers a room for the night. come morning, the trio invited her to come along, to meet the Christ child. she declined, saying she had too much housework (therein lies the learning that one oughtn’t be waylaid by mopping; you never know what you’ll miss). once the kings had gone on their way, the old lady had a change of heart. covered in soot, cloaked in a deep-black shawl, carrying her broomstick, she set out in search for baby Jesus. to this day, the story goes, she’s still searching. and as she travels from house to house, on epiphany, she leaves behind fruits and sweets for the good children, and coal, onions, and garlic for the ones who are naughty.