books for the soul: just in time 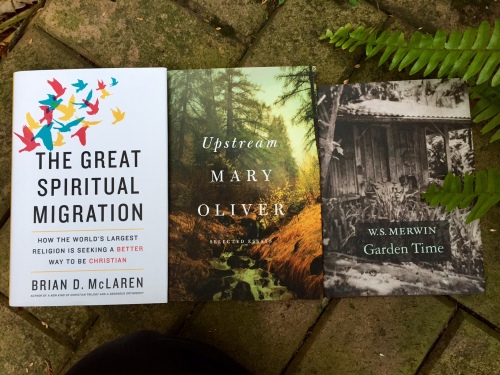 i often turn to poets and prophets when my heart feels like it’s leaking sadness, and so this latest roundup of books for the soul is an apt offering this fine november morning. i don’t always remember to post these here, though they’re always to be found at the chicago tribune, now tucked inside the arts & entertainment section on thursdays (soulful roundups, the ones i write, appear every five to six weeks). if you’d prefer to find this online, here’s your link. otherwise, read on below. God bless mary oliver, w.s. merwin, and brian mclaren for abundant wisdoms and poetry.

That Brian McLaren’s roots in conservative Christianity once ran deep, makes his a powerful voice calling for a prompt and wholesale realignment. It’s a religion gone astray, he argues, and it needs a serious fix.

His ultimate challenge, astutely laid out in “The Great Spiritual Migration: How the World’s Largest Religion Is Seeking a Better Way to Be Christian,” is this: Might Christianity find a way to become more Christian? (Read: More all-inclusive, and, most of all, more loving?)

McLaren, a former pastor, progressive activist and highly respected Christian thinker, minces no words in claiming that Christians by the droves are “fleeing the brand, as the brand is so compromised as to be unrecognizable.” He writes as only an insider can — with rock-solid authority. His thesis: “Our religions often stand for the very opposite of what their founders stood for.”

Whereas the founders of religions — and the denominations thereof — were defined by generosity, vision, creativity and boldness in action and thought, the religions that “ostensibly carry on their work,” McLaren writes, often become “constricted, change-averse, nostalgic, fearful, obsessed with boundary maintenance, turf battles, and money. Instead of greeting the world with open arms … their successors stand guard with clenched fists.”

McLaren’s argument demands attention; it comes in a time of religious tumult. American society, and the West in general, is rapidly becoming more secular, with the “nones” — the religiously nonaffiliated, including atheists and those who claim to be spiritual but don’t identify with a particular religion — accounting for almost 1 in 4 Americans today.

Pointedly, McLaren asks: “What would it mean for Christians to rediscover their faith not as a problematic system of beliefs but as a just and generous way of life, rooted in contemplation and expressed in compassion?”

When reading Mary Oliver in any form — poetry or prose — you oughtn’t be surprised when suddenly you find yourself at a full stop. When you come across a sentence so arresting in its beauty — its construction, its word choice, its truths — you can’t help but pause, hit “reread,” and await the transformative soaking-in, the awakening of mind and soul that’s sure to settle deeply.

So it is with “Upstream: Selected Essays,” Oliver’s latest collection of writings (19 in all, 16 from previous collections), here twinning the threads of the natural world and her lifelong literary companions. Long considered the high priestess of astonishment, she lays before the reader epistle after epistle from her Book of Nature and the meditations therein.

For Oliver, the natural world — be it a consideration of the snapping turtle or the red-tailed hawk, the cattails swishing at the pond’s edge or “the black-bellied pond” itself — is the channel into the sacred.

Hers is not an explicit religiosity, but rather it’s writing weighted with suggestion, with a gentle nod toward the divine, and every once in a while an explicit salutation. Addressing a gargantuan gassy-breathed snapping turtle, for instance, she asks: “Did He who made the lily make you too?”

She never fails to stir us from whatever is the natural speck before our gaze to the immeasurable heaven’s dome above and beyond.

And as with all the best of Oliver, and her company of contemplatives, her message, her religion, is one that rests on this command: Open your eyes. Pay attention.

“Poets were my first priests, and poetry itself my first altar,” Mary Karr, the poet and memoirist, once wrote. And so, for those of us drawn to the liturgical practice of carving out quietude, and cracking open the pages of volumes of poetry, the latest collection from W.S. Merwin, two-time winner of the Pulitzer Prize in poetry, is prayer of a high order.

The son of a Presbyterian minister who started out writing hymns for his father, Merwin, now a practicing Zen Buddhist, takes on a study of time in this latest collection, “Garden Time,” 61 new poems written late in his life (he’s now in his ninth decade). Merwin’s verse pulses with a longing, a knowing that this moment is blessed — and is slipping away. There’s a reverence here that can only be called sacred, a divine infusion.

While he trains his eye on the natural world, it’s the infinite wisdom tucked within that world that Merwin is mining. His subjects of inquiry (to name but a few): sunset, shadow, silence, the sound of rain when it stops. Considered “an oracular poet” by some literary critics, these poems brim with unanswerable questions; Merwin’s examination of time and memory — looping, spiraling, slipping to and fro — can’t help but spur you to pause, to pay closer attention. To consider your own life’s measure of time, looping and slipping away.

Attention, Mary Oliver says, is the beginning of devotion. And devotion is the high art of the soul. That high art is rarely practiced more ethereally than through the words of William Stanley Merwin.

Barbara Mahany is a freelance writer whose next book, “Motherprayer,” will be published in the spring.
Copyright © 2016, Chicago Tribune

while you’re busy reading this, i hope to be typing away on another post for this friday morning, one in which my holy balm was found pushing my wheelbarrow.

6 Comments to “books for the soul: just in time”