a prayer for beginnings and endings 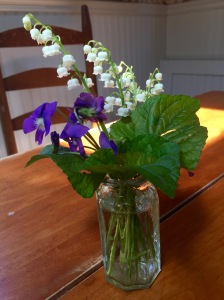 it’s whirling all around me, the beginnings and endings. mostly the endings.

on the leafy lane where i live, house after house has sprouted those signs they post around here, graduation signs. “congratulations 2016 grad!” the signs trumpet. and the kids who live in those houses, they were four, holding their mama’s hand, toddling down the puddled sidewalk, shyly peeking out from under a big yellow rain hat, the day i met the first of the flock. just yesterday, i thought. yet somehow, in the pancaking of time, they’ve learned to read and pedal bicycles, they’ve gripped hands to the wheel, stolen first kisses, broken bones and borne concussions. and now, they’re practicing “pomp and circumstance.” could it be 14 years later?

and in this old house, one will be awake any minute, gulping down one last hour of geometry infusion, taking two more finals today, leaving only one straggler exam for monday. and the big kid, the one who now refers to himself as, “a retired teacher, retired at almost 23,” he’s wrapped up his very last round of trying to teach kids to read. he and i sat side-by-side the other night, pored over the papers he’d hauled home, the ones with the questions he’d asked his kids to answer, in the very last class, before they piled paper plates with flamin’ hot cheetos, and cooled the flames with juice box upon juice box. turned out it was a lesson in all the questions that matter: what’s your favorite memory, what are you most proud of, what does it mean to live a good life, what kind of person do you want to be when you grow up?

the answers humbled both of us, the kid who’d wondered all year if he was teaching anything, and me, the mama who always knew he was. what most kids called their favorite memory was “when we were all on the floor, and the school got shot.” (or some variation on that school-shooting theme.) one kid was most proud that he’d “learned to read more better.” and then we got to the humdinger of a last question, the one that asked the kids to dip deep into their souls and pull out the rough draft of a dream.

in answer to the question what does it mean to live a good life, a seventh-grader (one well-versed in the echo of gunshot) wrote: “to be able to live life instead of not living at all.” a kid whose dad is in prison wrote: “i wants to be a wealthy person to provide for his family.” and a kid who’s scored a high-school scholarship and a national champion football ring wrote: “i want to live life with a dream.” a sixth-grader, though, might have said it most clearly: “it’ll be no killing.”

the kindergartener who tells anyone who asks that her daddy and her uncle fell down and died “when they tripped over their legs,” (they must not have told her guns were involved last summer and the summer before when the two were gunned down) she simply wrote: “i love you, mr. k.”

and so, school years are over, whole chapters have ended. careers (that short-lived teaching career) have come to a close. and job interviews lie ahead. so, too, do emails telling of roommates, and dorm assignments, and start dates for jobs. and lots and lots of soggy goodbyes.

so on this birth of a day when so much is ending, i’ll whisper these words, and offer them boldly up to the heavens…

first and always, thank you, dear God, for keeping them — all of them — safe. specifically, for each and every drive back and forth on streets where guns aren’t foreign, aren’t far away, where jersey barriers and plain-clothes cops (guns drawn) have been known to block the route. thank you for steering that bullet clear of anyone’s flesh the day it shattered the  schoolroom window, bounced off a pipe, and dropped to the hard tile floor of the preschool classroom. and thank you, while i’m at it, for inspiring my firstborn to ask those questions that might have given him a peek at the little bit of difference it made for him to stick it out till the end of the year, and not abandon the classroom. not even on the days when a second-grader pushed another clear down the stairs, or the pair of sixth-graders devised a science experiment, the one where they shoved their pinkie fingers straight into the electric socket to see what would happen. and not on the day the fourth-grader called him a name you wouldn’t want a kid to know. and not on the day when the fifth-grader punched him — hard — in the gut.

thank you for the hours when you gave them strength, all of them. the days when the soccer coach picked the other kid, the day when the test they’d hoped to ace came back not even close. the day when the job that somebody wanted was already filled.

thank you for the wisps of kindness that softened their days. thank you for the rare few times when i might have unearthed just the right thing to say. when i answered the phone, drove to the schoolhouse door without grumbling, and knew once in a while that the holiest sound i could make was the silence of listening, just listening.

thank you, too, for the joys. for the love birthed in somebody’s heart, and the delight of watching him tenderly bake her a batch of congratulations cookies. and ice them, to boot. each one inscribed with a word or a phrase that signaled their shared secret script.

thank you for the undeniable fact that they surround themselves with very fine friends. friends there in a pinch. friends whom the little one says, “make me a better person.” and friends who thought nothing of flying in for the weekend, halfway across the country, simply because it’s the place my other kid calls home (or at least this year he does).

thank you for the dinners that left the kitchen looking like a battalion rolled through. and thank you for the quiet dinners for four, especially the ones when no one minded the leftovers. thank you — yes, thank you — for the chance to pack two lunches again. and thank you, mightily, that the last one of the year has been packed. the pb & j, retired for the summer. or at least my spreading knife in it.

thank you for all of this, always. thank you for the blessing of pause. of paying attention to cusps, of beginnings and ends. thank you more than anything for this latest whirl around your radiant sun. i know i’m sated. i’m shining.

and what’s in your prayer for beginnings and endings?

and happy blessed graduation, birthday, end-of-final-exams, whatever is your beginning or ending of choice on this glorious day in may…..

a p.s. about the little bouquet up above: when i was little, the height of springtime pluckings was the gathering up of plain old violets, and heavenly send-me-to-the-moon lily-of-the-valley. in a bow to those bouquets of long ago, i plucked up a little fistful. if i’d not stumbled on a prayer, i might have mused on those. instead, i simply tucked them atop the prayer. a fitting may altar.

Filed Under: blessings, giving thanks, growing up too fast, transition
Tags: counting blessings : prayer of thanks : school year ends

8 Comments to “a prayer for beginnings and endings”