rx for the end-of-winter blues 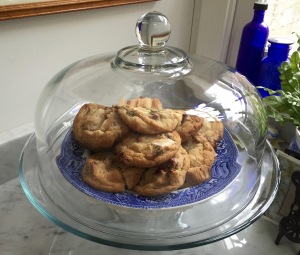 i’d not realized as i ambled through the grocery aisles that i was stumbling on a cure for the end-of-winter blues.

or at least a hearty inoculation against its jagged edge, the one that leaves you nearly flopped over, drained of all vims and vigors.

i filled my cart merrily, madly, picking up speed as i tossed in accoutrements i don’t normally pluck from shelves with such abandon. there were crunchy things in a thousand shapes. there were bottles to be quaffed. there were the makings of icing-slathered cinnamon rolls (those makings, truth be told, came in a tube that is merely slapped against the counter’s edge, disemboweled, tucked in a 9-inch-round, and baked till the morning kitchen fills with heaven-scent of butter, cinnamon, vanilla, the holy trinity of essential deliciousness. and who really minds if those smells emerge from cardboard tube; is not the point simply that somehow they emerge?).

a crew was descending on this old house, a crew of men six-feet-tall and taller, and they are hungry men, young men, twenty-somethings who flew in from three east-coast cities to poke around the middle of the country they’ve, until now, ignored.

they are the best pals of my recent college graduate. and they chose this snowy, cold march weekend to make a slumber party of our house. there were limbs strewn everywhere when i awoke this morning. and not long after, morning groans, the noises young men make when they are hoisting selves from sleep.

i’ve now fed them, quenched their thirsts, and sent them all southbound on the early-morning train. it’s quiet now, but in their wake i realize they’ve all shot me through with just the things i needed: noisy distraction. unbridled merriment. disruption of the old routine.

i once longed for a flock of kids to call my own, but i’ve realized over the years that The One Who Pulls Those Strings must know me better than i do, for truth be told i might collapse under the weight of more than two. so i get my fill in occasional blasts of multiples.

over the years: the gaggle of sleepy-eyed second graders who emerged from sleeping bags to squeeze around the kitchen table, hands flying, syrup spilling, as they pulled their portion from the flapjack stack i’d plopped before their hungry eyes. the nights the basement hit capacity, with every bean bag occupied, and i was tapped from slumber to be the designated driver for the winding roads to half a dozen homes. or the lunchtimes when the backdoor flung open and kid after hungry kid piled in, testing my capacities in the griddle-flinging challenge.

it heals me every time. i get lost in the reverie. of their secret codes. the jokes i only half hear. the kicks under the table i seem to never miss.

i love the mad swirl of company. i love a room where the rafters ring with human hum. i even love a kitchen that seems to have been overtaken by a team of poltergeists. and messy ones at that.

while i might more naturally be a girl who loves her whispered tete-a-tetes, knees huddled under cozy blankets, i can spring to full-throttle animation when the ones i love are surrounded, buoyed, pole-vaulted by the ones they call their nearest and dearest.

the next 60 hours in this old house will rise and fall with the ebb and flow of cacophonous company. i’ll breathe deep, inhale the whole of it. i know, too soon, it will be but a memory, a long tucked-away soundtrack from that one glorious weekend when this old house opened wide its rooms, and invited in a slew of dreams come true.

and in other news, dear beloved chairs, i must pass along this bit of blessing: i signed this week a contract, a long-awaited contract, for another book, one that comes from the deepest place in my heart. its title, for now anyway, is motherprayer: lessons in loving, and it’ll be out a year from now. it’s coming from the same publisher as slowing time, although i’ve a new editor for this one, and she is a dreamy dream if ever there was. more details as they emerge. having done this once, it might be even scarier the second time round, but i steady myself with the dear and deep souls who ring this table. it’s all been keeping me tap-tap-tapping away for months now, and it promises to keep me at it.

as the world beyond our tables feels more and more inhospitable, tell me who taught you the fine art of hospitality, and what’s your dream equation for great good company, and the ways you make each and every someone feel deeply much at home?

12 Comments to “rx for the end-of-winter blues”