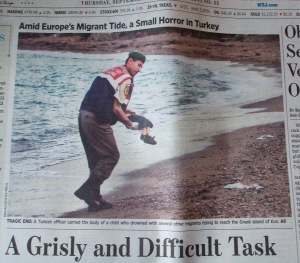 i don’t often bring world news to the table. not because i don’t pay attention to it each and every day. mostly because most of the time the holiest way i know how to live is to saturate the moment, the space before me, with all the heart and soul i can muster.

but there are moments and images that shatter. that land on my kitchen table with the plop of the morning’s newsprint. that stop me cold in my tracks. that propel me to drop to my knees, or tumble me out the door, where i stand beneath heaven’s dome, and i open my heart and my prayers, and i beg for an answer: what can i do? what can we do? how can we gather up this suffering, how can we put balm to the wounds of the world, how can we heal the broken children, broken dreams, broken hearts?

dear God, how can we make a drop of a difference?

so it was when i saw the photo of the turkish policeman lifting the little syrian boy who had drowned in a moonlit sea. drowned when a boat built for 10 had been loaded — overloaded — with 17, too many of them little children. not long after setting out across the aegean sea, escaping from the war-torn hell that is syria, hoping to make it to kos, the island off greece, the little boat capsized, and 12 children, aged nine months to 11 years old, were lost, drowned in the dark, dark waters.

i’d seen the photo the day before of the limp little boy, face pressed against the sand, bare little legs, sensible shoes buckled, still buckled, after he’d washed to shore.

and then the next morning’s news — on the front page of the wall street journal, a paper held in the hands of decision makers around the U.S., around much of the world — showed the next frame in the story: the turkish policeman lifting, cradling, the little boy. the legs limp, bent at the knee, a little hand folded across the little boy’s tummy.

dead and alone at the edge of the sea, chased away by a war that won’t stop.

little boy, being lifted too late.

and so we need to pay attention, all of us.

amid the first light of dawn, i offered a prayer for the little boy, and all of the others.

truth is, i don’t know what to do, and my prayers feel too hollow. not that they’re not prayed with fiercest urgency. but what i want is to airlift myself to the syrian shore, where throngs of terrified mothers and the children who cling to them are emptying their pockets and purses of whatever currency they can manage to scrounge, climbing into rickety boats, and setting sail under the light of the moon that glistens across the water, and falls, too, across my backyard, falls across my collapsed black-eyed susans and the anemone that nod through the night. (is there not some mystical unifying force — lunar pull — as the beams of the same gibbous moon shine down on all of us, syrian refugees adrift on the sea, and, halfway across the very same globe, our own ramshackle gardens?) i want to walk through the train station of budapest, where babies are cradled against mamas’ chests, tucked under arms, made to sleep on the hard station floor, or out in the city square, where one family — a syrian refugee father, his wife, and their baby — threw themselves across the train tracks in protest, and would not be moved. i want to reach out a hand, offer my home as a place to sleep and eat and be safe, find their bearings in this terrible world that’s chased them from their home, their life, the world as they knew it and loved it.

i’m certain i sound naive, my too-simple solution, my impulse for healing the wounds of the world. but how can we believe in the power of love, the gospel of love, and not believe in trying?

so what will we do, those of us captured by the image of the drowned little boy, haunted all day by the shrieks followed by silence?

there is a river of humanity — women and children and the men who love them — pushed from their homes; rickety boats succumb to roiling seas, and trains refuse to budge, won’t carry the war-torn to safety. the world is watching. we have promised and promised again: we won’t stand back and watch horrors unfold.

horrors are unfolding. voices are crying.

never again, we promised. so how are we keeping our promise?

the question is literal as much as rhetorical, what can we do? what wise response might we muster?

14 Comments to “never again, we promised”