99 psalms: prayer-poems that “refuse to leave us unattended” 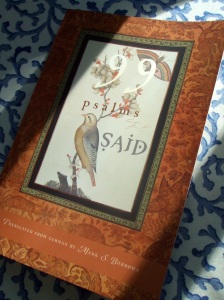 it was nearly 17 months ago, on a hot saturday’s afternoon, with little sleep the night before, that i climbed the stairs of a gray triple-decker (boston vernacular for what chicagoans call the “three-flat”), just down the lane and around the corner from harvard square. there i met a bearded gentle man, a man who presided over an aerie where birds came to the windows, where sunrise poured into the living room, and sunset washed the kitchen in a rose-tinted rinse. cabinets were stacked with pottery, cobalt rough-hewn plates, heavy to the hand; mugs whose handles met the flesh of your palm with solid tenderness. and books, books lined the walls, floor to ceiling, in half the rooms.

the bearded bespectacled man was mark burrows. he was, for 11 months, our landlord. and he will be, for life, my lighthouse keeper and my teacher.

mark (for in this moment i address him as a friend) is a professor of poetry and divinity, a scholar of mysticism, and a historian of medieval christianity. in that first walk-through of the two-bedroom-two-office apartment for rent, as i spied the titles on his desk, i knew i needed to live there. i needed to inhale the essential texts, and the poetry and prayer that breathed there.

almost a year ago, mark, who is now teaching theology and literature at the university of applied sciences in bochum, germany, published the luminous “prayers of a young poet” (paraclete press, 2013), a collection of 67 poems of rainer maria rilke, the great german poet. that book, the first english translation of rilke’s prayers in their original form, evoked for poet jane hirshfield, “leonardo da vinci’s notebooks — it shows the same mix of surety, roughness, genius, and the sense of a precipitous creative speed.”

rilke explores “the poetry of search,” or as burrows writes, “poetry that ponders darkness.”

just weeks ago, my teacher, professor burrows, published another translation of a poet whose work dares to explore the often unexplored landscape — the soul in exile. this time, burrows put his considerable intellect to the work of a poet i’d not ever known, one who goes by the pen name of SAID.

born in tehran, SAID emigrated to germany as an engineering student in 1965, but he abandoned those studies to pursue a writing career, and through the power of his poetry, has become a prominent figure in the german literary scene.

burrows first encountered SAID, he recalls, on a “dreary, rain-soaked night” in munich’s old city hall in may of 2010, at a poetry reading held in conjunction with the second ecumenical Kirchentag, a massive gathering sponsored by the roman catholic church and the protestant church of germany.

as SAID took to the microphone, burrows writes that he noticed the audience leaning forward, the better to absorb what flowed next.

“the psalms he chose…were blunt, vivid, and often startling in their language and imagery. none betrayed any trace of sentimentality…the fierce directness of their language conveyed a marked impatience with intolerance, probing the ambiguities of life with an unflinching honesty in order to remind us — if we had forgotten — that ‘purity isn’t the sister of truth.'”

burrows goes on to write that “these are psalms that cry out against the confidence of zealots, with their claims of righteous authority over others — crusaders, campaigners, and jihadists alike.”

in other words, the exile SAID writes poems of exile, “psalms arising from a ‘no-man’s-land.'” he employs a metaphor of wind as “a hope that reaches beyond religious differences and across the growing disparities between the affluent and poor,” as burrows writes.

in the tradition of the hebrew psalmist, SAID’s works are poems of praise and lament. burrows writes that “the poems we need are often the ones that refuse to leave us unattended.” they remind us “to look beyond what we know, or think we know.”

these poems, writes burrows, “bear witness to the heart’s descent into loneliness and despair, and gesture to the ascents we also know in moments of compassion and generosity.”

as always, poetry does the work of capturing the unspoken, unformed fragments of our heart, of our deepest imagination. the poet, as the butterfly catcher, employs the vessels of language to net, to gather, to collect the flitting-about, untethered, winged idea, the moment.

the poet does the work so we — the reader, the listener, the lonely pilgrim — can stake some claim of understanding in a landscape that until the moment of the poet’s poetry has escaped us.

the poet places us, solidly, in territory at once familiar and foreign. we trip upon the syllables of the imagination, and we find ourselves breathless at the poet’s deep knowing, at the exhilarating moment of loneliness collapsed. we recognize, we understand anew the depths of the human spirit, in wordform before un-uttered.

SAID addresses his psalms to “lord,” though not one bound by any religious tradition. he is certainly a late-modern psalmist, and his prayer poems speak to the complexities of the tangled fractious world in which we live. he explores the human condition with more urgency, perhaps, than he explores the divine. and therein is tension, poetry that refuses to leave us unattended.

one last thing, before i leave you with a psalm or two: about the 99 psalms, the number ninety-nine in the muslim tradition is the precise number of names by which Allah — God — is known. there remains one name — “the last/ the hidden” — that is unknowable, beyond us. so too with the 99 psalms; we are left wondering about the one beyond, the one which, perhaps, is written but not known, or not yet written. what might the unknowable tell us? why are we left not knowing?

here, a pair of SAID psalms that “refuse to leave you unattended”:

that we recognize you

with their grand airs and their daily needs

set your seal upon your houses

and don’t be afraid of our nakedness

let the cypresses be your messengers

for they stand upright and whisper

and don’t try to convert the wind

and now, one other, though choosing only one was tough, indeed…

from the multitudes of your guardians

stand by those who wander

who’ve not lost the gift of hearing

and listen within their solitude

stand by those too

who stay and wait for you

chair friends, i come to you on a wednesday, because in the publishing world these days, blogging about a book is one way to cast wider the net. and today was the day they asked me to write.

i ask: is there a poem in your life — or especially in your now — that refuses to leave you unattended? and what about the 100th psalm, do you wonder what it asks or says?

11 Comments to “99 psalms: prayer-poems that “refuse to leave us unattended””