a place to curl in summer 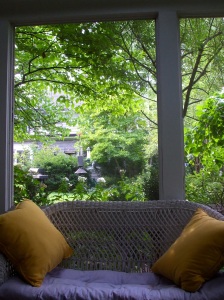 it goes back, way back to the summers when i’d find a log — a particular log — in the woods across the lane, or nestled along the green pond, so named for the otherworldly martian-colored skin that magically unfurled across the surface overnight when summers turned hot, turned midwest humid. and the overspill pond went from patched with lily pads to bank-to-bank neon green.

i must have discovered early on the gift of making like a toad, and shrinking way down low, inside the swaying fronds of weeping willow, beneath the rustling of the oak-tree giants as they’d shake arthritic, creaky limbs. i might have taken to a particular rock, another favorite perch, down at the woodsy corner where the stream, after thrashing summer storms, practically roared, as rushing water body-blocked against the boulders that dared to interrupt the get-away.

or maybe it was inside the play house, deep in the grove at the back of our yard, where i made believe i was a pioneer, ala laura ingalls wilder, and it was my little house in the big woods. there, i’d arrange and re-arrange the table and two chairs, the upturned coffee can i pretended was a cookstove. i’d sit and look out the paned windows, i’d tuck wildflowers in jars, set the table for my imaginary children, who’d come for victuals when i clanged the dinner bell.

it might be any one of those wonders — or even my cincinnati grandma’s upper porch, an ivy-screened brick-and-limestone veranda overlooking the sloping woods, and the cattails in the distance, where the woods turned boggy. might have been there that i learned to love the nightcall of the wood frog’s love song, or the late summer buzz-saw of cicada.

whatever the source, it’s never gone away, my inclination to hide behind a scrim of leafy green. make like i’m just another butterfly, or lady bug, landed on a broad green pad. and keep watch on the world that doesn’t know i’m watching.

it’s why i lug my books and pens — and pitchers of lemony water, and plates spilling with whatever’s served up in the summer kitchen — out to what we call the summer house, only really that’s the name bequeathed to us when we bought this place, this old shingled house and the gardens that pay no mind to where they’re told to grow. it’s the screened-in porch, tacked onto the garage, for heaven’s sake. but it’s just about my favorite place to sit and watch the summer, frame by frame.

i’ve been calling it “the office,” and it’s been open for business for weeks now. when anyone comes calling, comes to pay a visit, sit a spell, it’s where i take them for a healthy dose of conversation. for a chance to brush up against the magic of a ceiling fan that whirs, and mama wren chastising the cat, or the rare butterfly fluttering by.

it’s a fine thing to have a summer’s perch, a place from which to watch the sun arc across the sky, to spy the wispy bits float across a sunbeam, to catch the glint of the spider’s web in a flash of early morning. to watch the summer theatre unfold unnoticed, according to heaven’s script, without human interjection.

it’s one of the gifts of this old house that i’ve been relishing this week, as i noted on my calendar that a year ago wednesday, i’d felt my heart all but yanked from my chest, as i boarded a plane for boston and left behind this garden in august, this house when autumn’s light was just around the corner.

because i can’t write with all the relish that i like, here on this friday morning when a deadline is staring me in the face, i thought i’d keep up my end of the bargain, by inviting you into the virtual summer house, and sharing a short stack of good reads (plus one “watch”).

here are a few fine things i’ve stumbled upon this week…rifle through the stack, and see if any float your boat…

a little-known letter from e.b. white on why he wrote charlotte’s web (found in slate)…

watch this: one dream, the trailer for a new documentary telling the behind-the-scenes story of martin luther king’s “i have a dream speech,” a new endeavor from red border films, a project from time magazine..

and finally, from close to home, my dear friend and lifemate, blair kamin, launched his e-book on the gates of harvard yard this week, and you can get a peek here (the book itself can only be viewed on iPad, which i don’t have…..) or, even better, a wonderful Q & A here….

that oughta keep you busy, wherever it is you squat in summer…..

13 Comments to “a place to curl in summer”