“by little and by little”: dorothy day, a guide to loving 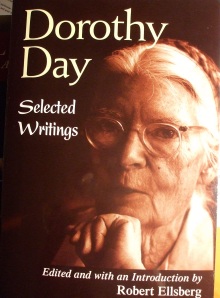 dispatch from 02139 (in which, at long last, there is time in the day, here on the banks of the river charles, to take a few lessons from one of the 20th century’s modern spiritual pioneers and religious revolutionaries, dorothy day…)

if sabbatical has its roots in sabbath, to rest, to restore, then that is what pulled me, three months ago, to sign up for religion 1004, “modern spiritual pioneers and religious revolutionaries.”

i scanned across the list of saints whose lives we’d be studying — gandhi, martin luther king, thich nhat hahn, abraham joshua heschel — and i was hooked. i saw one more — dorothy day — and i was writing the professor begging to be allowed at the seminar table.

dorothy — for i don’t think she’d want me to call her ms. day; she’s not like that — has been my deep catholic hero for a long, long time. her brand of catholicism, the catholic worker movement founded, in part, on hospitality houses for the poor, the lost, the wholly left-to-the-margins, is the brand i still believe in.

stepped into my first dark confession box back in those turbulent days — just post vatican II, when the church was turned on its head, a year after JFK was assassinated, at the height of the escalation of the vietnam war — heard the opaque window slide open, heard the priest’s breathing, heard my own heart pounding as i scoured my soul, got ready to spill all my sins there on the ledge. tasted my first dry, wheat-y communion wafer. wondered what to do when it got stuck on the roof of my mouth.

and then, in seventh grade, it got really deep: we had a nun who’d stripped off her habit, who stood there in sweaters and skirts, strummed a guitar, and turned off the lights so we could watch — over and over — “the red balloon,” sing kumbaya. radical jesus — with his long curly hair and sandals, friend to the thieves and the whores — was a god made for the decade of protest, anti-establishment.

all along, i’d spent hours at bedtime, praying that i could be better come daybreak. be more of a saint. try harder. one lent, when i was in third grade, i think, i got up early, rode my bike to 7 o’clock mass every morning. because i thought it would make my soul shine brighter.

and then, along came the likes of mother theresa and gandhi, and later, dorothy day.

they were my brand of catholic. they scooped souls out of gutters, touched the untouchables, turned away from the gilded altar cloths and the chalices locked away in a safe in the dark of the church.

they were what drew me to appalachia in college, what pulled me into a soup kitchen on the west side of chicago. they and my mother, truth be told.

but my mother has never written out her theology, just told me once, in a few short words (all i needed to hear really) that, after my father died, she figured she’d devote all the days of her life to God, and live a gospel of love. so she does, and i watch.

over the years, i’ve read snippets of the life of dorothy day. knew enough to call her my hero, claim her as my personal saint.

but i hadn’t taken the time to pore over her writings, to absorb the whole of her story — in her words.

and right now, because we’re at that part of the reading list, because for the next two weeks, on mondays at 4, i’ll be sitting at the seminar table in the great gray stone tower that is harvard divinity school, i am reading dorothy. curled up on the couch with her all yesterday afternoon, an afghan under my bare toes, a fat mug of tea and an orange fueling me along the way.

i read paragraphs that could change me forever. so, of course, i’m sharing them here. see if you, too, discover a trail to carry you through the rest of your days, even the days when we’re lost in the deep dark woods. (the italics, for emphasis below, are mine.)

“…she did not expect great things to happen overnight. she knew the slow pace, one foot at a time, by which change and new life comes. it was, in the phrase she repeated often, ‘by little and by little’ that we were saved. to live with the poor, to forgo luxury and privilege, to feed some people, to ‘visit the prisoner’ by going to jail — these were all small things. dorothy’s life was made up of such small things, chosen deliberately and repeated daily. it is interesting to note that her favorite saint was no great martyr or charismatic reformer, but therese of lisieux, a simple carmelite nun who died within the walls of an obscure cloister in normandy at the age of twenty-four. dorothy devoted an entire book to therese and her spirituality of “the little way.” st. therese indicated the path to holiness that lay within all our daily occupations. simply, it consisted of performing, in the presence and love of God, all the little things that make up our everyday life and contact with others. from therese, dorothy learned that any act of love might contribute to the balance of love in the world, any suffering endured in love might ease the burden of others; such was the mysterious bond within the body of Christ. we could only make use of the little things we possessed — the little faith, the little strength, the little courage. these were the loaves and fishes. we could only offer what we had, and pray that God would make the increase. it was all a matter of faith.”

— from “Dorothy Day: Selected Writings,” edited and with an introduction by Robert Ellsberg.

by little and by little.

now there’s a theology i can grasp, clench in my hot little fist.

these were the loaves and fishes.

we could only offer what we had, and pray that God would make the increase.

most days i don’t have much. but by little and by little, i can steady my wobbles, and put one foot forward.

i can try, with all my might, to live a life of love, by little and by little.

there is much this week to pray for, in the heartbreaking wake of hurricane sandy, who has left my beloved in-laws without heat or light or power on the jersey shore, who has turned my sister-in-law’s new york brownstone into a hospitality house for all those with nowhere to go. who spared us, and our sweethearts in maine. for all the heartbreak, up and down the eastern seaboard, i pray for repair and for strength, by little and by little.

your thoughts on the wisdom of dorothy day? and if she’s not the one who guides your days, who is?

15 Comments to ““by little and by little”: dorothy day, a guide to loving”