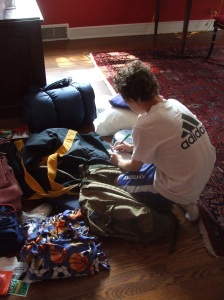 since the deep dark night, 10 years and 10 months ago, when my longtime beloved obstetrician, the one who’d been sitting beside me chatting away the hours like a girlfriend at a slumber party — albeit with one of us increasingly squeezed around the middle, as one of us was deep in labor, about to birth a long-awaited, much-prayed-for babe at the ripe old age of nearly 45 — ever since she, the OB goddess, leapt from her leaning-on-the-bed place, thrust her arms through the sleeves of her backwards surgical gown, whipped on the superwoman goggles, and looked straight into my eyeballs — as the monitor slowed its beeping and the wiggly line lost its deep dips and rises, as the blinking numbers dropped from way high over 100 to down toward the crucial century mark — ever since she spelled out in no uncertain terms: “here’s the plan. you’re going to push this baby out in two swift pushes. got that?”

and i swallowed hard, knowing deep inside just how much she meant business, serious business, as i read the monitors and all but said aloud, “i am not losing this dream now; no way, we’ve come too far. it is not slipping through my fingers now.”

as i reached around me for all the angels, saints and glory-be’s there in that darkened room, where just a single shaft of spotlight shone down on the still-empty stage, ever since that night, when i did as told, and finally, blessedly, miraculously, heard that baby’s cry, i swear half my every heartbeat belongs to the one i’ve long called my “little one.”

and i am leaving him, day after tomorrow, in the woods.

all week we’ve been piling up old t-shirts, fairly ratty shorts, towels that won’t mind a stint inside a musty dingy cabin. any hour now, we’ll begin to load it all into the giant duffle bag the little one’s big brother carried to the same camp in the same woods four summers in a row, long long ago, it seems.

as a matter of fact, when i climbed to the attic the other afternoon, and hauled that duffle down, we unzipped it and found inside the very letter that the then-five-year-old little one had dictated to his big faraway brother.

i was standing out back, airing out the duffle, reading aloud the letter once again to the big brother to whom it was written, when the little one — the long-ago letter writer himself — came scurrying up the walk, in from a ballgame in the alley. he laughed at his five-year-old word choices. but i tell you it was a poetic passing of the north woods torch that could not have been more aptly scripted.

he took the folded white sheet of paper, and held it tight. i saw his imagination begin to count the possibilities of those impending woods: the eagle, the sloth, the thunder claps. i saw his lips curl up in smile.

then we got to work digging through the rest of the duffel, pulling out squished ping pong balls, a ping pong paddle, a shrunken bar of five-year-old soap, old band-aids. it all served as inventory, accompanied by big brother dialogue, a sort of show-‘n’-tell, a talking guidebook to sleep-away camp in the deep dark woods.

as seems to be happening so often around here these days, i am scratching my head, glancing in the rear-view mirror, asking, how’d we get here so suddenly? wasn’t that little guy the one sleeping in the car seat behind me, as we drove home without the big guy, having left him behind for the very first time? how in the world could it be that my baby, my boy who quivered at the thought of the fourth-grade outdoor ed trip (a three-night, four-day trek that had him worried for months and months in advance), how could it be that he, out of the blue, decided that, just like his big hero of a brother, he was going to camp hayo-went-ha the summer after fifth grade ends.

so here we are.

to tell the truth, i think he might be just as curious about this odd twist of travel tales as i am. most of the week, he’s been too full to finish even half a waffle at breakfast, a whopper case of butterflies having moved in and occupied the tummy real estate. he is wandering up to me, out of nowhere it seems, throwing his arms around my middle and declaring, “i love you.” and that’s not all: then he plants a kiss, lips to cheek, and holds it till i all but melt.

hmm. the deep dark woods must do that to a first-time camper.

we’ll fall asleep tonight, he and i, with curly heads aswirl with woodsy dreams. in the morning, we load the car, point north and drive.

i cannot begin to imagine just how empty i will feel when we drop him there and — after tromping to his cabin, tucking in his sheets, reminding him two or three or 10 times to use the toothpaste and sunscreen — his papa and i, both brushing back tears, swallowing harder than in a long long while, slide back into our little southbound black sedan. without him. driving 356 miles. without him. without him in the little carseat he once filled out. without him, now nearly 4-feet-11-inches long, chattering the whole way home. without him.

it’ll be 14 days and counting down.

but i can’t begin the countdown. not yet anyway. we’ve still to pack the duffle. still to quell the butterflies — his and mine. and then the prayers begin. “holy garden angels, please keep him safe.” my moonbeam baby, born in shaft of midnight light. the other half of every heartbeat. from now till the end of time.

because a mama’s gotta do what a mama’s gotta do, i was up nearly the whole night last night, typing a magazine story. so i am bleary eyed here. and will post a dispatch upon return. this here is pretty much a space holder, till the real story flows. along with tears. plenty of tears. of that i have no doubt. i am leaving my little one. in the woods. 356.58 miles away from home sweet home.

Filed Under: little one, mother and son, motherprayer
Tags: motherprayer : off to summer camp

5 Comments to “little one leaving”