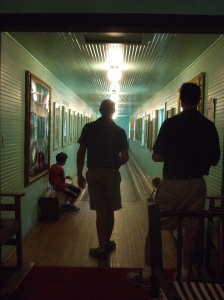 for seven sweet days, we escaped.

i though had my heart set on one thing: savoring the days, the hours, the minutes. every drop of it. i licked my lips of it, let it drip down my chin. didn’t care a whit if it stained the front of my shirt, so sweet was the one last chance to slip away, to stay at the little mirror lake where we have spent sweet summer weeks in the past.

at week’s end, as we locked up the house and pointed the car south, toward home, my firstborn said quietly: “this is my last time coming home.”

what he meant, of course, was this was the last time the homecoming would be back to the place where he’s grown up, where he’s spent his years since the middle of fourth grade, the place that soon won’t be the epicenter of his daily whirl.

while we were motoring home yesterday, the chicago tribune, that newspaper where i type, was running an essay they’d asked me to write, about taking my firstborn to college.

because there is never enough room on the printed page, it had to be trimmed at the last minute. but i never have to trim here, not if i don’t want to. and this time i don’t.

and besides, plenty of you don’t read the tribune, don’t have it slap on your front stoop, come sunday mornings. so for all of you, and for the record, here is the unedited version of “roots and wings,” an essay that ran in the chicago tribune of sunday, august 7, 2011, less than three weeks before my firstborn shipped east for college…..

I’ve been practicing for months. Practicing what it will be like when, in a few weeks, my firstborn is packed up, flown off and settled into a dorm on a campus on a hill in a town some 1,000 miles from the old house where his stirrings have been the backbeat to my every day.

Just to see what it feels like, I find myself walking past the bedroom that’s hard off the landing on the way up the stairs. I peek in, see the bedclothes unrumpled, just the way he left them.

Sometimes, if I’m drawn in, I take a few steps beyond the door, look around, breathe deep of what it will be like — when the piles on the desk no longer teeter, when the soggy towels aren’t plopped on the floor, when, for months at a time, there’s no trace of him in our midst.

My firstborn, at last, is headed off to college.

And while, for the life of me, I cannot picture this place without him, I know deep down that the whole point of this exercise called parenting is this soon-to-come parting, no matter how hard.

While I might be practicing this new long-distance mothering — imagining what it’ll be like to not see the light shining from under his door at 3 in the morning, to not hear his books thump on the counter when he lopes into the house, to not wake at 5 to stir his oatmeal and send him off with a hug and a kiss — and while I can’t even begin to imagine how it will feel to look into his eyes one last time and walk away there on that leafy New England college quad, I do know that the real work started long ago — and for that there was no practice, only sheer trial by error and hope.

Day after day, hour by hour, bump after bump, for the last 18-plus years, I’ve been getting him ready for this great divide.

I was cradling that lanky baby in my arms, back in our city garden one hot Sunday afternoon, when a wise friend of ours, a priest actually, stood in front of a circle of people we love and told my husband and me that we had but one essential job: Give that child roots and wings.

Roots, so he is forever grounded, solid, deep. Wings, so that some day the wind will catch beneath him, and he will soar.

Roots, I’ve come to learn, are laid down slowly. They’re laid down late at night in kitchens, when the tears come, and the stories from the playground are enough to break your heart, but you stand there like a sponge, taking it all in, soaking up every drop of the hurt, whispering words of unswerving faith.

They’re laid down on long walks where you listen to the boy spill his dreams, and you let out his kite string; you say you believe, and you mean it.

They’re laid down after school at the kitchen counter, when you open wide the refrigerator and let him have at it, while you sop up the dramas of the day, you listen to the questions and the quandaries, and you offer up the scant teaspoons of wisdom you have to offer.

They’re laid down so when you get to this summer — the summer when your kid packs up the boxes, leaves home, steps into the college life of which he’s dreamed, for which he is so very hungry — you can stand back and watch what happens.

What you hope, what you pray for, is that while you’ve been hard at work cultivating those roots, the wings, undetected, began to unfurl.

Oh, sure, you’ve seen starter flights. The road trip in a car packed with 18-year-olds where you stayed home and held your breath. The lightning storm that hit when your kid was out on a boat in a river, and somehow he made it back to shore and stay alive, holed up — in defiance of science and common sense — in a metal boxcar used as a boathouse.

But, so far, the nest he has flown home to was yours, the one you’ve watched with vigilant eyes.

From here on in, the wings and the flights are all his.

so that’s my meander for the week, sorry it’s coming to you a few days later than usual. but i am delighted to type today’s date into the meander box: today is a date i love. it’s my little one’s birthday. and his first foray into the land of double digits. he turned 10 today, my little one. and while his brother gets to work on all those winged expeditions that are on his agenda, the little one’s still home where we can spend plenty of days ahead setting down those deep-set roots. happy birthday little T. we love you madly. xoxoxox

p.s. the photo above is an old-fashioned bowling alley, maybe the oldest in america, that we discovered on our little week away on mackinac island. my boys in silhouette. i love the way the light plays off the monticello blue walls…..

6 Comments to “roots and wings, unedited”