the gift of ahhhhh…. 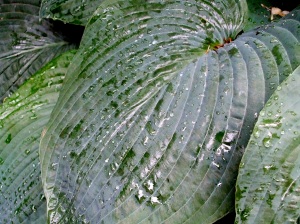 the morning around me, at last, is gray. like an old cashmere blanket pulled from a chest, it wraps me.

the dirt in the garden is dark again. puddles pool at the curb. the leaves, nearly every last one of ’em, are beaded, are shimmering, what’s left of the wee-hour rain.

holy respite this morning. as if the whole globe let out a sigh. started to breathe again.

too many days in a row here, even at dawn, it’s been bright white when you awake. the sun, working overtime. as if someone shuffled off to bed, forgot to turn down the thermostat. ol’ sun, just cranked through the night.

when you start out the day dodging the heat, plopping ice in your coffee, mapping your walk to the train by tracing the shadow, sticking close to the side of the street where the shade falls, you know it’s an uphill of a climb.

and now, as with so many sieges, it’s taken a pause. given all of us mortals, or at least the ones who get prickly in heat, a chance to inhale, to shake off the sense we’d entered inferno.

i’ve been holding my breath all week, knowing, trusting, the end would come.

all day yesterday i was tracking the cold front. so much so that the people who type all around me found themselves wholly amused by my weather refrain.

thing is, i grew up with a mama who lived and breathed for that cold front, when the winds took a hook, made a drastic, resuscitating U turn. stopped their unrelenting howl from the south and the west, where, fueled by the desert and infinite dry, dusty plains, they’d reached insufferable digits, and then, without flutter or warning, they’d turn right around, come off the lake, that long lean ever-cool lake that is chicago’s cooling station.

why, my mama would yell, closest thing to a hallelujah i ever heard, “cold front! cold front! open the north windows!”
and we’d all start the cold-front dance, all of her hot little chickadees. we’d bang up the stairs, shove open the double-hung panes on the side of the house nearest the wind-change, then we’d whirl into the yard where we’d stick out our arms, making like bi-wings parked at an airfield, and we’d spin and laugh till the last drop of sweat was absorbed.

then, to polish it off, we might troop back to the kitchen, where we’d plop the last of the frozen kool-aid cubes, the ones poured as bright-colored potion into the clanky old metal ice-cube tray, the ones we had to wait for for hours, the ones that made your tongue and your lips and your chin and your knees (if they dribbled that far) an odd shade of red. a red that wouldn’t go away without scrubbing.

seems me and my brothers just grew up believing in the cold-front refrain. we knew it was coming, sooner or later.
and once it came, all frolic came out.

our house growing up wasn’t necessarily filled with frolic, but that cold off-the-lake air, it made my mama dance. and we leapt right along.

not a bad lesson, when you think about it. knowing full well that the hot air will end. that if you endure it long enough, that sense that someone’s kicking your head, and you’re about to buckle right at the knees, that odd knowing your poor heart is trying so hard to keep ticking, it all up and evaporates.

once the cold front comes. once the winds turn around.

and so it’s been this week. we put up with hell to get here to the reprieve. where gray, and not bright, is a beautiful color.

hey, someone open the windows.

how did you survive the heat siege, which seems to have swept the whole country, ‘cept for marquette michigan where the weathermap tells me, they clocked a measly 78 degrees?
and, speaking of lessons, was there one particular lesson you learned over and over, one drummed in your head when you were a kid, one that comes in handy now that you’re all grown up, and the one now charged with deep understandings of the rhythms of life?