hero of the woods 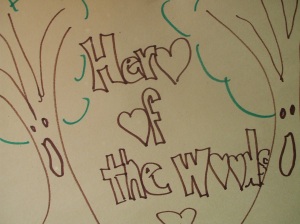 in perhaps the bravest move of his nine short years, my little one took to the woods this week. for three days and two nights.

which, to him, felt like forever. or at least that’s how it felt going in, how it’s felt for the last three years. ever since he first heard whisper of this fourth-grade ritual, called outdoor ed.

now, the little one that we love around here, he’s not such an adventurous boy. he prefers his own bed to any bed in all the land. likes to be surrounded, at least upon nightfall and wake-up time, with those he knows and loves.

he has stumbled through a trio of sleepovers in recent months, all in training for the big adventure in the woods.

at long last, december 1 arrived. as dawn peeked through the windows, as the sky shed its indigo nightclothes, pulled on rosy-fingered trousers, from the ankles up to the knees up to the hips, the boy awoke. eyes fluttered. tummy did too.

he showered, dressed in layers, sat down to oatmeal. he was spooning quietly when i looked up and saw his big hazel-brown eyes begin to moisten. then the cheeks wobbled. and, well, the bowl of porridge was soon saltier and wetter than when i’d plopped it from the pot.

kisses from all sides–from mama, papa, and big tall brother–got him o’er the hump. then, bravely, he slung on his duffle bag, zippered up his coat, and stepped out into the frigid morning air.

soon as he and i and the old wagon pulled up to the schoolhouse, we saw the caravan of buses. big buses. open-mouthed buses. buses idling at the curb.

he walked tall, that little one. slid his bag into the bus’s mouth. accepted one swift kiss, and was off.

it’s been that way all week: eery. quiet. empty.

will this be what it feels like next year when the tall boy is off at college? will i live to know how quiet it will be when even the little one is gone?

quiet is among the tonics in my medicine chest. it does me good. soothes me. settles me. brings me back to whole, instead of frazzled, torn, ragged at the edges.

quiet is the door through which i slip into sacred places. it’s when i hear the whisper of the Divine. it’s when my angels talk to me.

but this week, the lack of footsteps from the room above… the gloves that never moved from the basket by the door… the bed pillow that sat plumped all week…

it was a hollow sort of quiet.

it was a quiet that stirred me in a lonely way. a quiet that made me wonder how that little one was faring. was he feeling lumps and tumbles in his tummy as he lay down to sleep? was he looking up into the same starry canvas that i was, as i wandered home one night, late from work, late from the train, and wished upon a star that it would twinkle down on him? did he know that i was holding him in my heart at every turn all week?

did he remember that i’d whispered in his ear: “dig deep, sweetheart, you can do it. remember, you’re the egg that wouldn’t take no for an answer. you are the blessed child the doctors said we’d never have, but here you are, determined, triumphant.”

it’s friday now. he’s made it. two nights, three days. the call from the woods never came, the one that might have come had he crumbled.

(oh, by the way, after one sleepless night, night before last, the phone did ring, shook us from the bed, at 5:50 a.m. i swore it was the school nurse, calling to say he’d gotten the flu that’s sweeping through this town, or the principal, saying ‘this boy has a bad case of the homesick blues.’ ’twas neither. it was WGN, the radio station in town, calling to see if the little one’s papa would talk on the radio at 6:15 A.M. ((note the not-oft-employed capital letters there, signaling my complete dismay that they would think to call before even the sun was up for work)). oy.)

it’s friday now, and the brisket’s in the oven, as promised to the little one. streamers are strung, a spider’s web of triumph, this way and that up-and-down-and-sideways through the front hall. posters, welcome-home signs, you-made-it signs, line the walls and doorways.

he’s my hero of the woods, and it’s a hero’s welcome.

when, for three years, you’ve been worried sick, but still you fling the bag over your shoulder, feed it to the bus, and march into school, wobbly but undaunted, you deserve a marching band. and latkes. and a mama’s arms who won’t want to let you go, once they’re wrapped again around the little boy with all the courage. who, sure as sure can be, grew up mightily this week.

dear God of the bliss-filled quiet, thank you thank you for watching over that tender heart. and bringing him through the woods.

have you had adventures that scared the behoozies out of you before you left? but then, somehow, you mustered up the courage to make it through the woods?

4 Comments to “hero of the woods”