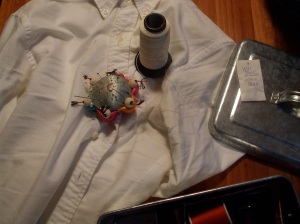 the question came late, of course, as i was tiptoeing off to bed, the house–except for one last bedroom–finally dark, lit by the few scant rays of moon that crept around the clouds.

“mom,” he said, coming to the door wearing white oxford and shorts, “some of these buttons are coming loose. can you get these?”

truth be told, it was 1 in the morning when this loose-button truth erupted. “not now!” i shot back, or maybe all i did was mutter, the details now are fuzzy. i’d been up late making a movie–oh goodness, doesn’t that sound all hollywood; fear not, it’s not something i do too often, in fact have never done before, but geez, it sure sounds fine in that there sentence. anyway, i was dragging my movie-making self to bed. the manchild was packing for his quick trip to college. (oh lord, that too was a test sentence: to see how it feels to write that he was packing for college.)

it is all, really, something of a test these days, this dabbing of big toe in college water, this slow unspooling process of a whole family absorbing the knowledge, through and through, that what we’ve been these past eight years–the whole of his little brother’s life–a family of four who wake up and go to sleep under the same roof, who know each others’ quirks and oddities, who leave red peppers off a certain plate, or stock up on slow-churn ice cream, who have memorized each other’s coughs and sputters and sloppy habits, we will soon be only three. there will be a bed that’s never tousled. there will be a bathroom sink that’s polished, unspattered, no vanity of goops and creams for me to rearrange most mornings. there will be no clothes flung on backs of chair, on floor, a dropped-and-heaped trajectory of just where he has disrobed.

ah, but like all of us these days, i am getting ahead of the story. i am peeking round the corner, trying hard as i can some days to imagine, just how quiet it will sound when he doesn’t bound in the door, fling his messenger bag, kick off his shoes, drop the headphones, dash up the stairs.

all he’d asked was if i could thread a needle, knot the thread, pull it through the oxford cloth, get those buttons cinched, taut where they belong.

and so, next morn, before the clock struck six, i sewed for college, sewed for the boy who was boarding the plane with his papa, flying off for that rare chance to sit down with a dean of admissions, say who he is, have someone listen.

i of course have visions of the dean picking up the phone, calling me, saying, where did you get this kid? he is magnificent, isn’t he?

but then, i’m his mama. i’ve been his ace no. 1 believer since the day i took his chubby just-born thighs into my hungry long-waiting arms, marveled over the whole of him, breathed promise into him and over him and through him, through and through.

i sewed those buttons taut, all right. whispered secret vespers with the tug of every thread. prayed for those buttons to hold it all together, straight through the interview–and far beyond.

it’s the least a mama can do. she can do so little by that point. her work, so much of it, has come before, in all those hours in the kitchen, the talking place so often in our house. her work’s been done in the worries and the hopes and the love notes tucked under pillows, in lunch boxes, sleeping bags and suitcases. her work’s been done in the driving and the shopping, and the riding, once, in the ambulance, and the checking of the mailbox for the letters from summer camp that rarely came. it’s unmeasurable really, the work that’s been done since that long-ago moment when the doctor called, said “blood work’s back; you’re pregnant, dearie.”

but at least, on the dawn of the day when he flew off to college, the sewing gave me purpose. gave me a string of stitches to pull through cloth, to knot, to carry to his room, to lay on his suitcase.

not too many nights before, as i was tucking the little one in bed, he looked up at me, a somber face suddenly washing over his sunburned cheeks. “can i ask you something i’ve wanted to ask for a long time?” he started, not waiting for my “of course.”

“is willie really going to go away next year? i don’t want him to go away ever!”

and then the tears came. to both of us. down our cheeks and soaking into sheets, a sloppy mess of gaping-open sadness, we were.

i thought of that as i sewed those buttons tight. i thought how much the sounds and rhythms of this house will change. i thought of the empty aching heart of his little brother, his brother who has only known life with a big brother always in the wings.

there’s a lot of shifting, looking round the bend, that’s going on here.

and all i could do was sew those buttons tight. and pray they lasted through the college interview.

we’ve got a year to stitch together all the rest. or get tangled in so many floppy threads.

i have a sense this will be but one in an occasional series of captured moments as we all try to wrap our heads around the change that’s coming, how the world as we know it will not be. we’ve all weathered–and worried about–such ebbs and flows in life. we’ve sent a kid to camp, to college. we’ve lost a spouse, a mother, a father, a child. we are here a table of folks who pay attention to the stirrings and the comings and the goings. we’re allowed to say here how much it hurts, when it hurts. mostly we’re allowed to sift through the messiness of the human heart. that’s why there is a chair at the table for each and every one of you. because here we understand that the most glorious side of being human is the one that’s tied to the heart, and to ignore it, to shove it under the table, well that’s to miss out on a whole book of beauty.
have you tightened buttons for a leave-taker? how have you readied. steadied yourself for a major shift in your life’s river? or were you taken wholly by surprise?

7 Comments to “sewing for college”