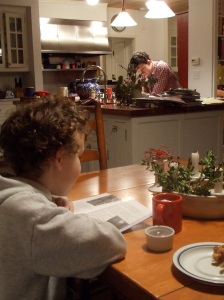 it’s rare in this house for both boys to be on the same page.

one is paying attention to grade points and the calculus of getting into college, the other struggles every day to turn that loopy shoelace into some sort of tangle to hold him all day long.

one reads nabokov and sartre, philosophers and existentialists. the other asks each morning if i can help him fold the sports page, where he’ll inhale the itty-bitty numbers, the rise and fall of grown-up men who bang around a ball.

and so, the other evening as i looked up from washing dishes, i saw two boys at work, two boys with snacks and pages open wide, two boys whose worlds had momentarily aligned.

mind you, when you accidentally give birth eight years apart, when you did not set out to span a half a decade with your offspring, it is a fundamental truth of your wobbly existence that you find you live not in instant replay, with one child sliding out of diapers as the other storms the scene, but rather you dwell in time delay.

whole chapters start and end between boys 1 and 2. one has journeyed off to summer camp, barely sent a single postcard home, while the other holds your hand and toddles up to bed. one has started shaving while the other learns to squeeze the toothpaste on the brush without it splurting in the sink.

one sits at dinner talking emerson and frost, the other squirms and tries to feed the meatball to the cat.

only now, eight years into this experiment in dual children, are we discovering the joy of occasionally, rarely, unpredictably, dancing cheek-to-cheek.

or at least hearing strains of the same music.

it’s new enough around here that still it takes our breath away, when the little one for instance pipes in with his opinion on which college his brother might consider. or, adds a cogent thought to a discussion about iraq.

and vice versa, it is stunning for the bookish older one to weigh in on some football matchup, or to lament a limping quarterback.

who knew they ever tuned in to each other’s world? apparently, they’re listening.

and just as they randomly begin to bump into each other’s orbit, we look toward the summer after next, and realize once again we’ll be a dinner table of only three.

which makes these days ones to milk for all they’re worth.

we’ve finally got a pair of bookends who line up on a single shelf. one’s reaching beyond the elementary, the other’s wise enough to find a common ground. (and occasionally haul the little one on his lap for a boa-constrictor squeeze.)

in the days and weeks and months ahead, i’ll not tire of the moments when i catch the pas de deux of brothers deep at work discovering the joy of sharing the same page.

in fact, i’m standing ready with the apples and the pretzels to fuel their kitchen study hall.

where, with any blessed luck, they’ll look up from homework page to see a fellow traveler they’ll choose to spend their whole lives long coming home to.

or at least dialing long-distance.

i almost ditched this in midstream, but then decided to keep on writing. no universal theme here, except perhaps the joy of discovering a sibling is not merely someone who sits across the kitchen table a couple times a day, but rather a someone whose particular gene pool makes for soulful kinship. when did you discover the many gifts of a someone who shared your own last name?