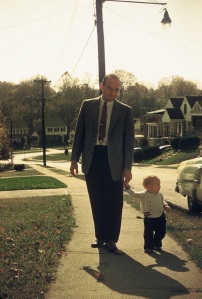 it is, like so many of the lines we draw inside our lives, invisible, undetected from the outside. and yet, for years now, it has loomed, larger and larger. defined me, in many ways.

if there is a lull in the whirl around me, there it creeps. the voice that whispers, “this is how it looked for him, the parting frames. these were his final days.”

my papa is the one whose eyes i see the world through right now. especially as i look upon the ones i love so dearly. the ones whose face i study. whose voice, whose laugh, whose footsteps i could pick out of a crowd of hundreds of thousands. the ones whose rhythms, rise and fall, thrum within me.

my little one especially. the one who holds my hand still, as we walk to camp most mornings. the one who, as i tuck him into bed, lets it all spill out in whispers, stored up, saved for that blessed hour at the edge of day and night when the stirrings simmer over. he is young enough, baby enough, to still climb into my lap, to still reach out while getting water from the fridge, and wrap me in a squeeze, unannounced.

i’ve done the math. done it over and over, for years and years. and now it’s come.

my papa died when he was 52 and six months and eight days.

that’s how old i’ll be tomorrow.

and as the hour comes, so too does the drumbeat in my heart. i am, in some ways, coaxing it over the line. don’t give out now, i tell it. don’t take me now.

and as i say those words, i imagine he did too. never would have thought his time was up. shouldn’t have been, damn that it was.

it is the oddest slipping of my self into his self. as if the two of us have, for these shadowed days, blurred, become the oddest form of one. i cannot not see the world through the lens of what must have been his. cannot not count the days, the hours.

i’d think it odd–might be too shy to mention it–if i’d not found out that i am hardly alone.

but months ago, i wrote about how it is to become the age your parent was when he or she died. and by the hundreds, i got letters. i am not the first, nor the last, certainly not the only one who’s done the final calculation. who knows, to the hour, when the line is crossed.

when, God willing, my life’s hours extend beyond the hours that were his.

and so there is a holiness like no other draped across these days. today especially, perhaps. the day ticking toward the last.

if you were told you’d one day left to live, how would you live it?

except when it’s not.

and i’d think this might be the closest i could come to taking a pass at that question in real time.

and so, this holy blessed day, i am entering into the hours as if a bride. i am paying supreme attention.

i’ve been in the garden, squished my toes in mud, as the hose rained down. as my delphinium and roses drank their morning’s rejuvenation.

i watched the sun play peek-a-boo with clouds.

i cuddled with the cat.

i let my little one sleep in. no camp today.

today, he and i are playing, the way it should always be. except most days it can’t be. we don’t let it be. most days we let life get in the way of living.

we are holding hands today. walking down the street to a place where the screen door slaps, and the kitchen cloud of frying bacon and coffee perked and pancakes sizzling on the grill wafts out onto the sidewalk.

we aren’t walking by today. we are asking for a table for two, please. three, if his big brother will join us. will make a holy celebration of this day.

they’ll not know why it is their mama seems full to bursting all day long. they’ll not hear the unspooling dialogue inside, the vespers of deep thanksgiving, the holy pleas and promises.

they’ll not know how very merged is the consciousness of their mama and their grandpa geno, as she and he criss-cross the holy line of what was his, and what is hers. and she holds up his final hours, once again, in a sacramental lifting, one last time, of a holiness that for so long has defined her.

her papa’s life cut short. too short. and a long-held prayer that she’d do right by whatever hours came to her.
dear God, be with us all. this most holy day, and every other.

an odd sort of meandering today, perhaps. more like the whispering of my soul. in white-on-black. like trying to catch a cut-glass rainbow, splattered on the wall. trying to wrap in words this inescapable line in the landscape of my soul. it’s an odd, sad mix of fear and hope, of chest-expanding promise and crushing loss. i’ve no choice, really, but to go on a prayer, and plan on being here tomorrow. not just for me, but, especially, for that little one i so love, who still so deeply needs me. as did my brothers need their papa, as did my mother. as did i.
how would you spend your hours if you had some inkling they might be among your last?