every blessed one of us 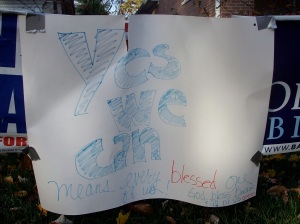 every once in a rare wind, we catch that holy knowing that what just blew past us stirred us, changed us, unalterably altered the landscape, before blowing on again.

so it was the first time, four summers ago now, when i heard the voice inside the squawking box call out to all of those crowded into boston’s convention center, and to all the rest of us tuned in as well, to tear down the schisms and the walls and the barbed-wire coils that divided us into red states and blue states, and to live up to becoming the united states.

we could be better than we were, he prodded. we could cast aside the shadows and the darkness that had crept in. we could, perhaps, let in the light.

i put down whatever it was i’d been doing, thinking, being, and i paid attention.

i heard the voice of the rare hero–true definable hero–who spills with courage and conviction to utter words, carve thought, that until now no one else had been brave enough to breathe out loud.

but once the words rolled off his lips, they were unloosed, free, a part of what we breathed. if we chose to. if we inhaled and filled our lungs. let the truth sweep through and all around.

and so, for years now, i’ve been a believer in what i’d not call his brand of politics, for it’s not so much political (though by definition–“concerned with government”–it is that) but rather wholly of the spirit.

and spirit, i’d suggest, is that force of wind and water and earth and flesh and blood that, once unleashed, leaves nothing in its path quite the way it had been.

where there is darkness, there comes light. despair transforms to hope.

it is mystical, yes. indefinable, indeed. but always unmistakable. it alters terrain and sky and soul.

and so it is that these days and weeks of late have been so very very dark. we wake to news that makes us tremble. we grope for some small wisp of promise and find it plainly up and gone.

but then on a tuesday in november, we each of us trooped alone into a curtained box. we tapped a screen or–in the county of cook in illinois, at least–drew a line connecting front and tail of a broken arrow. some 120 million of us exercised a choice, 63 million chose the one who i chose too.

in a moment too deep and big to wholly grasp in one solitary breath, we took in the ka-ching of history. we felt the streaming down of tears–our own, and nearly every face we looked up to see.

as we sat glued to the unfolding news, we could only imagine the storyline unreeling through so many minds. could only barely grasp the pictureshow that until now had never allowed for a frame so filled with what was whirling through the night.

it was late, but phones rang anyway. in swept stories of merry mobs closing streets and dancing down the great boul mich in sweet chicago. in brooklyn, cars honked and mamas and papas, entwined, lifted sleeping babies out of cribs to swirl in circles. in kenya, crowded ’round a village radio, not-so-distant kin danced and sang. the immigrant’s son was lifted high, from grant park to selma to nyang’oma near the shores of lake victoria.

then the dawn came, and with it the rush of morning-after analysis that for once filled the early light and our hearts with hope.

i lay there feeling a holy rumbling deep inside.

we can be a better people, i heard the words come.

we can be a nation inspired by the man we just elected.

we can put down the barbed-wire coils and the barricades.

we can, in our own small way, be brave, be bold, be the breath of hope.

we can be mighty in the extraordinary ordinariness of our everyday.

we might not, all on our own, wave an olive branch to iran or north korea. but we might ring the bell of the old bent man next door who cares night and day for his dying wife. we might fill a plate with what we’ve stirred for dinner and bring it to his door.

we might roll down the windows of our car and shout good morning to the crossing guard, and garbage man, and just a fellow pausing at the light.

we might, next time we hear the ugly growl of gossip, speak up, say, whoa; unkind, unfair, don’t go there.

yes we can, he says again and again. yes we can, he called out into the night in the middle of america in a city park flooded with believers and those who needed to see it for themselves to believe.

yes we can, i thought this morning as i lay there drinking in the news. yes we can, means every blessed one of us.

every blessed one of us need be brave. we need be brave like the man who, because of nothing other than the pigment of his skin, stands at risk every time he stands before a crowd. but not once has he shied from standing there, saying what must be heard.

and so, my bare arms–and my courage–warmed by the sunlight of this bright new day as i strolled out to snatch the morning papers, i grabbed a pen and poster board, and scrawled my humble message:

yes we can means every blessed one of us, i wrote.

and because i’m practicing that very creed–being brave and somewhat unafraid–i grabbed a roll of tape, and stuck my sign onto the other signs posted in my yard.

it’s not so important that anyone stops to read it, as it was essential that i said out loud just what i meant.

the words, once unleashed, are freed. they might become a part of what we breathe. if we so choose.

but if we keep the words, the thought, locked deep inside, they stand no chance.

and neither does the world that might do well should every blessed one of us believe.

after two long nights of no sleep–i couldn’t wait to get to the voting booth one night, and i was too thrilled the next–i am doubtful that a single sentence up above is coherent, much less filled with the power or the poetry i heard in my head hours ago. i’ve long steered clear of politics here at the table, and don’t much consider this anything other than once again looking through the holy lens of how we choose to exercise the divinity that dwells within every blessed one of us….your thoughts?

8 Comments to “every blessed one of us”