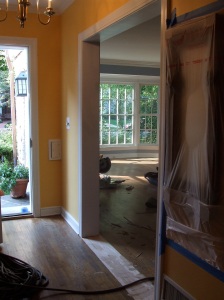 it’s what happens when you buy an old house, a house that hadn’t been loved in a while. a house that, like me some days, is a bit worn-out in obvious spots. a bit saggy and scuffed, and not so polished if you peek, say, under my sandals–i mean, er, under the rug, or rub your thumb down the cracks in the walls, cracks that run courses so long and so wobbly they rival the ol’ mississippi.

fact is, you move in with a list so long you think you might never really get to the end.

but trouble is, you–old stubborn goat that you are–you have every intention of getting there, to that place where all the walls are finally tucked and the roof isn’t oozing with each sloppy rain and the floors aren’t spotted with whatever it was someone’s lazy ol’ cat left behind.

it’s what happens when you aren’t like some who are deeply endowed and who do all these jobs–the ones that have you hanging out windows gasping for air, the ones that have you washing your dishes in a paint-splattered sink in the basement for so many months the mice come in, and feast every night on your scrapings–yup, i’ve seen it myself, the deeply endowed do all these jobs before hauling so much as one single rug into said ramshackle house.

nope, you never did grasp the math–or the magic–that allows for such dual domiciles, the one you do work in and the one that keeps you this side of sane.

so you, like me, you move in and you know that, pretty much, for the next century or so, you will be shuffling your this and your that into and out of one room, and right onto another. making like your house is a chessboard and your box after box is the front line of pawns, the rooks and the knights, all clanging and banging their way toward some other end of the chockablock maze.

you will be shoving the piano from one end of the house to the other. the rugs you’ll roll and you’ll lug, like a dead cobra, perhaps. one that swallowed an elephant just before gasping its last.

oh, you’ll be taking advil by the fistful for all the aches and pains that come with the heaving of trunks and, heck, the occasional two-ton stove. and you’ll stock up on those little white migraine pills that undoubtedly you’ll hungrily gulp to knock back the throbbers that come from the fumes you breathe in so deeply on the unending days when the satin-matte toxin wafts past your nose, wreaking who-knows-what havoc to the singular cell in your brain that’s not yet shriveled and forgotten its way.

but what really i need, in these days of deconstruction, is something far stronger than sedatives (though one or two of those might be swell, mixed in with my yogurt and berries, perhaps).

what i need, maybe, is a sense that life demands a breakdown once in a while. oh, i don’t mean one in the nervous department. i mean–be it a blood cell or an old dried leaf in the compost bin, or the parts of a house even–it must be written into the code of the universe that breaking apart, disordering what’s settled, is the first step in building back up. there’s no moving forward without a shake-up, a rattling, a walloping dose of disequilibrium.

if we lose hold of the long view, if we cling too mightily, too white-knuckley to the neat clean ledge of our life, well, then, won’t we just dangle, and eventually drop?

egad, i hear my own echo free-falling down through the canyon. was that a splat i just heard?

i’d best take a few deep cleansing breaths, and repeat after myself: it’ll all be over someday (now, there’s solace for ya).

maybe it’s all just a drill, a practice perhaps, to build-up my disequilibrium muscles, see if i’ve got what it takes to weather something so inconsequential as the fact that my couch and my keyboard are butt-up against what once was the one chair i cared to curl up in at the end of a long, long tiring day.

so it was that this week, once again, i rolled up my sleeves, yanked the hair from my eyes, and ripped all semblance of order from these rooms i call mine.

the floor man was coming. he with his army of buffers and sanders. his fumes and his colors.

his was the one last fix-it-up job–okay, the almost last job–the one i’d been loathing forever and ever.

had i had my druthers i would not have minded, not one little bit, the spots duly ensconced under the rug. i couldn’t be bothered, not hardly, by the odd gaps edging some of the walls. where the floor boards just stopped. a whole inch short of the wall in some of the spots–right where you stepped in the door, for instance. way i saw it, the absence of floor in those spots made for a fine well, a ditch if you will, where crumbs and odd hairballs could be brushed and disposed of at a mere moment’s notice.

ah, but the one whose ring i slipped on those many years ago, the one whose address is now always the same one as mine, well, he thought it high time–nearly six years, if you’re counting–to make like a grownup and spiff up the floors.

one ring-a-ding to the floor man, and, hmmm, seems the calendar’s sparse in the floor-buffing department of late, so without delay, he’d pencilled us in.

and i knew, without coaching, what had to be done.

with all the constructing that’s gone on around here, i’ve learned, oh i’ve learned, that with it–preceding it, accompanying it, joining in on each blessed chorus of hammers or buffers–there comes deconstruction.

i’ve come to loathe the stage in the game where what sits calm and serene–a lamp on a table, a rug minding its business under a chair–it’s up and upended.

rugs are rolled. lamps are stuffed in a shower that’s never turned on. saucers are tucked in a drawer that, hmm, i might not track down for days, weeks or months.

once one half of the house is slid into the other, i succumb to the challenge of coexisting with chaos. at breakfast, i shove boxes off the counter, to make way for cheerios and milk. after school, i make the little one suffer–or so he cries–because the box he so loves, for the baseball it brings him, it can’t be plugged in.

i tried, really i did, to give in to the madness. to not mind that we could barely squeeze through the kitchen. to not worry if i swallowed some dust with my coffee. heck, i just plugged my ears to block out the banging.

ah, but now as i type, tired and ragged from hours of fumes, from the long stretch without food, drink or bathroom when the floor by my office was sticky and wet and i couldn’t get out, the decon is ended.

the floors are mahogany now. the varnish is satin and smooth. the rug hides not a spot. and it rests, once again, under the couch and the slumbering chairs.

the house is restored. and soon i will be too.

a long night’s sleep, in a house that’s seeping its sorry old fumes straight out the windows, that’s all i need.

and when i awake, rub the dust from my eyes, i’m sure i will marvel at the uncanny fact that the boards under our feet are no longer pocked and pitted and rudely cut short of the walls.

and, as a matter of fact, i just might pat my old self on the back, proud, yes indeed, that i got in a round of disequilibrium practice.

but, wait, what’s that i see as i stumble to bed?

it’s floor stain splattered on walls. oh, Lord, could it mean what i think? the painter must pay me a housecall? and decon, again, is headed my way?

excuse me while i try a pencil eraser. anything, please, but no deconstruction.

it’s the disorder, people, that makes me nuts. anyone else go bonkers when your house is on end? how oh how do you cope? do you crave order in your life, and do you find it in the way you keep your house, or is that moot, (or pointless?) and do you opt instead for order of the interior psychic sort?