drumming my fingers for spring: the sequel 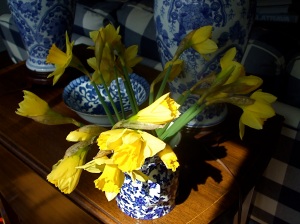 not to whine (which are the three surest indicators a whine is in the offing, the immediate offing), but they promised.

oh, sure, they said. snow melted by wednesday. warm winds aswirling. heck, i had visions of little spring things poking their sweet nubile necks out from under the insistently dripping-away ice crust.

i had visions of sweaters, and only sweaters. i thought boots would be shoved to the back of the closet. i thought i might be able to skip again–or at least ditch the old-lady shuffle that keeps me from breaking my neck, and my hip, or merely my spongy old wrist.

dang, i had visions of calling this dispatch, giddy. as in, i thought i would be.

here it is, wednesday, all right. and out my window i see this: snow snow snow. not white snow, or not much of it anyway. but rather whole gobs and piles and tundras of gray snow. black snow. snow that has, sorry, worn out its welcome. be white, be fluffy. but do not loiter long past the due date.

don’t know about you, but it’s all gotten me a little bit grouchy. like once when i was little and someone promised the circus was coming and i could go, too. but then the day came and went and not even a whiff of an elephant swishing its tail did i get.

i know i’m the one who said i liked my winters the real way. the pioneer way. hard and fierce, and pounding right on my windows.

but that was way back in february, before my inner hopscotcher-and-jumproper had fully awakened. this here is march. and they promised, is all.

it’s just all a big tease, is the problem. the light whispers spring. the big papa cardinal’s out there singin’ his lungs out. and the weather maps over the weekend showed bright shining arrows pushing the cold right up to some canadian lumberjack camp, where at least they’ve got the beards for these things.

geez, someone even thought it’d be funny–hysterically funny, i’ll bet–to flip all the clocks forward, trick us into pretending, what, it was the third week in april. ha. some joke.

here it is four whole days later and i am still thinking its lunch time when really it’s time for the dinner to bubble away there on the stove.

so what if my children are slurping their soup at quarter till eight, and then rolling to bed, because the clock says so. and only because.

far as i know, i’m not the only one grumpy. even the sparrows, the ones outside my window, they’ve given it up. ditched the whole plan for that egg-hatching nest. they seem to be huddled instead under a dried grassy blanket. chattering their little bird teeths.

my cat apparently catches their drift. i open the door, the way i usually do, he looks bothered, darts me a glance. “you must be joking,” he apparently thinks, as he tucks his tail right back under his haunches and refuses to budge.

it is all rather hopeless.

i mean, what is the point of all those deep stirrings inside? the ones that want to break out the pink and the soft seafoamy green. the ones that drool for a fiddlehead plucked from the woods. or a fat stalk of asparagus. or a strawberry that oozes its shirt-staining juice down your chin and onto your so-called bosom.

i, for one, am employing desperate measures: i saw in the store, two bucks for a handful of daffodils, deeply imported indeed. i grabbed ’em. paid no mind to the fact that their overseas flight might add an inch to the size of my old carbon footprint.

i cheated as well in the produce department. snared me a fistful of spears, asparagus spears. so far, i’m holding off on the berries. i’ve no need for ones flown halfway around the world. from a place where the sun truly shines, to here where it’s all a big hoax. (and besides, they are hard as rock those faux fruits, stripped of whatever it is that gives them a right to their juice-through-a-straw-sucking name.)

oh, goodness. i’m so sorry to take up your time with all this here whining. perhaps like the groundhog i should return to my lair. or whatever it is you’d call an underground hide-out where the sun never shines. and when it does, it’s still cold as cold gets.

hmm, sounds like i’m due for spring break. too bad that too could prove to be rather wrenching. i’m staying put, while the rest of the world i’m pretty sure has flights to places that don’t mess with your head. places where spring is what it is. and not simply a season that teases and taunt.

sign below if you too are bothered by all this recalcitrant weather. the winds that won’t warm. the snow that won’t go. the ice that refuses to melt. sing your sad song below. and maybe we’ll find solace in each other’s deep undying misery. and maybe some of you folks who live in sensible places–places where warm is warm, and not maybe–perhaps you can blow us some promising weather.

One Comment to “drumming my fingers for spring: the sequel”