you never know the lessons you teach 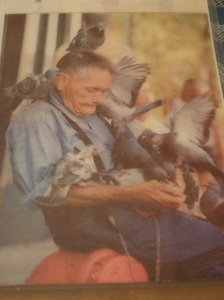 i had no intention of returning here to the pigeon man, but then i walked to my mail box the other day.

it’s not so common anymore for that little box down at the newspaper where i work to be filled with not just junk, but real live letters. oh, there are always a few, often rather sweet. but not like the one i got the other day, not really an epistle, a letter i keep coming back to, a letter i read and re-read because, on so many levels, it calls out to me.

it was written by a man who grew up not far from where the pigeon man–his real name is joe zeman, by the way–had his first newspaper stand. a little wooden shack, basically, at a busy downtown corner. that corner just happened to be near cabrini-green, the infamous public-housing project in chicago, where life could be, well, hellish.

gunshot was a sound that every child knew, knew to duck for cover when it came. elevators had long stopped working in the 15- to 18-story towers, so you ran for your life up stairwells that reeked of urine, or worse, and prayed you didn’t run into someone out looking for trouble.

the man who wrote the letter–his name is dwight taylor–was a kid there, lived there till he was 17, charged with armed robbery and murder, and went to jail. he sat in jail 11 months, he told me, till they finally let him out, not guilty after all.

my name is dwight taylor. i am a product of the infamous cabrini green housing projects. in the mid 60’s, my friends and i used to walk east on division street to rush street to shine shoes. there was a shack on the northeast corner of the intersection of division & lasalle. a man would always stand outside of that shack and feed the pigeons. there were times we would make fun of that man.

as time progressed, we would walk past that shack and just speak and keep on walking. as i grew older, i began to realize the significance of the man on that corner. i began to think about what he was doing on that corner.

i recall him being swamped with pigeons on just about every part of his body. i then came to the realization that he was not only doing a service for God, he was doing something from his heart. i came to realize his heart was not the size of the average person.

considering the minimal love and affection i was receiving at home, he was a blessing in disguise. mr. zeman will never know what impact he had on my life. as you are probably aware, life in the projects is no joke.

the many times we walked past mr. zeman’s shack, he will never know i grew to really appreciate the presence of him. i began to appreciate the presence of him because of a deficit of love and understanding i never received at home. when i witnessed true love, compassion and generosity being exchanged between mr. zeman and his pigeons, i realized i was truly blessed that God directed me on that path on division street.

my sister called me thursday afternoon to inform me of his demise. when i logged onto your website [the tribune’s], i saw a man i hadn’t seen in many years. nevertheless, it was the same saint i remember many years ago on division & lasalle street.

i called dwight the other day, told him i was deeply touched by his letter. asked if i could share it here, and with the letters to the editor at the tribune. i asked, too, a bit about his life today.

dwight says he’s had some financial troubles of late, so his email wasn’t working. said he’d graduated from technical school, worked at motorola, in the cellular division. but then, he said, he’d broken his neck in a freak accident–reaching for something up high on a shelf–and had to learn to walk again.

i asked if he was some kind of minister, or pastor, or whether he did some kind of preaching, because his letter sure read like that of someone who could pack a punch before the folks in the pews got one bit wiggly.

he laughed. said he gets asked that all the time. he’s not any kind of pastor, he said, just a man who says what he sees.

dwight’s story is sticking to me. like the best sort of shadow, it’s clinging all throughout the day, even through the weekend.

i couldn’t wait to let you read it too.

gives me goosebumps to think an old man cloaked in feathers could be a beacon of loving kindness to a kid growing up where love was scarce.

and that kid was smart enough to figure out just what the lesson was, and use it, a shaft of light on his murky trail, to escape what might have been.

but he didn’t stop there: he went on to live a life, and spew a brand of wisdom, that made me think he must have been a preacher, for the lesson he was teaching me.

you never know, sometimes, that you bumped into a teacher, until you realize, you just can’t shake the lesson.

dear mr. taylor, thank you oh so deeply. and mr. zeman, too. you’re quite a pair of wise ones, and you’ve shined a mighty light here on my ever-winding trail.

forgive me for a third take on the pigeon man. but i couldn’t not share the letter. i left it out all weekend for my boys to read. maybe in light of the few sad souls (on the tribune’s website last week) who found the pigeon stories worthy of the smallest thoughts, i found dwight’s letter so extraordinary. i am endlessly amazed by everyday saints, mr. taylor among them. your thoughts, friends.

5 Comments to “you never know the lessons you teach”