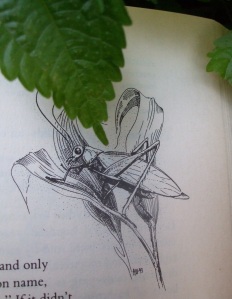 they come with the nightfall, as if the chirpity blanket that tucks in the darkness. or, maybe, some creaky old rocking chair, the one on summer’s front porch. or, perhaps, it’s the bugs’ busy signal, the one that seeps in through the windows, hides not the fact that they’re deeply engaged. care not a whit that we’re listening. listening in on the lovemaking. if tonight that’s the pulse of their call.

they’re there now, as i type. the light of my desk, the glow maybe that calls them, the beacon.

maybe they think i’m a firefly. maybe they’re chirping for me to scram, to leave them in peace. to sing till they’re sated.

they are the midsummer’s night chorus: the crickets, cicadas and katydids.

they are, in the pantheon of bugs, the ones with the throats–well, you’d not be a fool if you thought that, thought it a throat that’s making that racket, though it’s not.

it’s actually a wing with hard ridges, some 50 to 300 bumps, if you’re counting. and the tip of the other, the plucker. right wing rubbing the left wing. that’s all it is. like a fingernail pinging a comb. or a fiddler picking a whole mess o’ strings.

it’s a hoedown of crickets out yonder. there must be a fine doh-si-doh. or some sort of orthoptera reel.

they’re the bugs who wake up the babies. put the old folk to sleep. the ones who squeak through the night: “it is august. summer is slipping. savor it now while it lasts.”

they are ancient, and so is their song. in china, in the tang and the song and the ming dynasties, they were worshipped. concubines, holed up in palaces, it is said, carried them to their night pillows. kept them locked in gold cages. felt at one with the loneliness of their song. serenader and serenaded, both knowing the ballad of the caged and empty heart.

when not serenading, the crickets were put in a ring and left to fight to the death. poor things were starved before matches, to make them mean and quicker to bite the other dude’s head off. dang. cruel sport.

in 13th-century china, in fact, there was an infamous cricket minister, accused of dereliction of duties due to his obsession with cricket fighting. and two centuries later, the cricket emperor, ming xuan-zhong, whose zeal for the sport prompted all sorts of trouble.

the little bug with the big noise made for hot handling, big bucks, untimely demises–and not only the crickets’.

one chinese scholar writes: “each year, thousands of carefully selected crickets were sent to the capital where many people’s financial fate was placed in the mandibles of these insects.”

he then recounts this sorry cricket tale, as it was written in what’s known as the minor history of the ming dynasty: “when he saw a good cricket, an officer of the local rice granaries exchanged it for his best horse. while he was away, his wife opened the pot to peek at the special cricket which promptly jumped out and was instantly eaten by a cockerel outside. the lady was so scared that she committed suicide. her husband, upon returning and seeing his dead wife along with the missing cricket, also took his life.”

no wonder, when the cultural revolution rolled along under chairman mao in the radical 1960s, the crickets went underground, abandoned as too bourgeoisie. but they’re making a comeback.

heck, if you happen to be in beijing, say tomorrow, feel free to flip through the yellow pages. guaranteed, you’ll find the association for cricket fighting right there in the listings. only you’ll have to look that up in chinese.

when you do, when you call them, they’ll be able to spill you the skinny on the next big cricket match (and i don’t mean the one with the stick and the ball).

stars here are the bugs. and it’s truly high tech. think vegas with bugs. they use zoom cameras, i’m told, to catch every kick and that fateful last bite. they broadcast on super-sized screens, so no one misses the thrill.

frankly, i’d rather watch fly-fishing. but no one’s called me to ask.

think not that china is alone in its cricket fixation. all over the world, the singing night bugs of summer hold particular powers. in brazil, a cricket’s chirp means impending rain, or financial windfall; take your pick. a black cricket in the room, though, bodes illness; gray, money; green, hope.

in northeast brazil, it means death. so a cricket that dares to chirp in the house is, quick, put to the underside of the swatter. a bit south in brazil, along the atlantic, a constantly chirping cricket means someone is pregnant. but one that pauses tells you money is coming.

in barbados, a loud chirp signals the coming of cash. you’d be a fool to quash or evict a cricket in bridgetown. fact is, if you’re a cricket and you can’t keep it down, catch the next plane out of brazil. hightail it off to barbados.

the ol’ bugs, plainly, are mighty amazing. for starters, the inch-long squeakers with the power thighs and the loopy antennae lay eggs in the thousands, a statistic that earns the ol’ girls more than a bit of alpha-girl status out in the bug world.

the katydid, a close cousin, was considered an aphrodisiac of the first order back in the annals of chinese medicine in the 16th century. if you were, um, lacking in that department, you might be instructed to take one katydid and call the good doc in the morning.

and that’s not the least of it: a cricket, without a running start even, can jump 20 to 30 times its body length, three feet in the air.

by day, the noisy things hide–under rocks, clumps of dirt, the tuft of a plant. ah, but when night comes, those boys get to thummin’ their wings. the girls, they simply listen. their ears, by the way, are tucked under their elbows, or more precisely, a tympanic membrane just below the joint on their front legs, which really are arms, thus the term elbow.

people who decipher these things tell us the cricket chirp range is one octave higher than the highest on a piano. and depending on what it’s signaling–love, alarm, fightin’ words–it breaks its call into code, anywhere from five to eight pulses per chirp.

but i think the no. 1 cool cricket thing is the fact that a cricket can play thermometer.

check this out: it’s called dolbear’s law, and it works like this. count the number of cricket chirps in 13 seconds, add 40, and you’ve got you the temperature. if you live in the western u.s., your formula is tweaked ever-so-slightly: you count chirps in 12.5 seconds, then add 38.

the national weather service forecast office will do the work for you. just click here , and you’ll land on their handy-dandy cricket chirp converter.

ah, but enough with the science.

time for a little cricket literature. nathaniel hawthorne called the cricket song “audible stillness,” wrote that, “if moonlight could be heard, it would sound just like that.”

john keats, in “on the grasshopper and cricket,” wrote that “the poetry of earth is never dead.” emily dickinson says that “the crickets sang/and set the sun/and workmen finished one by one/their seam the day upon./and so the night became.”

if i had to vote for the best cricket bound in a book, i think i’d pick chester, from george selden’s “cricket in times square.” chester, who makes his way into the story in a picnic basket, has the amazing capacity to imitate any music he hears on the radio.

imagine a million chesters just outside your window. august, indeed, would be a month of undying delight. instead of just plain squeaky.

all righty, cricket lovers, sign up here with your tales of cricket swooning. your favorite cricket poems, perhaps? whatever moves you, let it rip. and for your listening pleasure, friends, the just-home-from-camp technical committee has dropped in this little cricket chirp for your midsummer’s delight. just click down below. let your heart go. chirp. chirp.