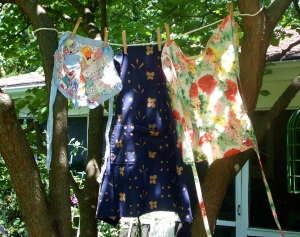 can’t say that i’ve got much practice here under my belt. but i do know how to string a rope, and i do know how to work a clothespin (do not laugh, i have seen a human stymied by what to do with the little springy wooden thing).

as evidenced by the pathetic excuse for hanging out the wash, (yes, yes, up above, that is the wash, it is not a bad example of a pup tent without the pup) this here is a class for the starter-outer.

but what the heck, the countdown to summer solstice is on, the great white clothes dryer in the sky was high, was burnin’ the other afternoon, and i’d just dunked a few years’ dirt off an heirloom that started out its life under the hot aegean sun in a little greek village, long long ago.

that ol’ cloth was yelping to be laid out where it belonged, where it could bask once again in the noonday sun. never mind that the bright light around here is a paltry shadow of its big fat greek cousin, that cloth was yearning to be sunned. i know it was. i heard it with my own wholly un-greek ears. some things you understand in any language.

that cloth, given to me by my landlady maria who started out handing me a set of keys to the upstairs of her little worker’s cottage and went on to become a mother/sister/best friend before she died too, too young, was made of cotton picked by her mama back in greece. her mama pulled and twisted the cotton into threads, set it on a loom, made the long smooth swath that is its middle and, then, crocheted the ends.

it’s been mine since the day maria cracked open the trunk she brought with her when she came to america, and carefully lifted out her mama’s blessed handwork. you would have thought she was handing me a newborn baby, the way she lifted, cradled, laid it in my open arms.

it was not about to be tumbled in the orphan-maker dryer in my basement. i say orphan maker because my dryer has a way of eating socks, and thus, piled atop the dryer now there is a little pile of socks who’ve lost their mate or who have had a hole bitten out of their big or little toe. my dryer is not picky; it gets hungry sometimes and takes a bite out of whatever it is tumbling.

i was not about to feed maria’s mama’s tablecloth to my dryer. clothesline 101 was in session.

now, i am enough of a clothesline girl to have my very own bucket of clothespins and what was once a respectable coil of rope. seems the rope’s been snipped over the years, for this backyard tent and that emergency suspension bridge. but there was enough for me to tie two girl-scout knots on the backs of two lawn chairs, and tug.

besides being just long enough to fit maria’s mama’s tablecloth, my clothesline had one other big thing going for it: it was deliciously inconspicuous, which here on the leafy shore where they might fine for such backyard nuisances, was a very good thing.

i could hang out to dry without the neighbors even noticing. and for a starter-outer that’s a wise beginning.

don’t tell the neighbors, but i could get hooked on hooking drippy clothes over droopy lines (note to self: work on those girl-scout slip knots; mine were rather, well, slippy, too slippy, indeed).

i could feel that old cotton soaking up its long-overdue doses of vitamin D with every passing hour. i watched that cloth transform right before my eyes, from limp, wet could-be-bedsheet to stiff, white heirloom soldier, ready once again to take on my table.

imagine what the sun could do for my undies.

oh, speaking of undies, in the olden days, the ladies taught their clothesline tutorees not to hang them out where all could see. they instructed that a girl who “hangs a proper line,” always pins her undergarments to a private line, one strung just beside the furnace where they’d be free to drip and dry unexposed, with a proper dab of dignity, puh-leez.

i am sure such a code exists today for those who’d dare to dry their undies here on the leafy edge of lake michigan. although just the other day, here in leafy land, i saw a woman, yes i did, strip off her undies, stand buck naked at the corner, while i hurried my little fellow quite quickly to the other side of the street, my hand over his eyes, as he asked and asked, as one then two squad cars screeched around the corner, racing to the scene, are they taking her to jail?

oh goodness, it gets rather shocking here on the leafy shore. i finally had to tell him that, yes, they might be slipping handcuffs on her naked wrists. for you are not allowed to take off your undies in the middle of the street. and not just because it’s leafy land. which gives me pause when thinking what could happen around here if you thought to string your thong on some taut rope. an outdoor rope, i mean.

oy. back to clothesline class. did you know that until the 1800s there was no such official thing? oh, sure, whoever did the wash might have draped it over bush or tree, perhaps a covered wagon.

but those who know these things, suspect it was a sailor’s wife, or at least his lady friend, who thought to yank a cord between two poles and hang her sheets like sails.

the first clothespin was patented in 1832. and, according to the u.s. patent office, more than 150 clothespins were patented between 1840 and 1887. imagine all those laundry ladies believing they’d dreamed up a better clothespin. drawing pictures, making mockups, sending letters off to washington, waiting for reply. oh, i just love a good invention. makes me want to whistle yankee doodle dandy. or something.

the clothespin itself was made into art, which you can see if you too take a trip to the nation’s capital and stroll through that wonder of wonders the smithsonian institute. before the days of cellphones and headsets, people took the time to carve birds and flowers into the knob tops of their clothespins. you know, the little clothespins without the springs, the original ones, actually, the ones that look like a head, slumped shoulders and two long legs.

it is worth reclaiming, at least on a breezy sunny day, the tranquilizing act of plucking freshly laundered soggy clothes from a wicker basket, giving them a shake, reaching for a clothespin, pressing the back-up between your lips, pausing to watch the passing clouds, then hanging up your jeans, your bedsheets, heck, your all-cotton, waist-high briefs (no tantalizing the neighbors there, i assure you).

after that, step back. let the sun and breeze do their thing.

who needs prozac when there is laundry to be hung?

who cares, anyway, what the neighbors say.

ladies and gentlemen, rev your laundry engines. i know my blessed mother-in-law is an ardent believer in the power of the clothesline. heck, i think she’ll even take a sunny day in winter. anyone else with a clothesline tale to tell? or a story of spotting someone strip down beyond her undies? all’s game in clothesline 101.