every year, a cast of characters 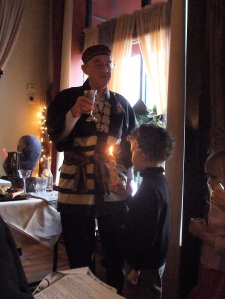 every year. count on it. there will be characters. they will be many. they will be deeply, richly, crazily creviced, shadowed, colored.

it is as much the order of the seder as the haggadah itself. the table will spill with character. ooze with it. rumble, tumble, jumble, full of characters.

wafting just above, that’s character no. 1. the tall one, that is.

that’s ted. rebbe ted. the one wrapped in japanese prayer robe, tied with obi. the one raising the first of four glasses of vintage manishewitz. the one we drive miles to be with every pesach.

ted, a rabbi and cantor without a congregation these days, is a therapist; spends his working hours trying to screw on people’s heads, or at least screw them on a little less wobbly than when they first wandered in.

but mostly, always, ted is a character. ted’s eyes, i think, must gleam even when he’s sleeping.

at ted’s seder, things are, um, unorthodox. ted reaches in a bag and pulls out yarmulkes from around the world. sometimes he wears his tibetan temple headdress. he always wears his japanese robe.

at ted’s, you do some chanting. you close your eyes and chant the vowels. you do not close your lips when chanting vowels, he tells you, and thus you assume a posture of openness that ted thinks the world truly deeply needs. you chant deeply, ahhhhhhhhh.

at ted’s, you eat sumptuous french hors d‘oeuvres. (and then you find out, oops, they are not kosher for passover; maybe that’s why they tasted so good.)

i tell you the story of ted because in bringing my children to ted each year i bring them to one of the most essential gifts a parent can give a child: the gift of the one who’d never paint by numbers, the iconoclast, the eccentric, the character. the deep and rich and soul-expanding knowledge that life is splashed with vibrant colors.

one of those colors is the color ted.

it brings unending joy to me to bring my children to tables where i know they will hear voices they do not hear at home. home is where the grounding happens. home is where you learn that the parachute has a safety cord, and you can pull it any time.

other people’s launch pads are where you learn to lift your foot off the ledge, set it in mid-air, and feel the fall, but then the updraft, carrying you, lifting you to places you’d never see from the safety of that concrete ledge.

last night we soared with ted. heard his salty brand of politics. took in his dash of new-age mysticism. felt the gestalt of letting go of that by which we’d been enslaved. watched him raise a yale sweatshirt, oy, to teach a lesson on hebrew light and perfection. (right there, spelled out on yale’s emblem, in hebrew letters, who knew? found out that centuries ago, at the founding of yale, patrician of patrician schools, hebrew was required study. ted, by the way, went to yale.)

tonight we congregate again. at another table of eccentrics. they will be the ones with whom we’ve worked for decades. the ones with whom i’ve “sedered” for 25 years, before husband, before children, and every variation since. a cast of newspaper kooks. my boys, all eyes and ears, will learn much that i won’t teach them.

besides the wine glasses filled with jelly beans (the kinder version of fruit of the vine), the flogging each other with scallions, yes, scallions, the pulling out of little plastic plagues, there is the annual putting of passover lyrics to broadway tunes.

we drive home each year, from nights one and two, with bellies aching. not from all the passover matzo kugel. no, no. from laughing ’til our sides feel split in two.

we are blessed. so very blessed.

all my life, far back as i can remember, i have loved the odd ball. the duck who waddled to his or her own drum beat. at my mid-century mark, i survey the landscape of my life and see i’ve assembled quite some cast of characters.

my almost-man-child told me recently that one of the most lasting lessons he learned from his uncle david was when david spoke of a brilliant friend of his, a friend with phD in sanskrit, a friend who studies global drumming and, for a long while, drove a cab in new york city. david, it seems, told my almost-man-child: “he really is a kook.” and my almost-man-child told me that the way he said it, he knew that uncle david meant that to be a kook is a very noble thing. “that’s how i learned i should never march to other people’s drummers,” said my boy who decidedly does not.

my prayer this pesach, my prayer that already has been heard on high, is that all the children, not just my boys, hear a world of many drummers. and come, as often as they can, to a table that spills with kooks and characters and bold eccentrics, a table, every first-night seder, led by rabbi ted.

who, by the way, i love with all my heart. even if he makes me close my eyes and chant the vowels.

do you collect characters? do you see the beauty in those who color outside the lines? do you, if you have children, or love children, or are a child at heart, seek out tables where you know they–and you–will hear voices unlike the ones they–and you–hear at home?

6 Comments to “every year, a cast of characters”