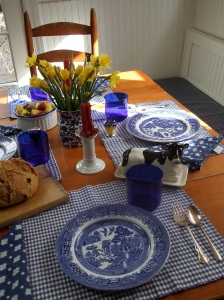 it hit me, as it often does, in the blink between up and sleep. not even fluttering eyes, and already the lunge ball gets me. right in the belly.

the weight of the week just past, the specter of the week ahead. it doesn’t usually collide on the weekend, but this weekend it did. saturday morning felt too much like a monday. a blue monday, most of all.

i did not do a one of the things on my nerve-wracking, energy-sapping, tummy-rumbling list.

nope, i grabbed for old spoons and plates. i found solace in old willow china, chipped around the rim. i found delight in antique silver, worn to dull through decades of thumbs and fingers, lips and tongues, slurping, spooning, licking, lifting.

i ditched the deep red cloths of winter, pulled out the checks of blue and white. laid blue on blue on blue. watched the morning light stream in. it made blue shadows on the wall.

i tossed, at last, a mound of old dead apples, apples that long ago required cpr. i dusted out the wooden bowl in which they spent the winter. tucked it on a shelf.

filled an english pitcher with fists full of daffodils.

all the while, i worked alone.

the gods of sleep, they blessed me. even though they forgot to protect me from the onslaught of waking up with a lead weight in my belly, they kept everyone else in the house in slumber till i woke them at half past ten.

you can imagine, i’m sure, what three unbroken hours of solitude and silence do to soothe a harried mama’s heart.

i found, in setting a springtime table, that i was chasing away the blues. or keeping them at bay, anyways.

i have, since long ago, a little girl keeping watch as my grandma put out silver napkin rings and damask napkins, egg cups and a silver rack for toast that i might have thought would hold up bills and letters, or baby bicycles perhaps, found joy in setting tables.

i’m neither martha stewart, nor minimalist when it comes to tables. you won’t find me glue-gunning little bunnies, nor waxing autumn leaves.

but you will find me sighing as i put out plates given to me long ago, by a man whose house we bought who’s probably no longer still alive. and you will find me thinking all about the friend who gave me old spoons for turning 50.

as i set the table, i gather souls, some of whom i’ve not seen for decades. but who are never farther than the drawers and the cupboards where i keep old things, beautiful things. things sometimes chipped, often worn, but always with a story.

i set stories on my table. weave a half century, now, of history into what you might see as simply plate and spoon and cup. but not me.

i run my fingers over the plate of a gentle man who wept as he left behind the house he’d carved with light. i lift the cobalt glass i first gasped at when i spied it on a shelf at a store that is no longer, a young bride picking the things she’d set on her table till death did they part.

i have no clue if my grandma soothed her jagged nerves unfurling damask cloth, making paper place cards affixed with bunny cut-outs, or jolly santas with rosy cheeks. she would never have let on, if in fact she did.

but i know that by the time my boys tumbled down the stairs and came upon a springtime table, i was less a frazzled mama and more a woman who’d found a balm in bringing stories to my table.

anyone else find solace in the laying of a table? in the textures and the patterns, the colors and the curves? in, most of all, the stories and the souls who are carried to the table?

4 Comments to “blue vs. blues”