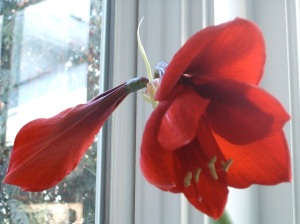 like a recalcitrant boy in the corner, my amaryllis it did nothing. day after day–nothing. not a sprout or a shoot or a peep.

so much so that at one point i thought it a dud. a firecracker without fizzle. i’m not one to chuck things, but this baby was nudging me in a corner.

tucked in the loamy soils the day after thanksgiving, it sat idle straight through advent. i had done what it wanted: gave it light. gave it space. even replaced the cheap green plastic pot that it came with, with a sporty red aluminum bucket. what more could an amaryllis want?

‘bout the third week into this non-adventure, when i had decided its sole purpose in life was to take up a chunk of my corner, place holding forever, i put in a call to the bulb lady; you’ve met her before here, jennifer brennan, my life coach on all things dug in the ground.

“it’s gonna grow when it wants to, and the only thing it’s going to please is itself.

“might be christmas, or valentine’s day, or easter. no way to know.”

hmmm, i said, eyeing my adolescent boy with the green tip popping out of the pot.

considered blaring some tunes. but then figured the ones that i’d pick would be so out of date, the poor thing would stay hunkered in soils just to spite me.

so i went on with my life. cast ever-so-casual a glance off to the corner. but not too often, and only when the teenage bulb was not looking.

and then, well after christmas, somewhere around epiphany, appropriately enough, the ol’ boy decided to stretch. must have been getting out of bed sometime in the mid-afternoon. like my own 13-year-old only dreams of being able to do.

it stretched and it stretched, inspiring hope, hinting at joy. if i waited. if i did little but sprinkle the occasional few drops of water.

yesterday, all day, it was like watching the teenager suddenly decide there was someplace to go. every time i turned around that red trumpet was blaring a few extra notes.

and then, when i walked in the door after the ol’ car had died and my key ring exploded all over the parking lot, losing a key in the process, i shot a glance in the corner and my heart did a dance.

just when i needed it most, the ol’ boy he was blaring. mouth wide. tonsils dangling. if he’d been a sick teenage boy, i could have swabbed the germs right out of his lungs, he was so open wide.

i stood there and marveled. he had moved when he wanted to, all right, but somehow–in that magical, mysterious way of the world–his moving came just when i needed it most.

and i, as their long-awaiting mama, could not be more tickled. they are, in the end, red triumphant, oh so triumphantly red.

anyone out there waiting and waiting for triumph, triumph in any color? anyone with a tale of life unfolding on a time table all of its own?