little legs under the covers 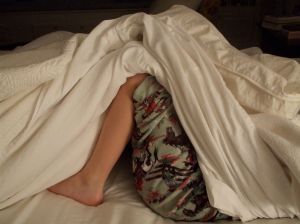 some time in the thick of the darkness, those little legs climbed into our bed. he was sneezing, he told us, in his own bed. too much cat curled on his covers.

he was warm. he was soft. he was tender.

all night his sweet little self rolled up against me. we draped over each other, limb over limb, arm around middle.

it is like incubating all through the night. it is, i pray, seeping the best of us into each other.

my little boy, by day, can be, um, a bit of a handful. he’s the youngest by far of anyone around. so he makes up for it with whatever plot he can imagine. we want a dinner conversation. he takes to under the table. we say turn off the tv. he darts down to the basement where he thinks we’ve forgotten there’s yet another tiny screen lurking.

he said something in his sleep last night. something about God. i haven’t a clue of the rest of the story. but i know for a moment he was talking to God.

as i lay there beside him, drinking in the tender side of the boy, of the night, i marveled at how it was that he knew that this particular night, more than many, i needed the gift of the boy with the legs under the covers.

there won’t be many more nights when our bed is his refuge. little legs get big, forget the way in the dark into the room with the extra-thick covers.

but for now, there’s a boy, there’s a bed, there’s a mother. and she is softer this morning for the long night with the soft roll beside her.

Filed Under: little one, mother and son, motherhood, motherlove
Tags: motherlove : sleeping side by side

5 Comments to “little legs under the covers”