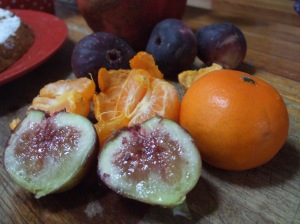 winds are howling. the chimney is hiccuping (rather rudely), with every passing blast of gale-force updraft. cigar pods from boughs on high are poinking needle-like into the heads of anyone fool enough to tiptoe outside. the last few berries from the american cranberry, the scant few that haven’t been gobbled by blue jays and high-wire squirrels, they’ve been slammed to the ground in a bloody blob this morning.

a few minutes ago, i glanced out the window and thought it was raining itty-bitty locust leaves. then i rubbed my eyes and realized it was a hallowed eve’s snowfall. snow blustering, maybe.

the sky is pewter. the air so cold even the cat is howling in protest.

all in all, it seems surround-sound signal from the seasonal trumpeter: time for burrowing to begin.

autumn as october teeters towards its close, as november waits in the wings, when golden glow gives way to stovepipe gray, when stripped-bare branches scratch at endless sky, autumn is the season to hunker down, to draw in, to turn our attentions toward the essence deep within.

all this dialing down, buttoning up our nubbiest sweaters, slithering on socks for the first time in months, it’s all a call to haul out the soup pots from the back of the cupboard, to reach in the fruit bin for the season’s offerings — the ones that, in keeping with autumn’s ethos, reveal their succulence only after peeling away, digging in, extracting.

if it’s true — as a wise man taught me last week — that God wrote two books, one of which is the Book of Nature, then we’d be fools not to read along, not to inhale the verse of the shifting light, the shadowing that autumn’s depth brings.

if it’s true — and why wouldn’t it be? — that God in God’s Infinite Genius imbued every corpuscle of creation with a map pointing to the interiority of the ones charged with making sense of all this, the ones for whom understanding leads to illumination, which leads to enlightenment, then wouldn’t it follow that one of our holy callings is to heed the wisdom of the bough and the sky and the crunch underfoot?

and so, to steep myself in autumn’s teaching, i step outside into the whirl of this hallowed day’s preamble to winter: i feel the bumper crop of goosebumps on shoulder and thigh and nook of my neck; i inhale the faint whiff of logs burning from somewhere not far away; and, without much dawdling, i scurry back inside and do as instructed.

i pull on another sweater, i plonk on the couch, and survey the stack of pages waiting nearby. i begin to consider pumpkin — and not for carving, for roasting. i press my nose to the glass, set my gaze skyward, watch gray clouds scuttle by.

i might be calling it quits on puttering about the garden. might tuck away the hose, the trowel, the watering can. might gather up the bird houses, replenish the bird-seed bins. the deepening is upon us. time to consider those who depend on us to make it through bitter days ahead.

the wisest thing to do, i reckon, is begin the prayerful coiling, the tending to what’s inside and too long left cobwebbed. it’s the season of introspection, and i’m settling in to do as so divinely ordered.

because tomorrow is all saints day, a feast day best honored by honoring the saints who populate our living breathing days, i’m beginning the nominations here with a beloved neighbor named sarah, who moved home a few years ago to care for and feed sumptuous nightly feasts to her aging mama and papa. just yesterday, sarah’s mama could not be awakened. she was breathing, but un-rousable, so an ambulance came and carried her away. she’s now deeply sedated in the ICU, where sarah and her papa kept vigil all day. late last night, sarah finally ferried her papa home, sat him down to feed him, then, in an act of compassion that purely took my breath away, she “rigged up his bed with pillows, so he can feel like he’s bumping into her” all through the night. sarah is saint number one in my book this year. please whisper a prayer for sarah’s mama and papa, and, deeply, for sarah.

who’s on your list of everyday saints? no need to name names. just a story will do…..and question number two: how do you begin your burrowing? what’s on your winter’s reading list?