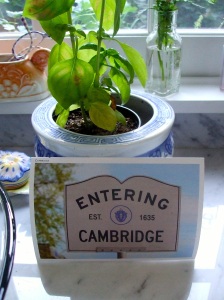 the “entering cambridge” postcard sits at the foot of my kitchen window, just to the left of the coffeemaker, just to the right of the cake dome, where the blue willow plate offers up the daily special. it’s a point on the domestic map that’s pretty much the epicenter of morning, noon and bedtime.

at the top of the stairs, now nailed to the red wall in The Professor’s study, there hangs another version of the very same sign: “entering cambridge.” only this one is carved out of wood, hand-painted by a new hampshire craftsman.

both serve as reminders, but more emphatically than that, they’re nudges, sharp elbows into the ribs. insistent “pssssst, you promised”s.

if a sabbatical — a year of thinking sumptuously — is really meant to transform your life, it demands an afterlife. the intent is not simply to pry open your cerebrum, insert wisdom and knowledge, then suture the whole thing shut and send you on your merry way.

the whole point, it seems, is to reshape, reframe, keep those brain cells ever open for business. ever famished.

there’s a beautiful ritual in judaism that at the end of shabbat — the holy interlude from sundown to sundown, friday to saturday — a spice box is passed around as part of havdalah, the candle-lit blessing that seals the sacred time, the end of the otherworldly 25 hours. the box is filled with star anise and clove and cinnamon bark, pungent aromatics. the thinking goes that as you take a whiff, fill your nose down to your lungs with those spicy notes, you’ll so carry the sweetness of shabbat with you into the week. you won’t confine the holy to one short slot of time. you’ll bring the holy with you.

so too sabbatical, a word with roots in sabbath, to rest, yes, but to restore, more emphatically.

it seems that our end of the bargain is that as disciples of the sabbatical, we are duty bound to bring home its truths, its wisdoms, and plant its seeds into our home soil.

i’ve long been charmed by the signs, posted at the entry point of every massachusetts town or burg or city. it might be the simple lines, the white crest, crisp black letters, the unassuming declaration of history in the middle line on each and every sign, “inc. 1635,” for instance, on the one for fine old cambridge, the city incorporated just 15 years after captain bradford planted his waterlogged boot on plymouth rock.

the first sign i carried home, carried home in duplicate, if truth be told, was “entering amherst,” the town where we tucked away our firstborn when he went off to college. the wee signs, in magnet form, were talismans to me. i stuck one in my cubicle at work, tucked one in my wallet, as if bumping into the forms in the thick of a workday, or while slipping out a dollar bill, brought me close, if just for a moment’s time, to my faraway boy.

quite simply, the signs charmed me.

now they inspire me.

here’s the backstory: on massachusetts avenue in cambridge, there sits a fine old map store, tucked between an ethiopian cafe and a funky hair salon. we passed it every time we drove to the little guy’s school. he and i noticed the entering cambridge signs in the window. we had a hunch they were for sale.

the little guy declared, on one of our winter drive-by’s, that we really needed to procure one for the professor, who’d already taken quite a shine to the fair city and whom we guessed might never want to leave.

it became a refrain: we’d drive by on the way to school, on the mornings when the bus didn’t quite happen, and the little guy in the passenger seat would declare we needed to get a sign.

so, at last, the week we were leaving, we did. we wrapped it, and left it beside the professor’s bed. so that, come father’s day morn, the day after we’d flown home, when the professor awoke alone in that third-floor aerie that had been our roost for all those glorious months, he’d find a stack of wrapped and ribboned packages.

unbeknownst to us, the professor had been thinking along the same cambridge lines.

lying on my pillow the last night i lay my head there, there was a postcard. an “entering cambridge” postcard. the very sign we loved, framed on 3-by-5 thick paper.

on the back, written in the wee small script of the man i married nearly 22 years ago, were words that made me cry. in part, he wrote that while it might seem odd to give an “entering cambridge” sign as we were leaving, the point was to make it a promise.

“we can always be ‘entering cambridge,'” he wrote, “always exploring, learning, loving, growing.” while it helps to be in 02139, he implored that we should enter cambridge even back in 60091. especially back in 60091, the leafy little life that’s ours when home sweet home.

and so it will be.

a few months before packing up the 27 boxes, three suitcases and every inch of otherwise unoccupied space in the little black sedan, i’d started a new mailbox in my computer, one i titled, “back home: soft landings. ideas to make it better.”

in that cyber-cubicle i tucked a host of hyperlinks and emails, all intended to stir brain cells. the poetry foundation (chicago-based) is peppered throughout, as are offerings from northwestern university (just down the lane), the writing center at northwestern, the writer’s theatre, and that stalwart of chicago indie bookstores, women & children first (where one recent summer’s eve, i stood in line with some 300, mostly women, to listen to none other than alice walker read). added just this week, the newberry library, and another fine indie shop, the book cellar, a bibliophile’s dream that offers comestibles along with book clubs. why not a root beer float with your ayn rand, or panini with your proust?

since i’ve been home, i’ve been noodling ideas of ways to oomph the intelligence quotient of my day to day. i’ve considered commencing a reading circle (i’m allergic to book groups, for reasons that partly escape me, but mostly have to do with the inherent exclusivity — who’s in, who’s out — and my lifelong skittishness of circumscribed memberships). i’ve been eyeing one particular list of 100 classics, and thought of starting with no. 1, “jane eyre,” and working to 100, walt whitman’s “leaves of grass.” (this would take a lifetime, i presume, but might as well get started soon….)

a dear friend of mine who returned from a left-coast fellowship a few years back, told me this week that, upon her return to the heartland, she and a gaggle of friends hired a humanities professor from the university of chicago, and for $100 per person per semester, they carried on in her living room several years of dedicated study of the history and literature of significant chapters of civilization.

so here’s where you come in, chair people. because i promise i wouldn’t prattle on if this wasn’t winding back to you.

i’ll be recasting the chair a bit, continuing on the adventure of “entering cambridge,” but finding ways to do it even when 997.5 miles from the vaunted 02139.

rather than rambling just from the heart, i will be more inclined to take us on adventures, introduce characters i meet along my ways. some weeks i’ll simply indulge in what i call “marginalia,” peeking onto pages where we find scribblings in the margins of whatever great reads land before our eyes. other weeks, it could be “yellow highlights,” great lines from literature and longform narrative unspooled here for your reading delights.

it would be grand if the table could become a gathering ground for whatever percolates your mind, your soul, your appetite for wisdom. and i’ve imagined, too, leaping out of the virtual, and having real-live gatherings of the chair, right here at my old maple table. or, better yet, beneath the whirling fan of the summer porch, where lemony waters are always on tap.

over this past year, i carried you all to cambridge in my heart, and in my omnipresent red-flowered marimekko backpack. now i hope to bring you all along as my days of entering cambridge emphatically continue, here along the great lake, the literary home of sandburg and bellow, richard wright and gwendolyn brooks.

what are some of your favorite haunts, preferred routes for cerebral exercise in the corner of the world you call home?